A Viking Burial: The Ancient Art of Saying Goodbye 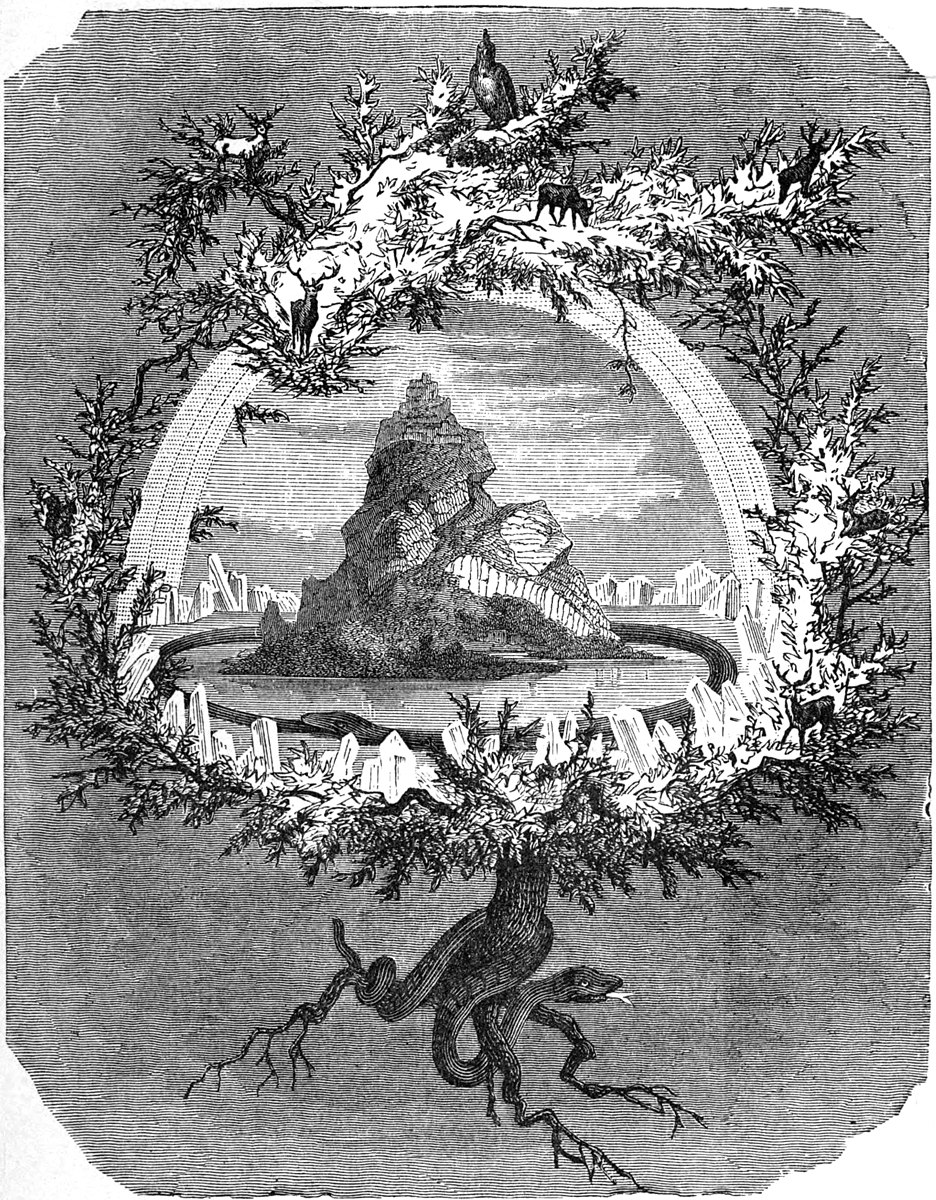 Every culture in the world has a tradition that makes them stand out from the rest. People take pride in what makes them unique, and that fact rings especially true for the act of honoring the dead. Indeed, so deeply is the idea of death rooted in societies, that individuals commonly undergo a “cultural shock” when they are introduced to different traditions and values. This notion of “cultural shock” comes into effect primarily when a person reacts to a unique culture in a particular way, ranging from mild interest to absolute disgust. This is by no means a modern phenomenon, however, as humans have been exploring and conquering the world for thousands of years. In fact, humans living around 800 CE would often experience new cultures every single month, as the barbaric men of the North Sea sailed along the northern coasts of “civilized” Europe. The barbarians would rape, pillage, and settle in the same coastlines that were once possessed by various flourishing kingdoms. Although the Northern invaders were usually few in number, the lands of Europe and the inhabitants of Britain alike would soon learn to fear them. They were known as Vikings.

When any one person hears the word “Viking,” they are usually quick to imagine monstrous, towering men who were proud to die in the heat of battle, or, alternatively, to imagine mighty giants who took to the seas in giant helmets with long ivory horns. Although some of those stereotypes are true, it is important to view the Vikings and their culture in an objective light. In reality, the Vikings never wore helmets furnished with horns. As it turns out, the Europeans went to great lengths to vilify the Nordmen, going so far as to stretch their depictions of them into the realms of historical fiction.1 Europeans and Anglo-Saxons alike were often quick to forget that the Norsemen had a beautifully rich culture that certainly mirrored the primal nature of the world around them. Today, historians are hard at work breaking the stereotypes that have long plagued the Vikings and their culture. In this regard, nothing has helped the historians in their noble cause more than the unique burials that the Norsemen commonly bestowed upon their fallen brothers. The two best accounts that modern historians have to reference the Vikings actually is the great Oseberg ship and the written account of Ibn Fadlan, who was a tenth-century Arabian traveler. These two sources provide important information for how the Nordic process of burial was approached.

In order for ancient traditions to be considered popular by the masses, it often becomes necessary for the creators of the tradition to cloak it in a particular religious identity. For example, when individuals are told that divine entities have powers over their lives, odds are that they will begin worshiping the gods or goddesses in hopes of pleasing them. Not only that, but they will be sure to follow the many laws that came from the “tall tales” that followed. In Nordic religion, the Earth is known as Midgard, or the “World of the Mortals.”2 When a Viking dies and leaves Midgard, he or she would end up at the realm of Hel. The warrior Vikings, however, had only one goal in their lives, which was to die heroically in battle, so that they might be taken by Valkyries to either “Valhalla,” “the Hall of Odin,” or, ultimately, to “Fólkvangr.” Fifty percent of any one group of dead Viking soldiers would be handpicked for one specific Hall, or section of Hel, in which they would eventually start their new life, training for what they commonly referred to as the “end of days,” an event known as “Ragnarök.”3

The Oseberg ship is known as the most extravagant burial ship ever recorded. The funeral ship was around 71 feet in length, consisting of a beam spanning almost 17 feet, and one mast standing more than 31 feet high.4 Being buried in a boat was fairly rare in the Viking culture, and was only put into practice for people of high social status or, alternatively, for a group of fighters who died with exceptional glory. Usually, Viking would see their dead cremated and buried in an extravagant urn. This form of burial was extremely popular because the Vikings believed that the smoke would help their dead reach the afterlife.5 The only reason that present historians have any idea of how the Norsemen dealt with the dead is from the few buried ships that were able to preserve their contents for over one thousand years. In particular, the famous Oseberg ship shows us that animals were a primary sacrifice for the Vikings. In fact, Vikings commonly placed the heads of the dead animals inside the boat, along with many different textiles and pieces of jewelry. The Oseberg Ship in particular, due to the sheer volume and rarity of the ancient grave goods stored on the vessel, is today believed to have once hosted a Viking Queen.6

In addition to the Oseberg ship, another great source of knowledge on the culture of the Vikings is the tenth-century traveler Ibn Fadlan. Thanks to the writings of Fadlan, the world has full knowledge of how Viking burials often took place, especially for people of power. As it turns out, Fadlan experienced firsthand the ceremonial death of a chieftain, the leader of a sub-Viking group near the Volga River.7 His unique account of the event allows historians to unearth the fact that slaves were a big part of the ritual, participating in it so that they might later serve their master in the afterlife. For female slaves, involvement in the ritual was no small feat. As per tradition, they were expected to consume dangerous amounts of alcohol and have intercourse with every man in the village. After the event, they would be expected to then “have a vision” of their former master and report what they observed to the rest of the village. At the end of the vision, she would be sacrificed by the representation of the Angel of Death to join her master in Valhalla.8

Unlike other cultures, there is no universally agreed-upon reason for the burial of goods and items with the dead Vikings. In fact, the subject is highly controversial within the historical community, and the various explanations for the act often range from very simple to amazingly complex. This is a direct result of the fact that much of what we know about Nordic history was actually written by other cultures, and not the Vikings themselves. A popular theory on the matter is that the Viking people believed their dead must be prepared with the weapons and gifts of their old home in order to give them the strength needed to fight harder, as they were ultimately expected to fight the greatest battle in history in the afterlife, which, according to their religion, would cause the end of the world.9 Scholars also believe that Vikings would increase the value and amount of grave goods depending on the individual’s worth in the village.10 While the notion of burying goods with the dead is certainly not unique to the Vikings, it works to show the similarities between the Vikings and other well-known cultures, such as the Egyptians or the Inca.

Even though the Vikings are commonly thought of as nothing more than barbarians, they had very long and complex sets of rules to follow when handling both their society and their honored fallen. The Norsemen believed that boats symbolized safe passage to their next destination, whether it was during their lifetime or after. The boat burning itself was not a common tradition, and most likely rarely occurred, due to the costly construction of the vessels at large. In addition to the cost, the shipbuilders were not encouraged to create ships purely for the act of burning them; indeed, if the Vikings often burned the boats that they placed the dead upon, then the world would never have had the chance to study the aforementioned Oseberg ship.11

Because the Vikings were not a fully “civilized” group of people, they had many traditions unique to their culture alone. One of their most widely-recognized beliefs was their insistence that dying in battle was better than dying of old age, because it allowed them to prove their worth to the gods. In addition to the cause of death, many Norsemen believed that the preparation of the body for the journey after death was equally as important. According to the writings of Ibn Fadlan, historians now know that Vikings certainly believed that there had to be something beyond what their own physical world implied. It was just getting there that raised questions and to solve it, they started the traditions of being burned in cremation and having the funeral mound mostly be boat shaped to give the same effect of an actual long boat for traveling purposes.12

Many people today have grown up with stories from religious texts that dictate the values of “right” and “wrong.” The Nordic people were no different, but their “wrongs” were often committed under the influence of “Loki,” the god of tricks. Loki, like all the other gods, were believed to exist as real people on Earth, rather than in another realm altogether. Subsequently, when the stories of Loki and his tricks were told to the Vikings, they would often be struck with fear.13 For instance, a common tale in Viking folklore describes a scene wherein Loki wished to play a prank on Baldr, the son of Odin himself. Loki killed Baldr, and the gods begged the goddess of the underworld to release him. Eventually, a bargain was made, namely, that Baldr would be released from the underworld if every living thing in the cosmos were to shed a tear for him. Loki heard of the deal and, after transforming into a giantess, intentionally failed to cry for Baldr. Accordingly, Baldr was cursed into staying with Hel. Because of Loki’s actions, Odin forced him to be bound to a cave and tied down while snake venom pours on his face until the end of time.14 After hearing of Odin’s curse on Loki, the locals understood the consequences that failing to please the gods and goddess could bring.

The Viking era was one of the most dangerous and traumatizing that Europe has ever experienced. However, the pendulum of history always swings both ways. It wasn’t long until Christianity made the old Norse religion obsolete, and tore the seemingly paganistic Vikings asunder. Some scholars are quick to argue that the Vikings were only labeled “pagans” because they didn’t worship the Christian God.15 Regardless of the nature of their religion, the Viking era was relatively short and only lasted for three centuries. Although the true nature of their culture and history is still unknown, Nordic culture still deserves a special spot in human history. If not for their religion and their infamous raids, they should certainly be remembered for their spectacular funerals and their deep understanding of death.16