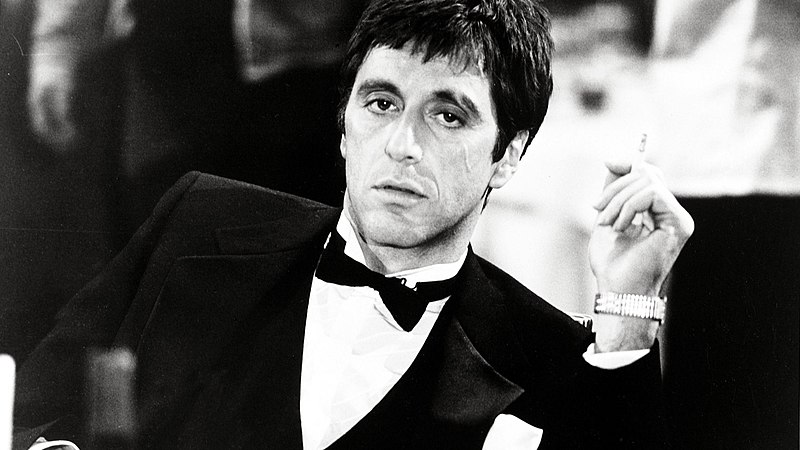 There are very few men who have been able to simultaneously live in public and successfully break the law, all while consistently getting away with it. One of the most notorious people to have done this was the late mob boss Al Capone. Al Capone ran an illegal operation which, adjusted for inflation, would have been worth over a billion dollars today. Apart from being very respected and feared by his rival gang members, everyday people often gave him credit for being successful against the tremendous odds he was facing, even if they didn’t always agree with his goals.1 One of these people was the director of Scarface, Brian De Palma.

In the first opening scene of Scarface, the camera settles on a man named Tony Montana, who is undergoing questioning by Border Patrol after having just migrated from Cuba. Originally, nothing about him really made him stand out from the other Cubans save a huge scar on the left side of his face. Throughout the course of the film, that very same un-extraordinary Cuban goes from working in a soup truck and preforming low level drug deals to ruling over his city as a Kingpin and controlling all of the drug trade within the district. Likewise, Al Capone was a famous mobster, also nicknamed Scarface, who ran an illegal mob that committed crimes consisting of gambling, providing alcohol during prohibition, and selling drugs, just to name a few.2

Capone was known for his life of crime, and although the government usually kept a keen eye on him, they never managed to officially catch him in an illegal act, so he always got away scot-free. What set Capone apart from other mobsters at the time was his unusual love for the limelight. Throughout Scarface, the audience is surprised as they observe one of the most wanted men in the nation throwing the classic “millionaire mansion party,” or taking a trip to the most luxurious club in the city to party like there weren’t people doing all they could to capture him. Just like Scarface, Capone never had any fear of being spotted and actually made himself quite noticeable whenever he would go out in public. Capone would often flaunt his wealth by taking strolls through Chicago, which was struggling through the great depression, wearing dazzling and expensive suits with his signature fedora.3

It is no mere coincidence that the main character of Scarface, Tony Montana, is seen wearing similar outfits throughout the film. Capone was also never known to be alone and had security with him at all times when he took trips through the city, which is another fact reflected in the film by the use of a secondary character: a best friend/body guard that seems to be there for Tony whenever he finds himself in a predicament that’s too much for him to handle. Capone never saw himself as a criminal, but as a business man and entrepreneur because of his success during the “roaring twenties.” He enjoyed the idea of people knowing that he had money, but he was also generous with it. He helped out people who were struggling during the tough economic times whenever the opportunity was presented, and this popular generosity resulted in crowds of people flocking to him for help even if they had never previously met.4

Another signature trait of Capone that made him very different from the average mobster was his personality, and the film captured it perfectly. Capone wasn’t the typical dubious and suspicious crime boss, but rather, was seen as a friendly man with an extroverted personality and a kind smile. In Scarface, Tony Montana was a very likable person and people wanted to work with him because of that. He would also crack jokes at tense times, and knew how to have fun with any predicament he was in. In real life, Capone enjoyed being seen in a positive way by the public eye and would often speak with the press to ensure that stories and articles written about him were not doing anything but making him look good. His amiable nature was reflected within the mob community, too, and when Chicago began to show signs of chaos, he took matters into his own hands and called for a “Peace Conference” to help control the out-of-hand criminal activities that were sprouting up.5

Of course, Capone knew that his smile would only go so far, as he many times claimed, “You can get further with a gun and a smile than you can with just a smile.“6 Capone demonstrated his friendly personality until he believed that his kindness could not help him achieve his goals, in which case he would often resort to his other known behavior: that of a cold–blooded killer. This conflict of personality was a trait that Tony Montana displayed openly within the film numerous times. The screenplay is not shy at all to depict the cruel and heartless nature that Capone utilized during his time as a mob boss. He was respected for his reputation, but feared because of his bipolar personality. The boss could be friendly one second, but when his personality changed, there was no going back, and that friendly man with a smile could quickly become a ruthless killer driven only by his personal desires. There are countless scenes in Scarface where Tony Montana totally loses his temper in a split-second, just like Al Capone. This bipolar trait and the sheer unpredictability of his personality and actions were exactly what helped him rise to the top.

Although Capone was one of the richest people in America because of his successful business and his strategies to avoid prosecution, the law eventually caught up with him. During his trial, the judge was faced with a lack of evidence for any of the many crimes, murders, and illegal activities that Capone had committed, and so the judge had no choice but to send him to prison for tax evasion. Close to the end of Scarface, we see Tony Montana enjoying his life in his extremely successful business, to the point where his problem is actually that he has too much money to account for. After getting set up by some cops, Tony is caught red handed and the audience was led to believe that he was finally going to have to pay for all of his illegal activities that he had previously committed. After Capone was sent to jail for income tax evasion, his life in crime fell apart.7

Due to his overwhelming popularity, he was sent to the most secure jail that the United States could provide at the time — Alcatraz. When he was finally released from prison eleven years later, he was no longer able to continue his life of crime, and the notorious gangster “Scarface” was gone. In his place stood a man who no longer took interest in crime, but turned in his criminal duties for fishing and living in his home in peace and tranquility.8 Mirroring Capone, Tony Montana had his lawyer successfully prove him innocent of all crimes that he had done save tax evasion. Immediately following Tony Montana’s conviction, his drug empire began to fall apart. His bipolar personality began to flare up more and more, partially due to his addiction with cocaine, another thing that Capone dealt with during his lifetime and especially during his rise and fall of success. This led to the character’s dramatic death, which has gone down in cinema history as one of the best epic finales of all time. Scarface ultimately died, and there is no Al Capone to left to live in peace and tranquility.

Al Capone owes a large part of his success as one of the most notorious and successful criminals of all time to his unique personality, one that allowed him to run crime in a way no one before him had ever thought of. While his Scarface persona may have died after he was released from jail, it lived on and was represented in the film Scarface, as well as through the media continuing the legacy of the world renowned criminal.