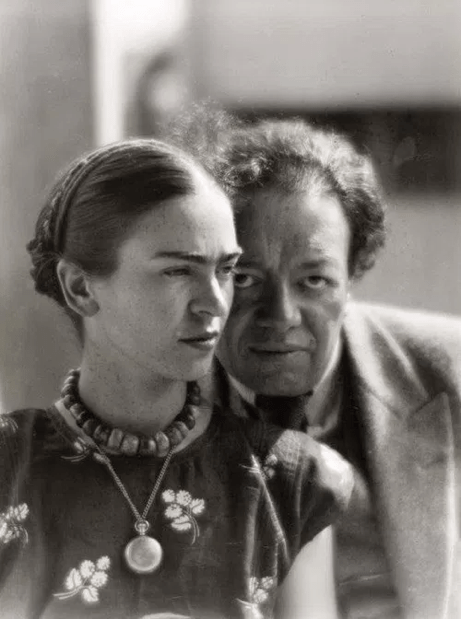 Frida Kahlo is one of Mexico’s most influential female painters. Her elaborate and detailed self-portraits exhibit painful imagery and naturalistic symbolism.1 She expressed originality by using surrealism rather than the reflections of dreams or fantasies. Each and every one of her paintings was a real representation of her own life, emotions, and personal experiences. Frida Kahlo was born in Coyoacán, Mexico in 1907. She was the daughter of a German-Jewish photographer and his Indian-Spanish mother. Despite her European background, Kahlo related to her Mexican heritage, embracing the style of indigenous women, which later became Kahlo’s iconic look.2

Traditionally, women are expected to find a husband, get married, and have children. A woman who marries her dream husband would expect to be content with her life. In the case of Frida Kahlo, she fell madly in love with muralist Diego Rivera, and she married him on August 21, 1929.3 Diego was Frida’s dream come true. She first met Rivera in 1922 at the age of fifteen when she enrolled at the National Preparatory School in Mexico City. However, Kahlo was up for a rude awakening. Her dream marriage turned out to be a life full of pain and disappointment after she discovered Rivera’s infidelity.

In the early stages of her marriage to Diego, Kahlo was swept with an abundance of feelings of happiness and love. We might call this the honeymoon stage of Khalo’s marriage and artistic career. Her paintings during this period of her life displayed just such a happy mood. She was proud to be Diego’s wife, and Kahlo was content and ready to show the world their wonderful love. In an early 1931 painting of hers, Frieda y Diego Rivera, her canvas features Diego Rivera and Kahlo holding hands. By holding hands, the artist is expressing her feelings of possession of Diego. It is well-known that Rivera was unfaithful to Frida throughout their marriage, and Kahlo was aware of his many affairs. By painting this picture, she makes a bold statement that demonstrates Diego as her husband.4 The painting reveals Diego as the extraordinary master, as he is holding a wooden palette and paint brushes. The painting is a reflection of the couple’s marriage at the time, expressing the theme of an adoring wife who loves her husband despite his flaws. This is ironic because, due to Rivera’s flaws and their future, troubling divorce, Frida’s career grew more and more independent from Rivera’s artistic shadow.

On September 17, 1925, at the age of seventeen, while she was attending the National Preparatory School, Kahlo’ was involved in a terrible bus accident where she was impaled by an iron handrail. As a consequence, Kahlo experienced a broken spine, pelvis, collarbone, and rib injuries. These injuries presented her with difficulties during a number of her pregnancies, the first of them occurring in 1932 while in Detroit. This miscarriage influenced her relationship with Diego. She had the normal motherly desire to have a child, but it became a major dispute between her and Diego.3 The sequel of hurtful events permanently damaged her fantasy marriage. The artist reached the reality stage of the marriage as she began to acknowledge Diego’s infidelity and betrayal.

Despite the disappointment of the miscarriage and her awareness of Diego’s various infidelities, the worst was yet to come for Kahlo. Her most painful marriage experience was in discovering Rivera’s affair with her own sister Christina. Although this was one of the many affairs Rivera had, it was the most painful one for her.3 After Rivera’s betrayal, the relationship declined quickly and led to the couple’s separation on November 6, 1939.7 The sorrow and regret Kahlo experienced while married had been expressed in her artistic productions. The emotional roller-coaster of her marriage and her final break with Rivera and her divorce drove Kahlo to a crisis and the forming of two identities. The way she resolved her crisis was by painting two of her most famous portraits. Unlike her husband’s elaborate murals, Kahlo’s paintings reflect the shocking lifelong emotional and physical pain she has experienced.3

Frida was heartbroken after the divorce; the perfect life she had hoped for when she exchanged vows with Diego had become a lie. Frida Kahlo’s first thematic painting, of 1939,  relates to her now ex-husband Diego Rivera. The painting was known as Las Dos Fridas (The Two Fridas). Kahlo painted a canvas full of sorrow and painful imagery. The piece shows two identical Frida’s, in which Kahlo explored her two different identities. Each Frida has different clothes and accessories, indicative of their different personalities. One of the Fridas is labeled as the Mexican Frida, representing the Frida that Diego Rivera fell in love with, symbolized by the style of her traditional Mexican dress. The other Frida is representing the European Frida, as she is revealing her new, emerging identity. Here she depicts herself as a broken-hearted woman wearing traditional Victorian attire. The color of the white dress is an archetype for purity. This Frida is an independent artist. In the painting, both Fridas’ hearts are exposed, and there is a vein connecting them both. In the left traditional European Frida, Frida is holding surgical scissors that have cut the vein reflected in her lap. The vein leads to the Mexican Frida, where she is holding a small portrait of Rivera.9 The details of the painting echo Kahlo’s identity struggles after her divorce, illustrating the pain she was experiencing at the time.

The second painting of this period of her sorrow was a self-portrait, called Autorretrato con Collar de Espinas (Self-Portrait with Thorn Necklace). Today, this painting is still considered one of the most meaningful and widely recognized self-portraits of an artist, due to its emotion and symbolic context. Frida painted the portrait during the same time of grieving in her marriage. The disappointment Frida experienced from Rivera’s betrayal was captured in this gloomy painting. The canvas was completed in 1940, the year after her disturbing divorce from Diego Rivera came to an end. The portrait displays a series of meaningful elements; for example, the thorns sinking into her neck are a symbol of the pain she experienced when her relationship with Diego ended. The thorn necklace is a well-known symbol of the painful Crown of Thorns that Jesus was forced to wear on the day of his death. In the painting, Kahlo is wearing her signature Mexican dress, which formed a part of her unique style. Other symbols include a black dead hummingbird with outstretched wings, a black cat, and a monkey.10 Each animal has its own significance; for instance, the hummingbird symbolizes the end of the couple’s marriage, the black cat on Kahlo’s shoulders is a symbol of bad luck, and finally, the monkey represents a gift from Diego. It indicates how her husband’s treatment made her feel.

The thematic context presented in her paintings have captured the attention of numerous artists. As she was able to use symbolic connections rather than physical ones to expose her repetitive cycle of earthly sorrow, Kahlo also incorporated various traditional Mexican elements representing her Hispanic heritage.7 Her divorce was a significant period for career growth, as she was able to gain independence from her husband’s artistic shadow.7 Throughout her life she was able to express her happiness, sorrows, and tragedies to mourn the difficulties of her life. Her inspiration evolved out of rough and traumatic events, such as her husband’s infidelity, their divorce, her miscarriage, and even her earlier bus accident. The dissatisfaction and misery Kahlo experienced when her marriage failed left her with a sense of emptiness because her dream was to live a joyful life with Rivera. Frida’s work was inspired by traumatic physical and psychological events. The three paintings examined here show different stages of Kahlo’s artistic evolution that parallel her personal tragedies and experiences. Her unique painting style developed from her ability to interpret and convey her own reality. Kahlo’s innovative incorporation of her suffering and personal experiences earned her admiration of people from the 20th century.9 Kahlo envisioned a life full of happiness. She wanted loyalty, love, children, and a giving husband, and instead, she lived a life full of pain and treachery. Her dream marriage turned out to be a dreadful experience that greatly influenced her artwork.