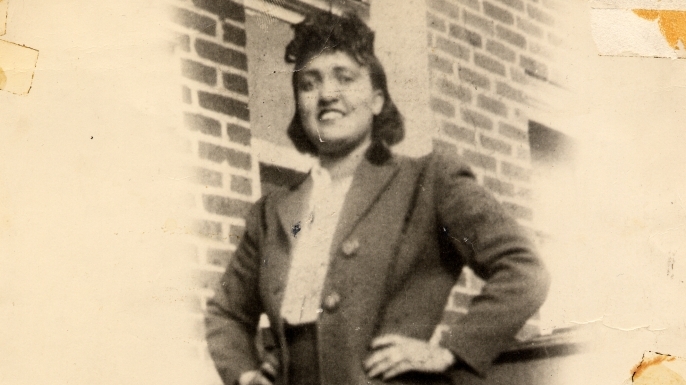 It was January 29, 1951 when Henrietta Lacks found herself walking into the “colored” section of Baltimore’s Johns Hopkins Hospital. An African-American mother of five, she was only thirty years old on this fateful day. This was the era of Jim Crow laws that kept African Americans segregated from White society. For this reason, African Americans only went to hospitals if they felt they had no choice. This was the case for Henrietta Lacks. This was her last resort. She had been feeling a “knot in her womb” for the past year, but it was only when she started bleeding outside of her menstrual cycle that she made her husband, David, drive her to Johns Hopkins Hospital. Howard Jones was the doctor that attended her, and upon seeing the knot, he recognized that there was indeed a large, cancerous tumor in her cervix. Doctors then took a sample from this tumor without Henrietta knowing and they grew these cells in a lab. Over the past century, the cells from this tumor have led to a revolution in the scientific community, but the woman behind them, Henrietta Lacks, has been largely forgotten. Who was this woman and how is it that she contributed so much to science?1

Loretta Pleasant, better known as Henrietta Lacks, was born August 1, 1920 in Roanoke, Virginia to John and Eliza Lacks. However, only four years after being born, Eliza Lacks passed away, so the family moved to Clover, Virginia. Here they lived among relatives on the family tobacco farm where their ancestors had worked as slaves, and Henrietta moved in with her grandfather and a cousin, David “Day” Lacks. Henrietta attended the local colored school until sixth grade, but had to drop out to help on the family farm. She, along with all her cousins, worked the tobacco fields. It was hard work, but her childhood was overall pleasant. Although they were cousins, Henrietta and Day started a romantic relationship, and Henrietta gave birth to their first child out of wedlock at the age of fourteen in 1934. It wasn’t until 1941 that the coupled married. Once married, they soon left the family tobacco farm and headed towards Turner Station, Maryland to work at one of the largest steel producing companies, Bethlehem Steel.2

Henrietta lived in Turner Station for the rest of her life. While Day worked at Bethlehem Steel, she stayed home and cared for her four children. However, things began to get strange for her right before she became pregnant with her fifth child. About a month prior to finding out that she was pregnant, Henrietta noticed that she felt a “knot” inside her. She immediately told her cousins, but they all decided to drop the subject. Then she got pregnant with her fifth child, and they figured that the knot she had felt must have been the baby.3 For Henrietta, life continued as before, and she even gave birth to her fifth child without the doctor’s noting any lump or abnormality in her cervix.

Yet three months later, when Henrietta made Day take her to Johns Hopkins, Doctor Howard Jones found a mass of tissue that he later described as “shiny and purple, and so delicate it bled at the slightest touch.”4 The lab immediately confirmed the tumor to be cancerous, but Jones did not understand how during Henrietta’s pregnancy no doctor had noticed any abnormalities. The only explanation was that her tumor must have grown extremely fast during the past three months.

One week after her initial visit, Henrietta returned to Johns Hopkins to receive her first treatment. At the time, it was standard procedure to treat cervical cancer with radium, since radium kills any cells it comes into contact with. Although we now know radium to be extremely radioactive, in the 1950s it was hailed by doctors as a cure for everything, even for constipation. In Henrietta’s case, Doctor Lawrence Wharton Jr. sewed three small tubes of radium to the tumor. However, as he was performing this procedure and without Henrietta’s consent, he took a sample of the tumor and sent it to the Johns Hopkins lab.5

George Gey was the head of tissue culture research at Johns Hopkins, and for three decades before receiving the sample of Henrietta’s tumor, the purpose of his lab was to grow cancerous cells outside the body. He wanted to create a line of immortal human cells, that is, a line of cells descended from one original sample that continuously divided. In 1941, researchers at the National Institutes of Health had performed this feat using mouse cells, but no one had been successful with humans cells, since they all eventually died after a certain amount of time. Henrietta’s cells were the exception to this case.6

There was nothing special about the day that Gey received the sample of Henrietta’s tumor. He handed it to one of his assistants, Mary Kubicek, and she divided the sample into several test tubes, labeling each tube as HeLa, short for Henrietta Lacks. She then filled the tubes with culture medium, a solution containing all the nutrients that cells needed to survive, and placed the tubes in a slowly rotating incubator. This slowly rolling incubator was essential to the process because the motion mimicked the natural environment and movement of cells in the human body.7

At first, no growth was visible in the tubes. However, on the fourth day, a small white clump of cells was present, and every day after that, the amount of cells in the test tube doubled. Unlike all other cells, these did not stop dividing in culture. Instead, they doubled every twenty-four hours, and they grew to fill the space given to them. With the cells from Henrietta’s tumor, George Gey succeeded in creating the first human immortal cell line. He was so excited about his triumph that he immediately sent samples to colleagues around the world, and this began the spread of HeLa. 8

While the cells taken from Henrietta and placed in labs were growing at an astronomical rate, so also was the cancer within her. Henrietta had no idea about the breakthrough that her cells had in the lab, but she did know that her cancer was getting worse. Her visits to Johns Hopkins went from once every other week to receiving treatments every day; this shift in frequency took place in March 1951. At Hopkins, she received a combination of radium treatments and X-ray therapy, a procedure that involves aiming radiation from x-rays into the affected area. Both of these methods were meant to kill the cancer cells and shrink the tumors. Nonetheless, she grew weaker and weaker by the day with her body turning a burnt shade of black, and her cancer persisted. For the next few months, new tumors appeared, and Henrietta decide to stay at the hospital one week after turning thirty one. In their notes, doctors recorded that she was in terrible pain, and on October 4, 1951, Henrietta Lacks passed away. She left behind her husband and her five children, who then went to live with a cousin in the same neighborhood just outside the city of Baltimore.9

Although Henrietta Lacks was gone, her cells were now being shipped across the globe to researchers. At the end of 1951, the world was in the middle of the largest polio outbreak in history, and everyone was searching for a vaccine. However, scientists needed a specimen to test the different vaccines on. The answer to their problem was to mass produce HeLa cells. That same year, they created a HeLa factory and distribution center at the Tuskegee Institute. The cells produced in this factory were sent mainly to polio labs. However, others saw the opportunity for profit, and in 1954, a man named Samuel Reader created Microbiological Associates, a for-profit HeLa cell factory. Reader turned the production of HeLa cells into a multibillion dollar industry. Using these cells, researchers had significant accomplishments, including developing treatments for polio, cancer, AIDS, and they were also used to study in vitro fertilization.10

All the while, Henrietta’s family had no idea that her cells lived on in labs around the world, or that they were being bought or sold. It wasn’t until 1973, nearly two decades later, that a researcher requested to draw blood from all of the family members. It was then when they found out about the cells, and everyone, especially her children, were angry. No one in the family, including Henrietta, had given consent for them to take or use her cells, and now they were everywhere. In addition, some individuals were making millions off her cells, but the family didn’t receive any profit. For some time they tried to file law suits, but to no avail. Recently, however, Henrietta’s family have begun to receive a small form of compensation, not in payments, but in partial ownership. In 2013, the Lacks family reached an agreement with the National Institute of Health that the DNA sequence from HeLa cells can only be accessed by researchers who are approved by the Lacks family. Although this is a small contribution, for the Lacks family it is a step in the right direction as they continue to deal with the unclaimed legacy Henrietta Lacks left behind.11