Bloody Mary in the Mirror 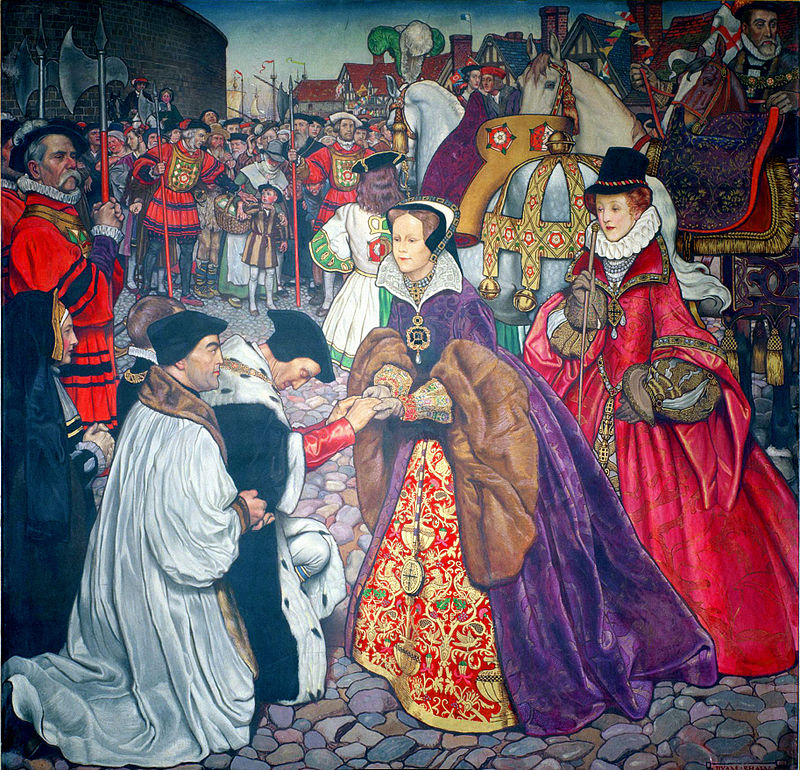 Winner of the Fall 2016 StMU History Media Awards for

No one can say who history will choose to remember, or for what they will be remembered. Sometimes a lifetime of achievement can be forgotten because of a single misdeed. Few historic figures relate to this statement more than the English Queen Mary Tudor. Remembered today as a drink, or as a ghost story told by young children, Queen Mary was the first self-reigning queen of England during a time of radical religious change within her realm. The atrocities she committed during her reign would forever live on, and earn her the nickname Bloody Mary.

Mary Tudor was born in the year 1516 to King Henry VIII and Catherine of Aragon. Although he wanted a son, King Henry was very fond and proud of Mary, whom he showed off to many people in the castle and in the London markets. As he was showing her off to a French envoy, King Henry was heard shouting “By immortal God, Master Ambassador, this girl never cries!”1 Beginning at the tender age of six, Mary was offered up for marriage multiple times, including to her cousin Charles V, the Holy Roman Emperor, and to the son of King Francis I of France, and even to King Francis himself. She was crowned by her father as the first princess of Wales.

Because Catherine had not given him a son, King Henry sought to annul their marriage. However, at the insistence of Catherine, Charles V and papacy refused to grant Henry the annulment. Henry did not take kindly to their refusal and sought to distance himself from their ecclesiastical rule to establish his own.With his new adviser, Thomas Cromwell, a known Protestant, by his side, King Henry announced the Act of Succession, formally separating the England from the authority of Rome. He then enacted the Act of Supremacy, which placed him as the head of the new Church of England.2

Much of northern England discontented with the current state of affairs. Growing ever more restless with rising taxes, hardships, and now the separation from the Roman Catholic Church, many villages began to revolt. Cromwell sought to quell the rebellion by enacting the Pilgrimage of Grace. Many monasteries and places of worship were burned to the ground while the government issued the Ten Articles of Religion, religious rules that had to be practiced, many of which heavily favored Protestant traditions. These actions only led to further uprisings that eventually posed a threat to King Henry’s rule.3

Once again under the guidance of Thomas Cromwell, King Henry executed over two-hundred of the insurgents, effectively ending the uprising. A young Mary watched as her father sentenced his enemies to death, establishing his power and right to reign through force. This display of power would shape Mary and her eventual reign as monarch.4

Mary was very close to her mother growing up, and believed very deeply in the Catholic traditions and values instilled in her at a young age. After Catherine’s annulment, Mary quickly sided with her mother and developed a deep hatred of Henry’s new wife, Anne Boleyn. Angry that Mary chose to side with Catherine instead of him, Henry separated Mary from her mother, stripped her of her title,which she would never regain in her lifetime. After the birth of her new half sister Elizabeth, Mary became illegitimate in the eyes of the royal court and lost all right to the throne. She was forced to live in Elizabeth’s house, where she was hated and reviled by her step mother Anne Boleyn until her execution years later. Scholars believe Mary suffered from congenital syphilis, which she inherited from her father. This, coupled with the psychological stress she endured, caused her to spend the next several years in and out of severe illness.5

On 12 October 1537, Edward VI was born to King Henry and his third wife, Jane Seymour. Now Henry finally had a son who would succeed him upon his death, which happened in 1547. Under Edward’s rule, Protestantism was given Edward’s full sponsorship, and an English Reformation ensued, which brought a thorough-going persecution of all things Catholic. Despite this, Mary continued to practice her faith, holding mass in her private chapel, which was in open defiance of the many religious laws put in place at Edward’s behest. Edward’s rule, however, was short lived; he reigned only six years before dying of illness. Before he died, Edward altered the line of succession to ensure that Lady Jane Gray, a Protestant and grand-daughter of King Henry’s sister, would take the throne instead of his half-sister Mary. Lady Jane became queen, and Mary was forced to flee for her life from the castle. She was faced with a choice: flee the country, or try to oppose her rule.6

To the surprise of many, Mary garnered large support and loyalty from many subjects, including East Anglian nobility. In a matter of days she had amassed an army strong enough to oppose the English council and end the rule of the nine-day queen. At 37 years old, Mary Tudor ascended to the throne. In 1554 Queen Mary issued an order, which declared that queens held equal power to kings, effectively becoming the first regnant queen of England.7 As a monarch Mary worked ceaselessly in the name of her kingdom. It was said that she woke up at dusk to pray, then worked in government well passed midnight. Despite the struggles she had endured throughout life, and the cruelty she later become known for, Mary was described by many as kind and caring woman. She was known for interest in fine jewelry while still insisting she remained a simple woman, with an inclination towards gambling.8

Mary immediately worked towards reestablishing the papacy’s control over England. She began a reverse Reformation, undoing many of the religious laws in place and replacing them with new laws meant to reestablish Catholicism in England. Many disagreed with her efforts, and did not believe she had a right rule. Uprisings began as people defied many of the religious laws she put into place, practicing their faith in secret as Catholics had done only a few years ago. As her father had done before her, Queen Mary established her power and authority by executing all those who defied the new laws. Protestant prisoners were dragged from their cells, tied to stakes, and burned alive for all to see. Often times these prisoners were covered in hot tar to make the flames burn longer. Many of the people executed were young. Mothers were burned alongside their children. An estimated 294 were believed to have died under her rule9.

For Queen Mary, these executions were not just punishing those who broke the religious laws of the land, but a way of purifying England so as to restore it to its former state of communion with Rome. As she had witnessed from her father before her, public executions were also an efficient way to establish power and dominance over the people, great and small. This may have been a necessary power play, since many doubted whether she actually had the strength to rule, because she was a woman. These executions did produce the desire outcome; however, the people sacrificed to the flames soon became martyrs, and Protestant sentiment grew even stronger among its followers. Those who escaped her purge began referring to the queen as “bloody Mary,” because of all of the Protestant blood she had shed.10

Despite the loyalty she had garnered among her followers, many people still believed a queen would be too weak to rule on her own. Many members of her council had also served under Lady Jane as well, providing more obstacles for her to overcome. Mary knew she needed to produce an heir to ensure that Elizabeth would never ascend to the throne. She married King Phillip II of Spain, son of Emperor Charles V, a decision that many considered to be the worst in her reign. Sir Thomas Wyatt, a Protestant leader, staged a rebellion against the matter, led by many other prominent Protestants. Many years into their tumultuous relationship,Phillip convinced Mary to aid Spain in his war against France.  which she did, and it resulted in massive losses for the English navy.11

Like her brother before her, Mary’s reign was short lived, lasting only five years. She died in the year 1558, after finally succumbing to illness.12 Elizabeth was then crowned reigning monarch, devoting her time as queen to rebuilding the Church of England. As her father had done before her, Elizabeth sought to establish a middle ground between the two warring religions. She instilled traditions from both Catholicism and Protestantism to establish peace among the people.

Though a trail blazer in every sense of the word, Queen Mary is instead remembered as the “Tyrant Tudor” reviled by many for the ferocious acts she committed in the name of her faith.13