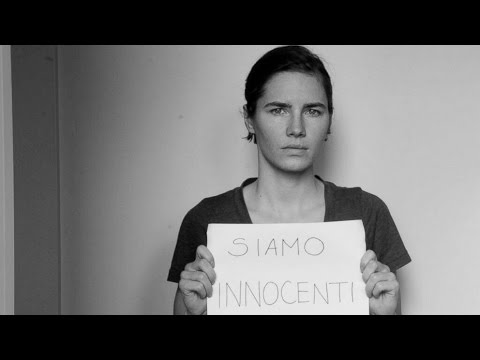 Imagine being a twenty-year-old American college student coming back to your dorm room in Italy after spending the night at your significant other’s house. You’re ready to get back to studying and hanging out with your roommates. However, upon entering your dorm room, you see several suspicious things. The door is open but no one is supposed to be home. You see unflushed feces in the toilet and blood droplets on the floor between you and your roommate’s shared bathroom. You also notice that your roommate’s bedroom door is locked. Worried that someone broke into your dorm, you go back to your significant other’s house and explain everything you had seen to them. Your significant other decides to go back to your dorm with you to check out the area. To your surprise, you notice that the feces in the toilet you had seen earlier had been flushed. Someone had been hiding in your dorm when you had first walked in. Your significant other quickly calls the cops. Your other roommate arrives with her boyfriend, and he kicks in the door only to find your roommate’s dead body laying on the floor, stripped naked from the waist down, and covered in stab wounds. Now, imagine that after being interrogated by Italian police officers, you are arrested on the spot and accused of murdering your roommate. This is exactly what happened to Amanda Knox – an American college student who was judged and wrongfully convicted of murdering her roommate, Meredith Kercher, in an Italian court.

On November 2nd, 2007, the body of Meredith Kercher was discovered in her bedroom by Knox, her boyfriend Raffaele Sollecito, and her fellow roommates. Once the police arrived at the crime scene, they took Knox, Sollecito, the other roommates, and a group of Kercher’s friends to the police station for questioning. Knox was questioned from November 2nd to November 6th. Late in the evening on November 6th, after being bombarded with questions from interrogators, Knox’s memory became frazzled and she was told to sign a paper written in Italian that interrogators claimed was a translation of her account of what happened. Exhausted and wanting a break from all of the questioning, Knox signed the papers without knowing that it was actually a written confession that stated that she was there while the murder occurred and that the killer was her boss, Patrick Lumumba. This seems to be problematic with the language barrier; since Knox wasn’t fluent in Italian, she wasn’t able to completely comprehend what she was signing. The police then arrested Knox and Lumumba, but he was released on November 20th after they had confirmed his alibi. After her interrogation, Knox claimed that the Italian officers refused to provide her food and water for a long period of time, told her that she would never be able to see her family again, and even hit her twice on the head.2 In December of 2007, police officers charged Rudy Guede, a drug dealer, with first-degree murder after finding his bloody fingerprint on a pillow at the crime scene. In 2008, Guede was sentenced to sixteen years in prison; however, this did not stop the Italian court from still thinking that Knox was somehow involved.3

Knox’s very long trial began in January of 2009. During her trial, the Italian court used character evidence – evidence of a person’s character trait to prove that the person acted in accordance with their trait at a certain point in time – against her. They used her Myspace username “Foxy-Knoxy” as evidence to prove that she was narcissistic and addicted to sex. According to the prosecutors, Knox had slit Kercher’s throat in a sex game involving her boyfriend, Raffaele, on the first of November. Since U.S. courts prohibit this type of character evidence, many Americans viewed this as unjust. They also thought it was unfair since Knox was an American citizen and had to face punishment by an Italian court. However, this did not eliminate Italy’s negative perception of her, as the Italian court used the fact that Knox was kissing Raffaele while at the police station as a sign of her selfishness and sexual desires.4 However, Knox claims that she and Raffaele weren’t making out and that his kisses comforted and reassured her that everything was going to be okay during the worst time of her life. Despite her claims of innocence, on December 4th, 2009, Knox was convicted of murder and sentenced to twenty-six years in prison while her boyfriend was sentenced to twenty-five years.5

Knox was stunned that she was found guilty of murdering Kercher. During her trial, she took notes of what the witnesses testified and compiled a long list of false information that was said and gave it to her lawyers in hopes of supporting her innocence. Although she knew that many people thought she was guilty, she thought that there wasn’t enough evidence for her to be convicted of the crime. Knox kept in frequent contact with her lawyers, and whenever the trial was brought up, she remained hopeful that she would be found not guilty. According to Knox, she was naive to believe that she had a chance of being found innocent. Despite all of her attempts to prove that she was innocent, Knox ended up spending 1,427 nights in prison for a crime she did not commit.6

During Knox’s appeal trial in November of 2010, experts reviewed the DNA samples gathered at the crime scene and concluded that there were many errors in the gathering of the DNA. For example, the experts had found that there were no traces of Kercher’s DNA on the alleged murder weapon they had obtained from Raffaele’s kitchen. The experts also found the DNA of multiple males on the bra clasp of Kercher, which had been lost for 47 days. Because the bra clasp had been lost for so long, the experts claimed that the evidence was most likely contaminated and that it shouldn’t be used against either Knox or Raffaele. Although the Italian forensic team did an inaccurate job at gathering and using the evidence in court, the forensic experts were able to disprove their theories of what happened the day of the murder and help Knox and Raffaele become acquitted and released on October 3rd, 2011.7

Just when Knox thought she was finally free and could put all of this behind her, the highest court of Italy demanded a retrial on March 25, 2013, after finding a note that was written by her that confirmed that both she and Rudy Guede were present during the time that Kercher was attacked.8 Knox stayed in the United States and was represented in the Italian court. Once again, on January 30th, 2014, both Knox and Sollecito were found guilty because the court concluded that the murder weapon had been cleaned and rid of Kercher’s DNA. More than a year later, on March 27th, 2015, the Supreme Court of Cassation, the highest court of appeal in Italy, heard the case and concluded that this was a case that lacked a solid foundation. Based on this conclusion, both Knox and Raffaele were acquitted for the murder – this time, for good.9

Although Amanda Knox was released from prison, many people still believe that she was, in fact, the murderer of Meredith Kercher since Raffaele had changed his story after being interrogated by the Italian police. On November 2nd, Raffaele claimed that Knox was with him the night before the body was found. However, on November 5th, the Italian police claimed that he no longer had an alibi for Knox, which suggests that he was trying to cover up for her. In addition, the fact that Knox had pointed the finger at her boss, Patrick Lumumba, for murdering Kercher even though he had an alibi shows that Knox could’ve possibly had something to hide. Despite this, however, Knox has written her own book about the situation and speaks her truth.10 Knox is also the host of her own podcast titled, “The Truth About True Crime with Amanda Knox,” in which she explores and analyzes different stories of vigilante justice. An Emmy-nominated Netflix documentary, Amanda Knox, also sheds light on Knox’s perspective of the situation.11 Now, eight years after being released from prison, Amanda Knox is happily married and continues to voice her opinion about injustices in the courtroom.