Hippocrates: The Father of Modern Medicine 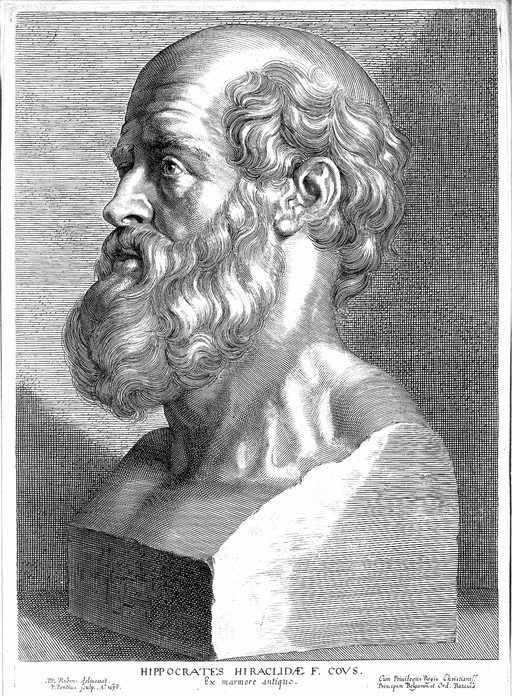 Today, the typical course of action for most professionals in the medical field is to treat ill patients to the best of their ability, but this was not always the case. In ancient Greece, when someone had an illness, people usually assumed that he or she had simply displeased the gods and was being punished accordingly. In this regard, the Greeks believed that the only way to be healed was to make a sacrifice to appease whichever god had been upset, and priests were often required for the process. In Greek mythology, the most popular healer gods and demigods were Chiron, Asclepius, Apollo, Hygeia, Panacea, Iaso, and Akeso. These gods and goddesses were called upon for healing by the Greeks. Chiron was a centaur, the son of a titan and a nymph. He was considered the first teacher of medicine, and was thought to heal through magic and herbs. Apollo was thought to be the god who discovered the art of healing, and, in turn, he was generally considered to be the first doctor. Asclepius was said to be the son of Apollo and a mortal woman, and was a well-known god of medicine. He learned medicine from Chiron and excelled to the point that he was able to heal the dead. Asclepius had four daughters: Hygeia, the goddess of hygiene; Panacea, the goddess of cures; Iaso, the goddess of recovery; and Akeso, the goddess of healing wounds and illnesses. When someone had a disease or became ill, he or she prayed and sacrificed to one of these gods or goddesses and hoped that one of them would heal him or her. This is the way it was done…until Hippocrates changed it all.1

Hippocrates was the son of the physician Heraclides and Phenaretes on the Greek island of Cos. While there, he attended the medical school on the island, one of two medical schools at that time. He was taught medicine his father and Herodicus at the medical school.2 Early in his medical career, he was influenced by the work of Alcmaeon of Croton, who taught that health came from a balance among the powers of the body. Philosophers and scientists before Hippocrates’s time greatly contributed to Hippocratic thought. One of the more notable influences was that of Pythagoras, a man who thought that a human’s place in the universe came from symmetry—hot and cold, wet and dry, sleep and awake—who also believed that health and sickness were part of this fundamental symmetry. Another great influence on Hippocrates was Empedocles, who thought that the body was heated through life processes and cooled through breathing, and, as a result, that health could be achieved through the balance of four fluids of the body: phlegm, blood, yellow bile, and black bile. After learning about the great thinkers before him, Hippocrates ultimately believed that the only way to understand man as a natural being was to study nature. Hippocrates separated physicians from philosophers and religious leaders through this study of nature, basing medicine on scientific reason and defining diseases with physical explanations.3

Hippocrates treated the body as a whole, believing that each part contributed to one’s overall health or illness. He was the first to accurately recognize diseases and describe their symptoms, and he even diagnosed pneumonia and epilepsy in children.4 He taught that the body had a natural ability to heal itself and prescribed treatments like fresh air, rest, and cleanliness for his patients. If none of these worked, he would prescribe diet changes, and if a change in diet had no effect, he would move on to bloodletting, herbal drugs, or even surgery, if necessary. As his popularity grew, he became the first to predict how a patient’s illness would progress based on experience with past patients.5 Hippocrates’s ability to give an accurate prognosis led to a greater amount of trust in physicians, ultimately increasing the demand for medical professionals across the Greek world. His abilities as a physician and healer became well-known throughout Greece, and Hippocrates quickly became something of a medical celebrity. He recorded all of his scientific discoveries and compiled his writing with the writings of others like him in the “Hippocratic Corpus,” so that his discoveries would not be lost to the world.6

The Hippocratic Corpus consists of about seventy works, which are now considered to be the oldest complete medical books in history. The Corpus contains books for physicians, like medical treatises, descriptions of symptoms, pharmacy mixtures, and instructions for preparing and administering medicine. Most medical books would address issues that were unique to ancient history. For example, works like Sacred Diseases and On Ancient Medicine, condemn superstition and philosophy in medicine. Other works were written over practical matters, and contained documentation of experimentation and descriptions of dissections of animals. The Corpus also had works for common people, books that educated the public to discuss medical problems with their physician, and how to determine which doctors could be trusted.7  The main concept of the Hippocratic Corpus was that good health originated from the equilibrium of the body, that illness arises when the body was out of equilibrium.8 Air, Water, Places is the only work of the Corpus that discusses the effect of water on health, and it also attributes health to other factors, like season, wind, quality of water, terrain, and diet. The Corpus seems to place great importance on the quality of water for health, arguing that good water, such as springs, generally causes good health, while bad water, such as stagnant lakes, usually result in bad health.9

One of the most influential works of the Corpus was the “Hippocratic Oath.” The “Hippocratic Oath” had two sections: the rules for how a physician was to conduct himself in both professional and private life, and the physician’s responsibilities to teachers and students.10 The Oath argues that a physician should pay attention to his conversation, behavior, clothing, style of hair, nails, and smell in both professional and private life. It states that, in order to build a patient’s trust, a physician should not present himself as overly superior or overly humble, but should instead work to find a solid middle ground. The physician should ensure that his facial expression, voice, and behavior displays dignity, in order to inspire confidence within the people he works for. Finally, the physician should not be guided to medicine for money, but rather, he should openly pursue medicine out of a love for his fellow man.11 The Oath was an attempt to add ethics to medicine, and those who embraced it were not readily accepted by colleagues. When a physician took the Oath, he was instantly limited in what he could or couldn’t do for a patient, and he was also barred from using treatments that were previously open to him; for example, the Hippocratic Oath prohibited physicians from performing abortions.12 The Hippocratic Oath promoted Hippocrates’s view of a patient-focused approach to medicine and increased trust in physicians.

Thankfully, Hippocrates’s discoveries were ultimately passed on, and they still influence our medicine today. He was not only a well-known physician, but he was also a great teacher. One of his students worked with the Roman physician Galen, thereby introducing Hippocratic thought to the world outside of Greece.13 Galen later wrote in a commentary on ethics in the Hippocratic Corpus that he had always felt that ethics and medicine were connected, and admitted that he was shocked to learn of medicine before Hippocrates, to learn that physicians were commonly prescribing potentially harmful treatments without examining the cost or benefit to the patient’s health. Galen agreed with Hippocrates in condemning doctors who took chances with their patients’ lives by prescribing risky treatments and trusting in chance rather than in established principles. In another commentary, Galen wrote that Hippocrates stressed that the most important element in overcoming a disease was the patient, not the doctor or the disease. He argued that the patient must first have trust in the doctor in order to follow his advice, to ensure that the disease could eventually be overcome. Galen’s commentaries on the Hippocratic Corpus led to the preservation and spread of Hippocratic thought in the ancient world, and allowed it to survive to modern times.14

The influence of Hippocratic thought can be recognized within our medicine today in a variety of ways. Not only is it found in the lack of superstition being used by physicians, but it can also be found in our trust in medical professionals instead of priests when we are ill. But it is also mirrored in physicians themselves while they make medical observations, prognoses, and attempt to cure diseases. Because of Hippocrates, we know that there is a rational, physical explanation as to why we have a disease, and the reason is not because the gods are angry with us. While we know that balance between the fluids of the body is not what causes health or illness, it was nevertheless an important step in the journey. Hippocrates gave us the first library of medical works. He was the first to provide instructions for other physicians on medical treatments. He taught us that the body can heal itself. He was the first to recognize that multiple people with the same symptoms have the same disease. He gave the people a reason to trust physicians, and gave physicians a way to maintain that trust. Because of all this, Hippocrates is called The Father of Modern Medicine.