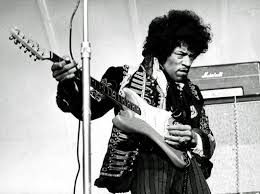 Jimi Hendrix stands before over 200,000 people about to make musical history. It’s 1969, in the middle of the war in Vietnam. The Vietnam War was one of the bloodiest in this nation’s history, people who went to Vietnam often returned in a damaged state, if they returned at all.1 At the time, the presidential approval rating in the war was only around 39 percent, and Jimi Hendrix prepared to demonstrate his opinion of the war with his rendition of the National Anthem.2

Before Hendrix was a famous musician, he was in the military. He was honorably discharged due to an ankle injury. He had signed up for one year, however, while on duty, he couldn’t hold intelligent conversations, fell asleep, and was more focused on his guitar than his work. After he was discharged, he shifted his focus completely to his guitar. Soon after, his music career took off and he released “Hey Joe” with his band The Jimi Hendrix Experience. He quickly rose to fame, and soon after he was headlining his own tours and selling out massive shows. 3

Rain delays caused Hendrix to play on Monday at Woodstock that year. While he was offered an opportunity to perform at midnight, he chose to play the next morning. Even though Hendrix passed on the opportunity to play in front of the massive crowds that were still there at midnight, he still played for dedicated fans. However, he didn’t come for the fans, he came for the experience. Hendrix’s performance was shaped by the the current state of the Vietnam War, which was at its peak when he played. Hendrix’s music was also shaped by his complete unwillingness to conform, he refused to be a part of normal society, and he refused to support the war.4 Over 58,200 American soldiers died in the Vietnam War, and many of the people in the United States didn’t know why the nation was fighting, and many just wanted peace. This political context fueled Hendrix’s passion-filled performance which lasted over two hours, and included an encore. Encores were rare for Hendrix, and so concert-goers were ecstatic.

The performance included a medley of some of his songs, and in the middle of this is when he made musical history. Jimi Hendrix played a solo version of the National Anthem. His rendition included many parts of the song where he misplayed the song on purpose. He dragged out the notes for “the bombs bursting in air,” showing that the Star Spangled Banner talks about America’s history involving many wars. He also misplayed the notes for “home of the brave,” drawing to question why we call the men fighting a war with very little acceptance in our country heroes. Because he was in the military, he knew how the system worked, and he didn’t like it. He also added in parallels and similarities to the song “taps,” to show the amount of death the country had seen, as if to ask “is it worth it”? He purposely dropped the notes and let them come out unclean and muffled. He wanted to display that even something as patriotic as the National Anthem glorified our nation’s destructive ways of solving international issues. He did this by accenting the notes where this was prevalent and bringing attention to them. The audience had mixed reactions however. While many of them saw the passion-filled protest he was trying to portray, some of the fans were appalled by how he played the national anthem. People wrote to media networks saying that what he did was a disgrace. His performance was a polarizing force, he was able to both unite people behind him and the war protests, as well as causing people to speak up against the desecration of our National Anthem.5

Hendrix made music history because he had so many fans, and he was able to actively voice his opinion without using words. Whether you agree with his protests or not, he was very successful at gathering a crowd and influencing their thoughts.6

I have always heard about Jimi Hendrix and his music, but I have never actually looked into him all that much. This was a very interesting and informing article. I never knew that Hendrix used his performance to protest against the Vietnam War. I think it’s amazing how Jimi was able to use his shows as a peaceful protest, it really shows how creative he was. I also never knew that Jimi was in the army. Great article!

This was actually an interesting article. I knew just little about this musician prior to reading this article. I liked how the author described Jimmy Hendrix career, Although, I haven’t heard a single song of this character, by reading this article I can really see the impact his music and performances had in the future generations of musicians.

While reading this article, I continued to see the parallels of the history between Hendrick’s National Anthem and the current history/ state of the United States. Hendrick’s made just small changes to the National Anthem but it caused an uproar. Illustrating how just one little action or word causes a ripple effect. By changing certain parts of the National Anthem, people began to think about the symbol of the U.S and what “we” really represent. Hendrick’s actions exemplified that people will listen if you have something to say, but you must be bold, loud, and proud . Additionally, while reading the article I was in awe of how music was highlighted. The author did a great job of portraying music with the purity and complexities in its true nature. While reading the article the reader gets the impression of how powerful music can be. With or without words there is a story, an emotion, a message.

I never knew too much of Jimi Hendrix personal life as I’ve only heard a few of his popular songs. This article is awesome for really dissecting one of the moments America starred wide opened at Jimi Hendrix performance. Many African American artist have also approved and brought awareness movements from their music such as Black Lives Matter and speak about police brutality. I think its great for artist to bring attention the challenges our generations face.

Jimi Hendrix is one of the greatest guitarists in all of rock & roll history. As a guitarist myself, I have an enormous amount of respect for Jimi. For one he was left handed and had to play the guitar backwards, which is extremely difficult in itself. He always played with such vibrato and passion in his music. Every time you saw him on stage he had a smile on his face. Jimi was born poor and black in a time when racism was rampant; but he didn’t blame anyone. He didn’t complain. He just became the best. Great article on an amazing man and guitar legend. Gone way too soon. I bet if Jimi was still alive he may be touring today.

This was such an interesting article. Before reading it, I did not know much about Jimi Hendrix but not much. I knew a little about Woodstock and find it fascinating how many musicians came together to protest the war through music. Jimi Hendrix is such an inspiration and his methods of protesting will live on forever.

This was a very well done article, Nathan. i did not know much about this famous musician, and why he was famous, but your article helped me open my eyes. He did a rather bold thing playing the national anthem the way that he did, and you told the story of that day rather well. I love your word choice, and the way you told the story was commendable. If I had to say anything, I just wish it was longer. You did an amazing job with this article.

I like how you open the article by setting the scene of Hendrix’s performance and establishing important context for the story you’re about to tell. It’s fascinating how the Vietnam War shaped his performance and the message he wanted to share as a musician and a veteran. His rendition of the National Anthem was controversial but also brave as he used his talents to make a statement. Your article was such a fascinating read, and I think you articulated Hendrix’s performance in 1969 well! Great job!

As someone who listens to his music but knows not much about him, I was very intrigued while reading this article. I had no idea he served in the war but was too focused on music. However, I admired the fact that he voiced his opinion through music; that really shows music is his true passion. I loved that you included the way he misplays the national anthem and the little things he does to send out a message.

The early life tragedy Jimi faced in military maybe was the worst one but still it turned him to become musician. It can be considered as a life changing event for him. From his songs how he expressed everything was out from the ordinary. He was more courageous and very few people protested through music, specifically that National Anthem. So, Jimi Hendrix was very absolute in his work. Great article!!!