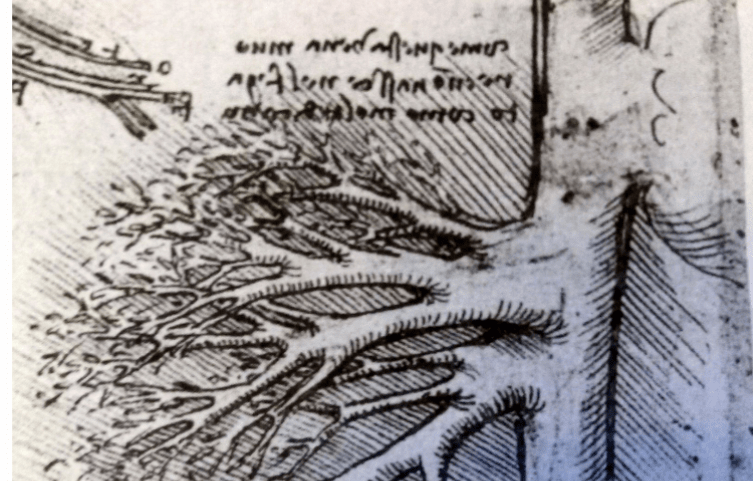 In the year 1300, Pope Boniface VIII issued a papal decree, De Sepulturis, which outlawed various methods of lightening the bodies of the diseased for the ease of transport. These methods–common among the Crusaders in the Near East–included the removal of flesh by boiling as well as dismemberment, which also allowed for bodies to be stored in more compact containers. For years after, De Sepulturis was misinterpreted to include the condemnation of anatomical dissection, and for years the study of anatomy would suffer from this misconception. Over time, however, anatomical dissections regained popularity and became important not only to scientists of the body, but also to artists like Michelangelo and Leonardo Da Vinci. However, even into the 1500’s, anatomical sketches were considered distractions unworthy of publication in anatomy textbooks.1

Nevertheless, despite the intellectual schism between the illustrator and the anatomist, the two classes were often found in the same place: the apothecary. Artists, who frequented apothecaries to purchase pigments, were also in the midst of the influential popularization of artistic realism. For this reason, artists frequently used their relationships with apothecaries to attend dissections, which helped artists deepen their understandings of the superficial structures of the human body and therefore make more lifelike illustrations and sculptures. That being said, most artists never ventured into a dissection to obtain a deeper understanding of the human body’s functions. Their concerns were simply for appearance, and perhaps that was the reason many of their illustrations were not suitable as visual aides within textbooks.3

Leonardo Da Vinci, the famous Italian polymath most commonly known today for his painting Mona Lisa, was not renowned for his anatomical diagrams in his time; but unlike his artist peers, his illustrations of the human structure went far beyond the superficial arteries and musculature. While his diagrams do not indicate formal training or even first-hand experience at dissection, Da Vinci began sketching the human anatomy at four different perspectives, simulating a three-dimensional model. Furthermore, Da Vinci sketched the bodily organs, and even wrote about their anatomical functions. It seems that it was Da Vinci’s unquenchable thirst for knowledge and inquiry that drove him to observe deeper than what most deemed necessary. This was characteristic of Leonardo from a young age. Indeed, in 1478, when Leonardo began his career in Florence under the Compagnia de San Luca, he was just sixteen. His early loves for mathematics and mechanics were maintained throughout his life and consistently influenced his vision of the world.4;

Vision was a key aspect to human knowledge to Da Vinci. Being a man of many talents and interests, Da Vinci was drawn to many occupations, and in 1478, after recommending himself to the Duke of Milan, he was made a royal appointee to the duke, Lodovico Sforza, as chief military engineer. In his letter of self-recommendation, Da Vinci referred to himself not only as an artist, but also as a mathematician, architect, and engineer. One of Da Vinci’s first tasks in Milan was to supervise the construction of the Cathedral at Pavia, which would become one of the largest cathedrals in the world. However, it is reported that Da Vinci became so immersed in the theoretical aspects of the physical laws and mechanics involved in the construction of the cathedral that his subordinate had to assume leadership on the practical matters of construction. During this time, Da Vinci also began a practice that has allowed historians and enthusiasts to obtain much deeper insight into the course of Da Vinci’s intellectual studies; like many intellectuals of the Renaissance, Da Vinci began cataloging and recording his studies in notebooks. Many of the anatomical sketches that still survive today were contained in such notebooks. Regardless of his official position as chief military engineer, however, Da Vinci’s primary modes of creation were artistic. Indeed, it was in Milan that Da Vinci finished the paintings Madonna of the Rocks, and The Last Supper; both are masterpieces of human expression and artistic style and technique.5

In 1500, Da Vinci left Milan and continued to paint. He spent several years as a vagabond and finished few paintings during these years, although the famous Mona Lisa was among those left unfinished around the year 1503. At the age of sixty-three, he was appointed to the company of the king of France, near Ambroise, where his chief duty was to keep good company to the king. Leonardo spent the last ten years of his life continuing his research in the realm of the physical sciences, and died on May 2, 1519.6