1968: A New Generation of Chicano Fighters 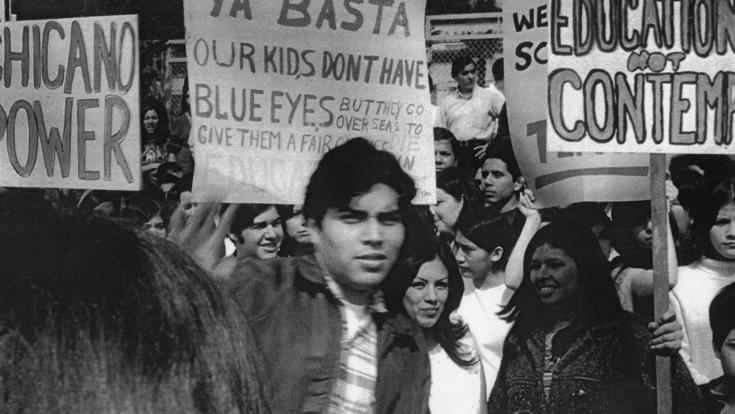 Sal stood strong and tall as he observed his Lincoln High School Chicano students with their indignant fists in the air, yelling at the top of their lungs demanding they be treated equally by the education system. At Roosevelt High School, protesters watched as some of the more aggressive activists ran as fast as they could from the riot police force sent by the city of Los Angeles. Other students were arrested with smirks on their faces, a flush of satisfaction filling their complexions because they knew that what they were standing up for was right. And right they were. Tears rolled down Sal Castro’s face as he witnessed the blowout he had helped spark: “It was a very emotional time for me. Damn, it was beautiful.” This was the essential push Mexican-American and other Latino students needed in order to make a change.1

Latino students attended old school buildings with creaking ceilings, weathered-down stairs, hand-me-down textbooks in limited quantities. They lacked space for a cafeteria and their classrooms were too small, among other things. Latino students were often taught in Spanish and used less English, which hindered their learning. These same schools dedicated most of their curriculum to teaching vocational studies. As a male student, one learned things like carpentry and plumbing; as a female,  one learned the art of the homemaker. Whatever the case, you worked with your young hands from the age of ten, at school.2

In other schools in Los Angeles Unified School District, Anglo, Asian, and even some African-American students attended larger and more aesthetically-pleasing school buildings with distinct classrooms and gently used books. In those schools, students were taught only in English, which nurtured their vocabulary. You had the advantage of playing on a big playground, and your cafeteria had tables for everyone to eat on. You learned the four distinct subjects of Mathematics, History, Science and English. Most importantly, there was an expectation for you to graduate on time and go on to gain a higher education.3

Based on his experiences growing up in segregated schools with little encouragement, he chose to become a public high school teacher because he wanted to make a difference in Latino students’ lives. Initially, these steps came small and happened slowly, but overtime Sal hoped to achieve academic equality for his students. This began in 1963, when he landed his first job at Belmont High School, in downtown Los Angeles. Belmont was an integrated school; however, there was a problem. Despite the Latino student population, they were not encouraged to join the student council that was dominated by white students. After attempting to organize Latino students to advocate for their right to participate in the student council and unknowingly allowing them to break Belmont’s no-Spanish rule, Sal was deemed a troublemaker by the administration. They tended to discourage Latino students from aiming too high because, as Belmont’s principal put it, they possessed a “charming passivity.”5 Sal was defying this practice. They arranged for his transfer to Lincoln High School in East Los Angeles that same school year. However, it was at Lincoln High, a predominantly Latino school, where Castro’s goal of reaching a sense of academic equality for Chicano students would be put to the test. Little did he know that through Lincoln and its students, he would make history.

The year is 1968 and by this time, Chicano students are growing tired. Tired of the discrimination taking place in the classrooms, tired of the continued segregation in their schools, and tired of being seen as second-class citizens in the education system. Not only were Mexican-Americans being treated this way in society, but the prejudice was so fundamental that it affected their learning. In their schools, students were admired by white administrations for being charmingly passive. By this, they meant that Mexican-Americans conformed to all the limitations put on them. These students were rarely pushed to do better academically, and they were often discouraged by their teachers from even considering going to college. When Paula Crisostomo was thinking about going to college, she was explicitly told by a white teacher to give up that hope because she would most likely end up pregnant and drop out like the rest of her peers. Crisostomo’s experience as a Latina student at Lincoln was not unique. Teachers often stressed that the students go into handy professions, and become plumbers or seamstresses. The education system made these particular students feel like second class citizens by destroying their hopes and lowering their self-esteem, which in turn affected their futures as American citizens.6

Prior to the East L.A. Blowouts, the Chicano movement had just begun. The movement was never one solid and united group. The Chicano movement was a culmination of protests and movements within itself that used cultural nationalism to fight for Mexican-American rights. It is not surprising that eventually students would join the fight. In 1966, a high school student in Los Angeles, David Sanchez, founded the Brown Berets, which was a paramilitary group with a similar purpose to that of the Black Panthers. They symbolized a militant force willing to defend the Chicano youth in the war against the educational system that discriminated against them. Another prominent student group that formed at this time was the Movimiento Estudiantil Chicano de Aztlan, or MEChA. This conference opened chapters in high school and college campuses at a national level. They stood for a “Mexican-American Anti-Vietnam War effort and pressed for a Chicano political party to lead electoral efforts.”7

When it came down to making a change, Sal was stuck. It was evident that the fight for Chicano student rights would be a difficult one, due to the long-standing obstacles and traditions of the school district. After all, how could change happen if, despite the 1954 ruling of the complete desegregation of Mexican-Americans and other Latino students, segregation still existed in fact in integrated schools.8 This was showcased through the lack of preparation provided by East L.A. schools to its Mexican-American students. Nonetheless, Sal aspired to be different and meet his students’ needs. During his time at Lincoln High, Sal worked with students and realized that there were “low expectations by teachers, a stress on vocational rather than on an academic curriculum, high drop-out rates, low reading scores, insensitive teachers and counselors, overcrowded classrooms, and a lack of ethnic and cultural reinforcements.”9 These conditions were all due to the internalized racism from decades prior to the blowouts. It led Sal to have an important conversation with his father. He realized that the only way progress so far was being made in the Chicano Movement was through passionate forms of mass protest, as seen with Cesar Chavez and the farmworkers’ strikes. He began to inform his Latino students about his plan to organize a mass walkout in protest of the inadequate education system that set Mexican-Americans up for failure. Soon enough, not only was Lincoln High School organizing for the walkout, but so were other East L.A. schools.

On March 6, 1968, Sal Castro led the Lincoln High walkout, as another seven East L.A. high schools joined the march for their rights to an equal education. The East L.A. blowouts lasted a week, occurring one after the other. The schools included Garfield, Roosevelt, Wilson, and Belmont High Schools. Along with the protests came demands from Mexican-American students that included reasonable requests such as: “Smaller classes. New libraries. More bilingual counselors, teachers, and principals. Improved testing to distinguish between a lack of English proficiency and lack of intelligence. More lessons on Mexican-American culture, art, and history. And no corporal punishment.”10 According to Diego Vigil, the “retention of Mexican identity and bilingual skills has a positive impact on the education of Mexican American youths.”11 It was important for students to be able to keep their culture because it helped build their confidence and to an extent made them feel more accepted; they could be themselves.

When they walked out of their classrooms and created a demonstration on the streets of their campuses, the Chicano students were determined to gain a change for the improvement of their education, and ultimately, their futures. The blowouts paid off. As Rosalio Munoz, a University of California Los Angeles (UCLA) student at the time, recalls:

“The blowouts shocked universities such as UCLA into recognizing how few Chicanos attended college in the L.A. area. Pressured by the blowouts to respond, UCLA, as well as the other schools, began to implement stronger affirmative-action programs to recruit Chicano and black students. In one year the Chicano enrollment went from a couple of hundred to more than two thousand!”12

This alone met one of the student activists’ demands: access to higher education.

During a school board meeting, the board members “agreed outright to two of the demands—more bilingual personnel and smaller classes.” However, they used “lack of funding” as an excuse to not meet the rest of the reasonable demands put forward by the Chicano students.13 Overall, these passionate students fought for general Latina/o student rights including:

“The right to bilingual educational programs, increased efforts for the integration of Latina/o students, equal distribution of educational funding sources, and the constant struggle against alienating schooling practices such as tracking, standardized testing, the mainstream curriculum, and access to higher education have also been important issues.”14

In later years, the fight for Chicano student rights would cause Central American students to demand “a widening of the concept of Chicano Studies and the creation of courses on Latino(as) in United States and Central American history.”15 Furthermore, in 1993 more students became active in “politics that both challenged and overcame traditional Chicano campus politics.”16 Students rejected the idea of Chicano studies remaining institutionalized because it took away the political drive. This took away from the movement because Latino students still did not have complete academic equality. The cause was still present and moving, not simply a part of history.

The young Chicano students across Los Angeles that participated in the blowouts in March of 1968 were brave soldiers that protested for more than their education, but their natural-born rights as Americans while being treated as second-class citizens.

As David Sanchez said, “With better education, the Chicano community could control its own destiny.”17 And they proved to do just that.

As Latino-Americans, a decent education is something that is often taken for granted. We forget that fifty years ago, schooling for Mexican-American and Latino students was in a very different place. Although progress has been made, it is important to keep pushing for educational reform so that every student has access to proper schooling, no matter their socioeconomic status, religion, or ethnic background.