A Calling for Rebellion: Daniel Shays 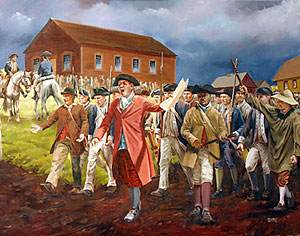 The Articles of Confederation were created by the United States in an act to form a written constitution in 1777.  Ratified in 1781, the Articles seemed a little too centralized and overpowering for the States.1 In addition to the Articles, the United States had just ended the Revolutionary War in 1783. Between 1783 and 1786, a number of events took place that led to one of the United States’ most influential rebellions in its history.

After the Revolutionary War ended, it was a very stressful time for the states. These stresses stemmed from a lack of money, resources, and effective government.  Each state saw that the government under the Articles of Confederation was not working well in many ways. Many states found themselves with little money, while some saw a corrupt government. In Massachusetts, citizens saw three distinct factors that led to the famous Shays’ Rebellion: a weak national government, a problem involving currency, and the poverty of the citizens of Massachusetts in the aftermath of the war.2 These three factors sum up the problems each state was having. These factors contributed to the aggressiveness of many in Massachusetts. These factors caused the states to become more divided, and it led them to become more independent rather than more united.3 This led to an absence of many states’ involvement in the national Congress, their ability to enforce laws decreased, and most refused to pay for their own delegates’ fees for their participation in Congress when in session.4

When the Articles of Confederation were created, an alliance among the thirteen independent states was established to officially declare the formation of the United States.5 Congress’s power over the States was always limited and weak under those Articles. However, Congress could declare war; but the states simply began not allowing enlistments, limiting Congress’s ability to build an army. Provisions such as these in the Articles of Confederation severely weakened Congress and caused the states to quickly become distant. Some states used different currencies than others, which made it very hard for trade and commerce.6 This difference in currency between States led to many problems in Massachusetts.

As time went on, the calling for rebellion soon reached Massachusetts. One man, Daniel Shays, took it upon himself to speak out against the wrongs of the government, thus initiating the beginning of the rebellion. Daniel Shays was a gold-handed sword award holder for his being Captain in the Revolutionary War. His involvement in the war and in politics created a base from which he could speak out.7 Soon more people joined the revolt and a clear reasoning for the rebellion was laid out. Specific members took it upon themselves to make their views known by speaking out about the problems of the Articles of Confederation and National Government.  Resulting in the rebellion beginning in 1786 near the Massachusetts area.

Massachusetts saw state poverty at its lowest, where some farmers even lost their farms due to bad harvests. This brought up the thought of change. The rebellion brought out the debt of the states and the impact of war. The war sent the states into more debt with the cost of war and state governments, and this sent a huge wave of calling for the re-shaping of the Articles of Confederation.8 From this, the rebels soon closed the courts from collection of taxes, and began to shut out commerce from the states.9 This set off a series of debates and reform at the national level. In due time, the reforming would change the future of the United States.10 Its impact on American policy and government still has effects today.

I’ve heard about Daniel Shays before but I don’t remember much. However, after reading this article I found it interesting to read about who he was and what he did: why he is famous. It’s inspiring to read about how he initiated the rebellion and spoke out against the wrongs of the government. Overall, I loved reading this article, it was super interesting and filled with so much details to learn about.

This article is so interesting and provides such a great insight in shays rebellion, a key aspect of American History. This is an example of when people were actually able to band together and protest in a way that caused a major change in our country that benefited the majority of people. This rebellion called for a new foundation of government, and changed the way the American people would live for generations to come.

Nice article. Shay’s rebellion was a very important event in the history of our then fledgling nation. It helped establish in the minds of the people that they had to fix the weak federal government in order to create a more stable country. The articles of confederation just did not work, they very nearly brought a collapse of the young republic. It helped establish the federal authority because Washington intervened on behalf of the government with an army, and put the rebellion down. Still though Daniel Shay’s was a hero, and he was only sticking up for himself and his countrymen

Very interesting article, I had heard about this rebellion before and was nice to read more about it. I found it interesting how the central government at the time was very weak and unable to enforce laws. Those problems definitely needed to be fixed to bring individual states into a nation. It is interesting how ever since the Articles of Confederation were replaced, the government has been becoming more centralized.

This article was great. The author elaborates on the article in a way that makes the audience want to continue reading. I have heard of Daniel Shays, however never really read up on. I found it fascinating how one person from Massachusetts had the courage to speak against the wrongdoings of the government. I also found it fascinating how the author was able to tie everything up in the end and state that the impacts of this are still in effect today. Great article.

This article was interesting due to the history behind Shay’s rebellion. I have heard it mentioned in many classes that I have had before. I was curious about what made people listen to Shays. It makes sense that he had had prior war experience and that he was able to capitalize on the unfortunate circumstances going on at the time. This event ended up being helpful to the United States as it ended up in the government being centralized.

I am surprised that the author did use a story arch with the abundance of sources he had on hand. It can easily be made into a story where the protagonist, Daniel Shay, is ultimately unsuccessful in his attempt to incite a rebellion but does succeed in changing the course of U.S. history forever. All the same, the author cites good reasons why the rebellion was started as well as depicting where it all began. To be frank, I was somewhat disappointed in seeing the article stop so soon.

I have heard of Shays Rebellion and this article does a great job of showing the history behind this rebellion. I think that what Shay did was very courageous for doing what he did and stand up to the government and calling them out on the things that they are doing wrong. The author does a great job of writing this article and I like how he explained what happened after Shays Rebellion.

Shays’ Rebellion is a memorable moment in American history. The Articles of Confederation seemed promising at first yet proved to be ineffective for all the states. It’s attention-grabbing to know that Daniel Shay as a Captain during the Revolutionary War was willing to come forward and the revolt of the injustices that he felt the Articles and national government was committing. The reforms that came with this rebellion are essential to American policy. Great article!