“Ab Sofort”: The Fall of the Berlin Wall 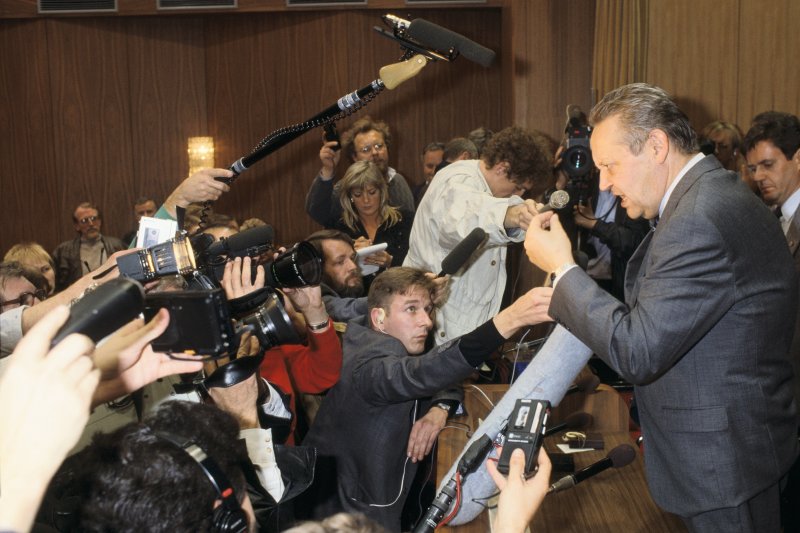 The evening of November 9, 1989 quickly became a historical one as Günter Schabowski, an official of the Socialist Unity Party of East Germany, announced in a press conference that the inhabitants of East Germany could now travel to the West German side of the Berlin Wall after acquiring a simple travel visa. The announcement had a life-changing effect on the two German societies, West Germany and East Germany. There are also other factors that contributed and led to the fall of the Berlin Wall. But before we examine that remarkable night, let’s travel back to May of the same year, 1989.

The story really begins earlier that year, outside East Germany, at the border between Hungary and Austria. On May 2, the Hungarian government began to tear down the barbed wire fence that separated communist Hungary from the NATO-member country of Austria, which became an emotional gesture, as it allowed inhabitants of East Germany a route to West Germany that had been denied to them since 1949. East Germans often went on vacation to Hungary each summer, but in this particular summer of August 1989, as they traveled on vacation to Hungary, they kept going, through Hungary to Austria without any problems. And once in Austria, it was a simple matter of continuing on to West Germany. This event should be consider the first brick falling from the Berlin Wall.1

Then, on June 18, another major event took place outside of East Germany. Poland held elections for the Sejm, the lower house of the Polish Parliament, and for the Senate. For the first time in Poland’s history under the communist system, the non-communist political opposition group Solidarity was allowed to take part in the election process; the Polish Communist Party, in power for decades, felt the pain of a massive defeat. On that night,  Solidarity won 92 of the 100 seats in the senate.2

These external events were noticed by East German citizens. East Germans themselves began to take action. Many strikes were held, one after the other, against the East Germany government. Revolts such as Neues Forum (New Forum), Demokratischer Aufbruch (Democratic Awakening), and Demokratie Jetzt (Democracy Now) incentivized East Germans to get prepared for an upcoming massive movement that started up in a church at Leipzig, East Germany.3

It all started in the summer of 1989, when East German citizens began attending Monday evening meetings at Leipzig’s Nikolaikirche, one of the major churches of central Leipzig, where they prayed and talked about politics. At the beginning, the movement was confused and politically naïve. But as the meetings grew larger and larger throughout the summer and into the fall, the sessions eventually turned into a major movement in the center of Leipzig. It turned into a wave of  massive demonstrations that spread out through East German cities and helped Leipzig gain political strength and power for the upcoming main event. The meetings reached a high point on October 9, which has subsequently become a special day in German history. People flooded the streets of Leipzig with banners and chanted “Wir sind das Volk,” or We are the People.4

The strikes, combined with the events in Leipzig, finally led to the resignation of Erich Honecker, leader of GDR Germany, on October 18, 1989. He was replaced by Egon Krenz, who would be the last Communist leader of East Germany. The resignation of Erich Honecker motivated a yearning of the East German community to search for some new, desired future.5

By November, the huge demonstrations of Leipzig had spread to many other cities in East Germany, particularly to East Berlin. On November 4, East Germans escalated their protest throughout the country, demanding free elections, like Poland had just done. The crowd’s banners explained the needs of society with messages such as “40 years are enough” and “No lies–new people.”6 Up to this point, the idea of the wall falling was unimaginable; East Germans simply wanted to reform their government. They particularly wanted the ease and freedom to travel to West Germany without having to make the circuitous route through Hungary and Austria.

Then, on November 9, 1989, a press conference broadcast on live television in East Berlin changed the lives of East Germans forever. At 6:50 p.m.,  Günther Schabowski, spokesman for the East Berlin Communist Party, announced revised travel rules, which allowed East German inhabitants to leave the country with the use of a Visa.7 A journalist followed up Schabowski’s answer with the question, “When does it take effect?” Schabowski looked up and asked with confusion, “What?” Concerned and bewildered, the audience started to ask questions among themselves, which caused an uproar. After receiving such an important announcement, the crowd became worried that the travel rules would not be implemented in a timely manner, that this was just another government trick or delaying tactic. Günther Schabowski scratched his head, relocated his glasses, and casually replied in German, “Ab sofort.” In other words, immediately. No two words could have been more electrifying to those who heard them. Their implications were unfathomable, as East Berliners by the thousands began to process those words.8

Many East Berliners (and the world) at the beginning could not believe what they had just heard. News outlets and television stations began sending the breaking news that people could now freely pass through to West Germany by the border crossings in East Berlin. They no longer had to go “on vacation” to Hungary, through Austria, to get to West Germany. They could just go through the checkpoints between East Berlin and West Berlin.9 Even though the announcement was not supposed to initiate new traveling rules until the next day, Schabowski had been unaware of this. This supposed press conference became the trigger for a huge crowd to move towards those checkpoints at the wall. Thus, the phrase “Ab Sofort” was the unexpected catalyst of the East Germans’ liberation. As East Berliners moved towards the wall, they could see guards allowing the crowd into West Berlin. By 11:30 p.m., the wall was overflowing with people from both sides.10

As East Germans passed through the wall, they walked down the memorable street Kurfurstendam, or as West Berliners called it Ku’damm. As they walked down this street, lined with luxury stores of all kinds, they were simply amazed by the beauty and opulence of West Berlin. And, these East Germans could not believe that they were finally reuniting with their countrymen and kin. Kurfurstendam became a memorable place as East and West Germans walked down this stunning street together. The tears and joy could easily be seen through both the East and West Germans’ faces on that night. The scene then moved to the Berlin Wall itself, where East Berliners and West Berliners began climbing that symbolic wall of oppression. They danced on that wall that night, East and West. And they began taking hammers to that wall. That night began the end of the Berlin Wall. The chants of the East Germans’ “Wir sind das Volk” became “Wir sind ein Volk” for the first time that night.11

The events leading up to the fall of the wall were caused by both deliberate and unwitting actions. East German citizens had deliberately and determinedly protested their communist leadership, leading to the day when Schabowski accidentally guaranteed the overnight destruction of the wall. That night, Germans began a massive celebration with euphoric and victorious feelings. The news spread quickly to countries all over the world; these nations could not believe the wall was coming down either, and they held celebrations, which continued well beyond the sunrise of November 10. The joy the German people shared after such a long period of time, since 1961, continued throughout the night; the atmosphere was indescribable. Subsequently, the simple phrase “Ab Sofort” became an unforgettable and everlasting part of German history.