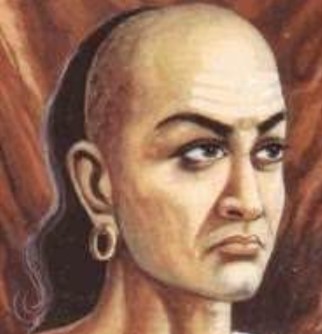 Nearly 300 years before the birth of Christ, Alexander the Great and his war machine had savaged everything east of Greece. After defeating the Persian Empire, the young warlord finally swept into India in 326 BCE. Unlike the previous lands conquered by Alexander, India was unable to mount a serious defense of its borders. Before Alexander’s army even arrived, the country was fractured into several different territories.1 The strongest of these territories still paled in comparison to the Greek hordes. Known as the Nanda, the rulers of Northern India squabbled with each other constantly and were perceived by their subjects as both cruel and incompetent.2 While Alexander the Great quickly abandoned India, intending to take his armies home, he left Greek governors in charge of the country’s northwest border region, an easy task since the Indian rulers were too busy fighting each other to fight the Greeks.3

Around the same time as Alexander the Great’s invasion, an administrator in the Nanda government named Kautilya became agitated by his King’s inability to confront the Greeks. While Alexander had not yet attacked the Nanda King’s territory, Kautilya was from Taxila, a city that Alexander had seized, and Kautilya took the Nanda King’s incompetence personally.4 Versed in both political science and economics, Kautilya was well-educated.5 However, in addition to being brilliant, Kautilya was also outspoken, and, at one meeting with the Nanda King, his blunt speech insulted the Ruler.6 The King then mocked Kautilya’s appearance and threw him from the city.7 Outcast, Kautilya swore revenge against his former leader.8

Despite conflict plaguing India, the Indian caste system dictated that only those who belonged to the warrior caste, known as Kshatriya, could lead others into battle.9 Kautilya was born into the Brahmin, or priestly, caste, and he would, therefore, be unable to assemble an Army, let alone lead it against the Nanda King. Fortunately, the Nanda’s internal squabbling had left some relatives of the royal family in exile. Believed by many to be one of these exiled royals was a boy named Chandragupta.10 Kautilya stumbled across the boy by accident while traveling away from the Nanda Kingdom. He saw a group of children playing, and noticed that the boy easily took charge of the others; Kautilya believed he was a natural leader and took the boy with him to Taxila. While Kautilya could not lead an army or rule a nation, Chandragupta, a member of the Kshatriya caste and relative of the Nanda King, certainly could. In the hometown of his new mentor, Chandragupta studied science and military strategy; simultaneously, Kautilya plotted revenge.11

Although he now had an apprentice capable of seizing power, Kautilya did not have an army, and raising one capable of taking on the Nanda King and ousting the Greeks would be nearly impossible for someone with limited resources. Kautilya and Chandragupta would have to begin the fighting on their own. Kautilya would later write in his political treatise, the Arthashastra, about how to defeat a more powerful enemy. The weaker aggressor, Kautilya believed, should not attack his enemy head-on, but should use spies and rapid small-scale attacks to provoke the stronger enemy into blundering away his advantage.12 As soon as Alexander the Great died in 323 BCE, Kautilya knew the Greek Governors would be struggling against each other for power, the same way the Indian rulers had been when the Greeks attacked years before.13 Kautilya and Chandragupta seized the moment, assassinating two Greek governors.14 This act showed Indians, regardless of what territory they lived in or which ruler they fell under, that it was possible to push back the Greeks; furthermore, Kautilya and Chandragupta proved they were to be taken seriously. The two men were now able to attract followers and begin building an army.

With the killing of two Greek leaders under their belts, Kautilya and his apprentice doubled down. Over the next two years, they seized the Punjab and Sindh regions—now the southeastern part of Pakistan—from the Greek occupiers.15 Kautilya’s birthplace of Taxila was no longer under Greek threat, and the men turned their attention to the Nanda King. Perhaps their successes had caused Chandragupta and his mentor to grow arrogant. They abandoned the methods that had worked so well against the Greeks, and struck into the Eastern part of India facing the Nanda king directly, only to be defeated.16

Ashamed, Kautilya and Chandragupta spent the following months traveling and searching for a strategy that would allow them to defeat the Nanda King, who remained safely tucked away in his capital, Pataliputra.17 One legend says that during their travels, Kautilya saw a young boy burn himself while eating food. He had started eating from the center of his portion rather than the edges where the food was cooler.18 Kautilya saw this moment as a sign. He too had been burned by attacking the center of the Nanda King’s territory, rather than stamping out the less-defended edges. Kautilya presented Chandragupta with a new plan of attack.

Renewing their campaign, Kautilya and Chandragupta spent over a year engaging in what would now be called guerrilla warfare. They attacked poorly defended garrisons and then withdrew before the Nanda could counter-attack. Kautilya set fire to crops, destroying the Nanda King’s ability to feed his subjects or trade with other rulers.19 Since the Nanda King was already disliked by his subjects long before fighting Kautilya and Chandragupta, his inability to provide for them only made matters worse. Furthermore, Kautilya used a network of spies to spread rumors about the Nanda King, destroying his credibility.20 Today, such methods would be called psychological warfare. Eventually, Kautilya’s tactics led to uprisings against the Nanda King.

With Kautilya’s enemy facing both unrest and a dwindling supply of resources, he was weak enough to be defeated. Kautilya and Chandragupta struck the Nanda capital, Pataliputra, with a vengeance. The Nanda King was killed in the fighting, and Chandragupta’s men seized the palace with ease; they thought the war was over. But just as Kautilya had developed new tactics, his enemies had grown and adapted as well. In the basement of the palace, some surviving Nanda soldiers assembled silently in the dark, preparing to spring out and kill Chandragupta when the opportunity arose. On the level above them, Kautilya was walking through the palace when he noticed an ant carrying a grain of rice. He followed the ant until it slipped through a crack, and when Kautilya stooped to look through the crack, he caught a glimpse of the soldiers below. Quietly, he ordered everyone else out of the palace, barred the doors, and set the building on fire, finally erasing the last remnants of the Nanda government.21

Chandragupta retained Pataliputra as his capital and Kautilya as his chief advisor. Over the next decade, they unified the different Indian factions into a cohesive empire. From there, they extended their empire’s borders, defeating one of Alexander the Great’s former generals, Seleucus, in the region now known as Afghanistan.22 Acknowledging that the Nanda Kingdom had fallen partly due to its own incompetence, Kautilya set about establishing a system of government that would be ruthless, but also fair and effective. In his book the Arthashastra, Kautilya codified taxes, explained how to address disasters, and even how to deal with corrupt officials that might harm the people.23 Ultimately, the government Kautilya created and Chandragupta ruled was so successful, it endured for over a century, continuing under Chandragupta’s son and grandson.24