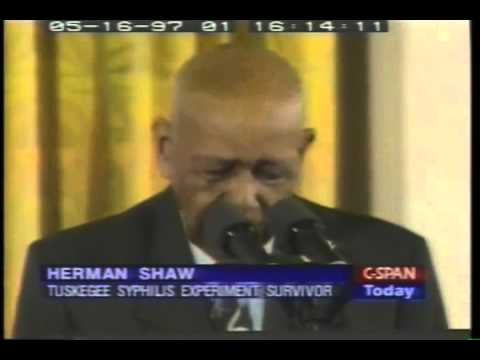 In 1932, the United States Public Health Service (PHS) approved an unethically-conducted syphilis study that involved six hundred poor African-American men at Alabama’s Tuskegee Institute. Many controversial research programs and human trials have been part of the medical field’s history, and scientists with shady ethics have done much harm in the name of science. The government-sponsored Tuskegee Syphilis Experiments, which was able to run for forty very long years, is one of the saddest chapters of that history.

In Macon County, Alabama, there was a very high infection rate of syphilis and very low treatment rates. The Rosenwald Fund, which sought to improve race relations in Macon County, and the United States Public Health Service, joined to address this issue. However, the Great Depression limited the necessary government funding, and the Rosenwald Fund end its support. Nonetheless, the syphilis concern had opened up a pathway for the United States PHS to launch an experiment.1

The United States PHS had initially intended for the study to last for about seven months, and saw no harm since it was designed as an observational study. They would study the effects from untreated syphilis that had already occurred in a population that was already suffering from high rates of untreated and undiagnosed syphilis. The supposed intention was to draw attention to a neglected public health and medical problem in society. However, the men were misled into the study with the promise of free health care, free transportation to and from hospitals, free hot lunches, and free treatment for their “bad blood,” which was the term used for sicknesses such as anemia, fatigue, and syphilis. Of course, being a minority and living in an area with poor medical attention, many men accepted these benefits being offered in return for their participation in the study. The participants accepted without knowing whether they had syphilis or not. Many accepted without knowing what the disease even was. They actually never knew that they had signed up allow researchers to observe the further deterioration of their health rather than prevent it. In an interview, Mr. Pollard, a participant, said “they sit me down in the chair and the nurse and the doctor got behind and give me the shot…. I stayed in bed ten days or two weeks and the nurse came out there and give me some pills.” Mr. Pollard also mentioned the fact that there was no clinic or hospital in his community. He and other participants would meet under a tree and go into Siloh School. He had continued to participate only because they had told him that he had “bad blood” and that they were supposedly giving him medicine for it, and so he trusted the researchers.2

The U.S. PHS decided to extend the study for five to ten years, to watch the effects of untreated syphilis over time, which they referred to as a “study in nature.” Continuing to mislead the patients, they led those patients to believe that they were continuing to receive medical treatment. However, researchers merely wanted to see the long-term effects of untreated syphilis. The men had to go through several uncomfortable tests and spinal taps, which were very painful and of no benefit to them. The researchers were the only ones who knew what was occurring. When penicillin became the accepted treatment for syphilis in 1945, the men were never offered it nor informed about it. The subjects were never given the alternative of quitting the study after the new, highly effective treatment became widely used. The conditions of the study continued right up to the deaths of the patients. Family members of the deceased patients were required to turn over the corpse for an autopsy in order to secure funeral benefits.

The study continued for forty years, until a public health service investigator raised questions and concerns about the experiment. Peter Buxtun wrote to the director of the U.S. division of venereal diseases about the ethics of the experiment, but the agency ignored him.3 He then in turn leaked information about the study to the Associated Press reporter Jean Heller, who exposed the study. In an interview with Heller, she explains how a letter from Buxtun’s supervisor had told him to ignore his findings on the study and that there was nothing wrong. She believed this is what acknowledged that something wrong was going on. Heller’s story appeared on the front page of the New York Times where everyone learned of this highly unethical study. The study was finally brought to halt, and due to the criticism, the Tuskegee Syphilis Ad Hoc Advisory Panel was formed.4 The panel, composed of nine members, five of them black, concentrated on two issues. First, was the study justified in 1932, and had the men given their informed consent? Second, should penicillin have been provided when it became available in the early 1950s?5 The panel made their claims and pointed out what was unethical; however, the facts they presented were not necessarily true. They claimed how wrong it was to not give treatment to the men, however, the researchers pointed at how their intentions were to only observe the progression of syphilis. Therefore, several doctors involved in the study were easily able to justify the experiment.

After forty years, over five hundred of the original participants had already passed, along with some of their wives and even children, who had also contracted syphilis. The families remained quiet and unheard, keeping in silence the anger and shame as well as possible damage to their health. Albert Julkes Jr., whose father was a subject in the study, said, “You get treated like lepers… People think it’s the scourge of the earth to have it in your family.”6 It was an embarrassment to be one related to someone who was a participant in the study because many people would see them as ignorant and thought they didn’t know better.

On July 23, 1973, a class-action lawsuit was filed in the U.S. District Court for the Middle District of Alabama on behalf of the men in the study. A ten million out-of-court settlement was reached and the U.S. government promised to provide for lifetime medical benefits and burial services to all living participants. Along with that, the Tuskegee Health Benefit Program was established to yield these services. Congress also passed the National Research Act, which was targeted in preventing the exploitation of human subjects by researchers.

As a result of this study, many African Americans developed a fear and mistrust of public health officials, so they would not seek medical attention. To help with the healing, on May 16, 1997, President William J. Clinton gave an apology to the eight remaining survivors of the study done in Tuskegee.

“The United States government did something that was wrong — deeply, profoundly, morally wrong,” Clinton said. “It was an outrage to our commitment to integrity and equality for all our citizens. To the survivors, to the wives and family members, the children and the grandchildren, I say what you know: No power on Earth can give you back the lives lost, the pain suffered, the years of internal torment and anguish. What was done cannot be undone. But we can end the silence. We can stop turning our heads away. We can look at you in the eye and finally say on behalf of the American people, what the United States government did was shameful, and I am sorry.” – President Clinton 7

Many apologies were made to the men still living and their families; however, this does not erase what had occurred for forty years. This experiment was a turning point in the creation of modern bioethics. Many new laws and policies are now in place to ensure that patients are precisely aware of what will be done or administered to them. For example, a television commercial about cough medicine will now have a long list all the possible side effects that can occur from taking it. This is called informed consent, which has been greatly emphasized since this study occurred. Since there was such an emphasis on having ethical studies, the government also halted another study that occurred around the same time in Guatemala. From 1946 to 1948, men and women were purposely infected with syphilis to determine whether penicillin was effective. The results of this study were never published. If the Tuskegee Syphilis study had never occurred, the continuous injustice and unethical experiments would not have come to a halt. It is now more important than ever to make sure that all studies or experiments are done fairly and for all the right reasons.