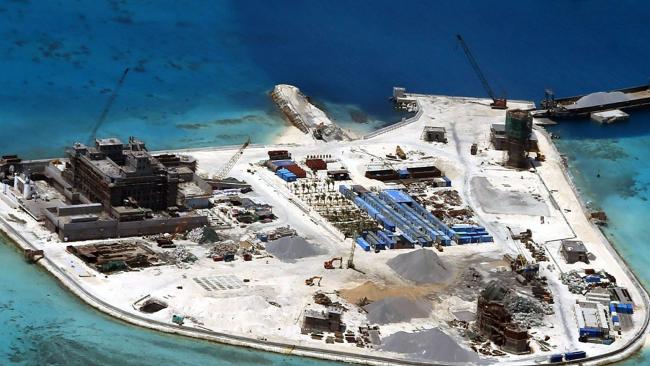 Since the end of Second World War, the United States has been the leading military and economic power not just in the Americas, but in the world.  This status is being challenged on an almost daily basis by a nation amassing more and more global power. According to the Yale Economic Review, China’s economy has been accelerating at a growth rate in the double digits.1 This presents a great concern for many involved in American foreign policy.  A question persists: is China a friend or a foe of the United States?  For many years, the fast-growing Chinese economy was troubling, but in recent years, the Chinese have also increased their military power by their amplified presence in the South China Sea.  A few years ago, China made the unprecedented move of militarizing the South China Sea by constructing man made islands in the area over the Spratly Islands.2 Not only is the prospect of a more agile Chinese military a grave threat, but what does this mean for Chinese territorial waters? Does creating installations on artificial islands extend Chinese territorial claims into international waters?  This question has been worrying many in foreign policy and leads to the second question of how can the U.S. prevent further encroachments by China?  Fortunately, the UN Convention on the Law of Sea has the answer.3

Beginning in 2014, Chinese President Xi Jinping ordered his military to begin militarizing small patches of land in the South China Sea that are collectively called the Spratly Islands.4  The Spratly Islands are home to a wide array of oceanic life and are claimed not just by China, but also by the Philippines and Vietnam. President Xi Jinping refused to let these conflicting claims deter him from making his country’s military presence in the area greater and more mobile. Chinese military engineers began covering various islands in tons of additional sand to build them up and make them more stable.  After this step, the Chinese military built communications towers and then, frighteningly, they constructed missile silos on these islands.  China is also making sure no fishermen from the Philippines, nor individuals from any other nation come close to the artificial land masses.5.  The United States’ Navy has performed many drills in the region that were harshly denounced by China who claims that the US Navy is threatening its sovereignty.  This raises a series of other questions, however, as several other nations are declaring that the Spratly Islands fall within their exclusive economic zones.

According to the 1982 UN Convention on the Law of the Sea, territorial waters originate at a nation’s coastal baseline, which is the low water mark of a country’s ocean, and extend outward a distance of twelve nautical miles, or 13.8 land miles.  Exclusive economic zones occur beginning at this baseline of territorial waters and extend two hundred nautical miles outwards.  In addition to this clause, article 60 of the UN Convention states that as long as it is within a nation’s exclusive economic zone, the construction of artificial islands and their maintenance is sanctioned.6  This would seem as though it would settle the matter, but the primary issue is that while the Philippines, Malaysia, Brunei, and Vietnam are all claiming that the Spratly Islands lie within their exclusive economic zones, China is saying that historically, this region of the South China Sea belonged to them.  They claim this because the waters used to belong to them, and their fisherman continue to fish there.  China is frequently increasing the number of navy ships that patrol the islands to ensure that no other country can challenge their hold on the area.  The Chinese government believes that since their fishermen and military have been using the islands for centuries, they possess a natural claim to them, despite what other nations say.7  Understandably, this poses a significant threat to the United States as China is already an economic powerhouse with a military that has increased its maneuverability.  Hence, the reason why the United States’ government has been sending portions of its naval fleet to patrol the seas and routinely survey the area to see what China’s next move will be.

Actions like these are what make foreign policy experts wary of whether China is an ally rising up, or an enemy growing in both military and economic strength biding its time.8 The UN Convention on the Law of the Sea states explicitly that artificial islands in no way extends a nation’s territorial waters.9.  While this may be the case, China does not seem to mind militarizing them and driving away anyone who gets too close to the Spratly Islands. When attempting to answer the China question, one must be cautiously optimistic. With their robust economy and the fact that they are major trading partners with the U.S., it is important not to automatically assume that they are a threat that must be dealt with.  While it is not yet clear what China’s true intentions are, the Chinese nation presents at its best, a bullying and assertive friend, and at its worst, a belligerent and dangerous adversary.

UN Convention on the Law of the Sea

I have always wondered if China is truly an ally or just someone we try to not bother. Therefore, we are on neutral terms, nor good nor bad. But like the article shows, one misunderstanding can lead to a big battle. I do agree with keeping an eye out for China’s “next move” because we have to be prepared. This article reminds everyone that we can’t push things too much.

China is claiming sovereignty in the South China Sea which does not belong to them. Just as how China deserves its sovereignty to not be overlooked, other states’ sovereignty such as the Philippines, Vietnam, Indonesia, Malaysia, etc, should be respected. But I think because these states are not as powerful, China thinks it can easily take that land from them. It is alarming the pace that China is expanding, though we shall not make an enemy of it but be prepared. With the trade war today it is hard to tell where all of this is going to take the U.S-China relations.

China seems to be disrespecting it’s neighbors in the South China Sea. China isn’t trying to be subtle about it’s expansion either, with military presence following it’s artificial island expansion. If China is really trying to expand, I’m sure that hostility will rise between the U.S and China, as tension has already increased due to the current trade war. Surrounding island countries are sure to be against the expansion as well, and it doesn’t seem like China seems to care.

It’s obvious from the information presented in this article that China isn’t being subtle about this expansion of theirs at all. It’s also clear that they don’t have a lot of respect for their neighbors in the area either. If anything I’d be concerned as to what China is doing as of late, international business such as this shouldn’t be ignored!

China is guaranteeing sway in the South China Sea which does not have a place with them. Similarly as how China merits its sway to not be neglected, other states’ power, for example, the Philippines, Vietnam, Indonesia, Malaysia, and so forth, ought to be regarded. However, I think in light of the fact that these states are not as ground-breaking, China supposes it can without much of a stretch take that land from them. It is disturbing the pace that China is extending, however we will not make an adversary of it but rather be readied. With the exchange war today it is difficult to tell where the majority of this is going to take the U.S-China relations.

Nice article. I do not believe that China is a friend of the United States at all. I believe that they are biding their time until they are ready to challenge the United State’s dominance. It will not be long now before they will challenge us in the South China sea and also in the Pacific. It is scary to think that not too many years from now the U.S will no longer be the only superpower in the world. We need to keep our allies close to us.

this article was an interesting read. It is obvious that China is expanding and does not care who knows. There is already so much tension between china and the us, although there is already tension I am sure it will grow. As of now the us is a friend of China. In the near future will this change?

I personally dont think China is a friend of the US, i think theyve tried to keep somesort of peace with the US only long enough to their ready to challenge the US. I think china is tired of the US being the biggest power and is ready to claim that title. I think we should keep a close eye on them as people say “keep your friend close and your enemies closer” and i think this is something that can be applied to china.

very interesting read, Max! Reading the article triggered memories of learning about international law as it relates to the ownership of the surrounding sea in my intro to global affairs course. However, we did not go into the idea of artificial islands and what the legal literature had to say about them. China definitely seems to be looking for loopholes to expand its power and assert it’s dominance.

The author of this article did a good job of giving a brief but detailed background on the relationships between the United States and China. I liked how the article focused on the background and then slowly gave details that presented more current-day issues with China. As someone who enjoys researching foreign relations, I found this article very well written, and relevant.