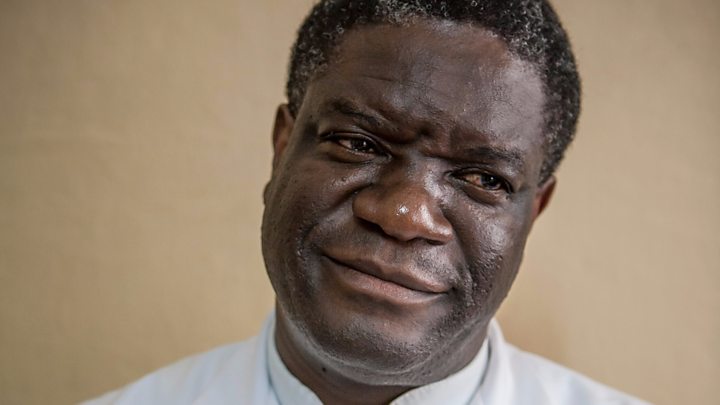 In what has been called the “rape capital of the world” by a top UN official, Dr. Denis Mukwege offers hope to women whose attacks destroyed their bodies and now their lives. Before filling a desperate need and specializing in rape trauma surgery, Dr. Mukwege aspired to help women of the Democratic Republic of Congo (DRC) by providing better maternity care. In the DRC, one percent of women die during childbirth (to put it in perspective that is 1 for every 100 which makes Congolese women 8 more times likely to dye than in “developed countries,”  where the number is on average of 12 in every 100,000).1 However, shortly after he founded the Panzi Hospital in 1999, Dr. Mukwege’s life took an entirely different course when his first patient was admitted. Instead of looking to have a baby, she sought treatment after suffering a rape where the assailants, from one of the many military groups in the DRC, had shot her in the genitals.2 Shortly after this event, the hospital cared for forty-eight baby girls, all raped by a local mans army, one of the tens of military, paramilitary, rebels, and foreign militant groups who use terror to displace locals and refugees in an attempt to secure natural resources.3 Luckily, these particular rapes stopped after the hospital and other human rights groups convinced a military court to prosecute the case.

Though Dr. Mukwege did not realize it at the time, founding his hospital in Eastern Congo would help him “become the world’s leading specialist in the treatment of wartime sexual violence and a global campaigner against the use of rape as a weapon of war.”4 Caring for more than 3,500 women per year, and sometimes up to 10 women a day, Dr. Mukwege, as well as 370 doctors, nurses and support staff, do more than simply repair women physically, they also work to improve their lives in many meaningful ways.5 They follow a five-pillar method. The hospital works with each woman to provide physical medical treatment, psycho-social therapy, socioeconomic support and training, community reintegration and, finally, legal assistance in done in the order listed. A senior advisor to Dr. Mukwege, Elizabeth Blackney, describes this program as:

“Once [women] get through [their] psycho social and medical healing, [they] move on and work with our socioeconomic pillar [to] learn literacy and numeracy and education. [Women] have a safe space to learn vocational skills. And then we of course provide legal aid and assistance to help people get justice.”6

This work is not done without risk, however, and, in 2012, shortly after giving a speech at the United Nations in which he called for an end to the corruption within the government of the DRC, and stated not enough was being done to stop “an unjust war that has used violence against women and rape as a strategy of war,” five armed men stormed the Mukwege family compound in an attempt to assassinate Dr. Mukwege, his wife, and two daughters.7 While Dr. Mukwege and his family survived, his trusted friend and bodyguard, Joseph Bizimana, died protecting the family.8

Though he fled to Belgium, he returned to the DRC not long afterwards, when women of the DRC sold their harvests and raised money to buy Dr. Mukwege and his family plane tickets back. When asked about his return, Dr. Mukwege told the British Broadcasting Network that “[a]fter that gesture, I couldn’t really say no. And also, I am myself determined to help fight these atrocities, this violence. My life has had to change, since returning. I now live at the hospital and I take a number of security precautions, so I have lost some of my freedom.”9 Despite the danger to his own life, Dr. Mukwege continues to transform the lives of many Congolese women in powerful, positive, and lasting ways. He is the light for thousands of women and continues to champion for the protection of women from current and future horrors that are the hallmarks of the conflict in the DRC since the mid 1990s. Proof of his incredible impacts is a woman named Sarah. Her attackers, after slaughtering her village, tied her to a tree where she was brutally raped by different men for days. When she arrived at the hospital, she was in critical condition, unable to even stand on her own. But, as each day passed, her will to live became stronger, and “[t]oday, Sarah is a beautiful, smiling, strong and charming woman…[who] runs her own business…bought a plot of land…has built a little house [and] is independent and proud.”10 For these efforts and all of his contributions, in October of 2018, he was announced as the co-recipient to the Nobel Peace Prize with Nadia Murad “for their efforts to end the use of sexual violence as a weapon of war and armed conflict.”11

This article is well explanatory in Dr. Denis Mukwege’s work against rape and sexual violence. He has helped so many young women in moving forward and restoring their hope in their lives, seeking justice to the victims and providing better care in reducing the maternity mortality rate. Dr.Mukwege is truly an inspiration and a captivate miracle to the Congolese people.

To me, this article was really touching. Rape is still an ongoing tragedy that leaves victims feeling like they no longer have a purpose in life. Rape takes a toll on not only a persons mental but physical health. Denis Mukwege did everything in his power to help thousands of victims. Mukwege helped victims mentally, physically, financially, and educationally. All these women of different ages left his care feeling like they have a new found purpose in life, they are now striving. I thank doctor Mukwege for helping all his victims.

I’m amazed by the difference one person can make. Dr. Denise Mukwege’s willingness to open the Panzi Hospital and help provide physical, medical, and economic help for the women in the Democratic Republic of Congo is inspiring. His dedication to campaigning against the use of rape as a weapon of war even after an attempt to assassinate him shows his braveness and generosity. It’s sad to hear stories like Sarah’s and know that this is something that women in the DRC have to experience. This is a great article that raises awareness of the efforts to end the use of sexual violence as a weapon of war.

This is such an amazing article, I had no idea who Dr. Mukwege was, but this man is a walking miracle. His efforts to stop sexual violence as a war tactic and his treatment to these women is truly inspirational. With the implementation of the five pillars, these women are able to grow from being hopeless to leading amazing lives. Dr. Mukwege has done so much for these women where it was desperately needed. This article is written very well and brings light to a very important topic that we cannot look past. Sexual violence happens all over the world and there is a necessity to make efforts to bring down the rate, or even eliminate it in total.

What a touching article! I had never heard about Dr. Denis Mukwege and I feel like he should be someone everyone looks up to. I love his cause and it is amazing how he spread his message and helped woman within the Democratic Republic of Congo. Rape is such an awful and real problem that many people avoid talking about, but it is important that people, no matter of what gender.

Dr.Miracle was truly selfless in his efforts to help these victims. It seems like he not only helped these women recover from traumatic experiences, but he also helped them gain their confidence back to do more than just recover but to create as well. I think this article is amazing in quickly giving a great description of the obstacles that the Doctor faced that were overcome by his passion and the passion of others.

Personally, I feel a little guilty and uninformed that I had no idea who Dr. Mukwege was. I am glad I know who he is now because he has clearly had a great impact in the Democratic Republic of Congo. I thought it was a good idea to not only include what he has done or gone through but also add some of the rape survivors’ stories. It made me realize how dire the situation is in the Democratic Republic of Congo.

This article does a great job of depicting the bravery and passion that Dr. Mukwege exemplified in founding the Panzi Hospital. The reality of using rape as a military weapon is terrifying, especially if no one makes it their goal to do something about it. Dr. Mukwege’s motivation to continue providing wholistic services even after having his life threatened speaks to his character and justifies his deserving of the Nobel Peace Prize. I believe this article could benefit from also including whether or not other medical experts were motivated to also provide their expertises to campaign against the use of sexual assault as a military weapon in the DRC.

Dr. Mukwege is a true hero. I heard of this story a while back and this article had me completely captivated. Women could not speak up about rape in the DRC as they were terrified and rightfully so, but they found help and hope with Mukwege. He helped them recover physically, mentally, and emotionally. He was a safe place for women and children who were victims of such a horrific crime and he helped them get back on their feet and find their voice. It is so sad that he was forced to leave behind his creation because the DRC did not “approve” of his work. Dr. Mukwege is a hero and I will forever be grateful for his effort and the impact he had.

I found this article very touching, I am amazed by the efforts and the difference made by Dr. Denise Mukwege, especially his willingness to help provide medical and economic help to the women of the Democratic Republic of Congo. His campaign against rape as a weapon of war, despite the risk of assassination, is incredibly honorable. This article is incredibly informative and worth the read.