Down and Dirty: the Tunnel Rats of Vietnam 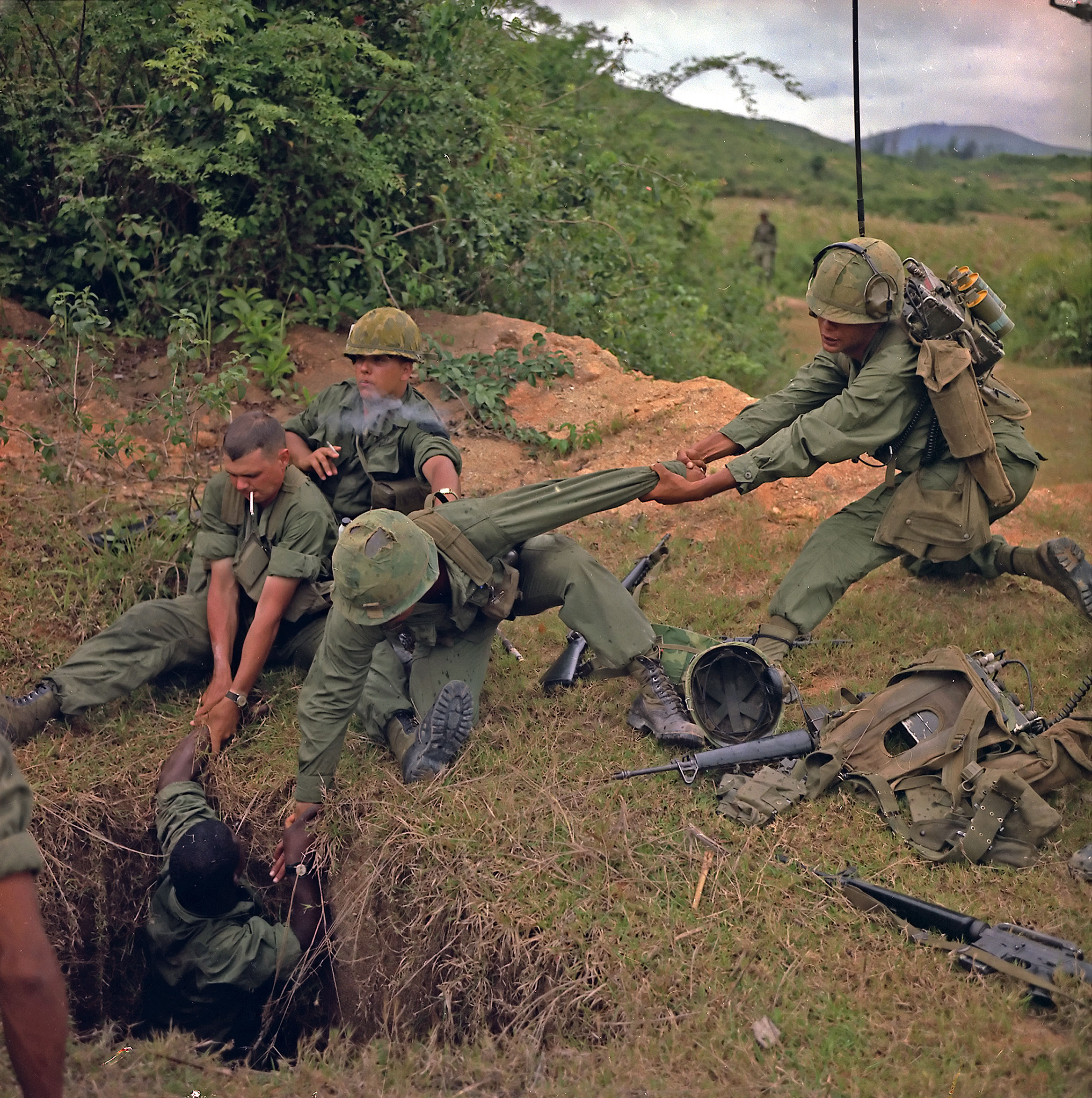 If you ever see a flashlight coming your way, you can fire away, but more than likely, you are already a dead man.1

January 7, 1966. The war in Vietnam was raging and the United States had only just begun sending regular combat units as opposed to advisers the year prior. President Lyndon Baines Johnson was steadily escalating the United States’ involvement in Vietnam in an effort to “combat communism.” Eight thousand men descend on a freshly bombed area, hoping to clean up the remnants of Viet Cong in a search and destroy operation. However, when they approached the bombed area, known as the Ho Bo woods, they found nothing but empty fortifications and some rice, evidence that there were once many more men there. The leaders of the Joint American-Australian force were stumped. Where could the Viet Cong have gone?2

They received their answer when one young American soldier sat down to rest, then began exclaiming that he had been stung or bitten on his nether regions. As he began to search for the offending creature, he discovered that what had “stung” him was a nail, protruding from a wooden hatch. This hatch covered a massive underground complex known as the Cu Chi tunnels, spanning some fourteen miles; and this was only one of many tunnel complexes in South and North Vietnam.3 The presence of these tunnels meant that future search and destroy operations would be failures as well, if the tunnels were not dealt with. These tunnels gave the Viet Cong a way to attack U.S. troops from behind, after they had passed overhead; then they could quickly slip back into their tunnels and seemingly vanish. The tunnels also allowed them to hide during bombing runs and as American tanks and helicopters flew by, effectively hiding them from the brunt of American military might. The tunnels could be destroyed using explosives, but these tunnels housed barracks, ammunition and food depots, hospitals, clinics, armories, and rooms with vital military intelligence. These things were often too deep in the tunnels to be destroyed by a blast at the mouth of the tunnel, as the Viet Cong designed their tunnels so that blasts could only destroy small segments. The tunnels were very well made, with sharp right angles every few meters to baffle the blast of an explosive charge, and they had breathing holes dug by taking rabbits and gophers to the bottom of a tunnel and letting them dig themselves back to the surface.  After several attempts using tear gas, Acetylene gas, and explosives to flush out the tunnels failed, a new plan emerged. Someone would have to enter the tunnels.4

And thus, the “tunnel rats” were born. These were men, generally small in stature to better fit the small tunnels designed for the smaller Vietnamese physique, and without fear of tight spaces or total darkness, although these are things many tunnel rats would develop after their time in the underground complexes. Armed with nothing more than a flashlight, which was hardly ever used for fear it would alert Viet Cong to the Tunnel rat’s location, a handgun, and a combat knife, sometimes wearing a battery-powered headset, connected to a long cable to let them relay information back to their comrades waiting at the mouth of the tunnel, these men would be lowered into a tunnel, and begin their search.5 Originally made up of men from the famous “Big Red One” 1st Infantry Division present at the original discovery of the Cu Chi tunnels, “tunnel rats” became an unofficial description for someone who had volunteered for this job. This work was mentally and physically taxing, with many volunteers giving up the duty after a few runs, or in many cases, a close call with a Viet Cong soldier in the dark confines of a cave.6

Part of the reason it was such a loathed experience was due to how dangerous an ordeal exploring the tunnels was. If an American tunnel rat were to run into a Viet Cong soldier, the encounter would devolve into hand to hand combat, as firing one’s pistol was very dangerous in tunnels that were barely shoulder-width.7 Firing the large .45 caliber M1911A1 pistol one was issued would definitely lead to ruptured eardrums. This led many of these men to bring captured Vietnamese-used Russian pistols or guns brought from home that were of a smaller caliber–.22 and .38 caliber revolvers being particularly common–that could be more safely fired in the small confines of the tunnels.8

The dangers did not end there either, as the tunnels were frequently booby-trapped, sometimes even with poisonous or venomous snakes and insects, or they had dangerous pits filled with water or gas designed to keep these things away from their living areas of the tunnels. The tunnels were frequently incredibly hot and humid, cramped, sometimes as small as 2.6 feet tall by 2.5 feet wide, and full of unpleasant stagnant air, prompting many tunnel rats to don gas masks in an attempt to make breathing easier.9 Even exiting a tunnel was not safe, as a tunnel rat could travel some distance while underground, then emerge elsewhere, potentially startling a nearby American soldier, which could lead to him being shot. Many tunnel rats would bring smoke grenades with them to use to alert any nearby troops that a friendly would be emerging from a tunnel.10 Because of these hardships, tunnel rats soon gained a reputation as being very courageous, smart, and incredibly lucky to escape a tunnel without dying, and the tunnel rats themselves began to use the motto “Non gratum anus rotendum” or “not worth a rat’s ass.”11

Even with these difficulties, the majority of tunnel rats were very successful. The tunnel rats of the 1st Infantry Division, the only one with any kind of formal training, was especially successful. Consisting of a number of men formally trained to enter the tunnels, radio operators to communicate with them, a medic and a pair of former Viet Cong who could act as translators, the team, led by Sargent Robert Woods, killed 3 Viet Cong soldiers and captured 153 more in a tunnel in August of 1968, just to name one of their most impressive raids. Outside of the formally trained 1st Infantry Division, the volunteer tunnel rats of other companies were sometimes successful as well, securing vital military intelligence, an enemy hospital, or sometimes stores of weapons; these captures accounted for a large portion of seized Viet Cong weapons.12

The tunnel rats where born out of necessity. The United States military had little experience with non-conventional warfare, and needed to adapt quickly to the guerrilla warfare employed by the Viet Cong. During the Vietnam War, even the Australian armed forces had their own “tunnel rats” whom they called “ferrets,” and with the Soviet war in Afghanistan in the 1980s, many Soviet soldiers faced similar hardships in the tunnels of the Mujahideen. Even today, the United States Marine Corps faces similar issues in fighting the Taliban in the cave-like “Kyareses,” or irrigation tunnels of Afghanistan.13 The tunnel rats of Vietnam were one of the first adaptations that the U.S. military made to prepare itself for a new type of warfare, unlike the conventional wars the U.S. had fought in before. But as the number of US casualties from Vietnam rose, American public opinion shifted from support to dissatisfaction, ultimately leading to the United States pulling out of Vietnam, but not before the United States military had learned valuable lessons about guerrilla warfare.