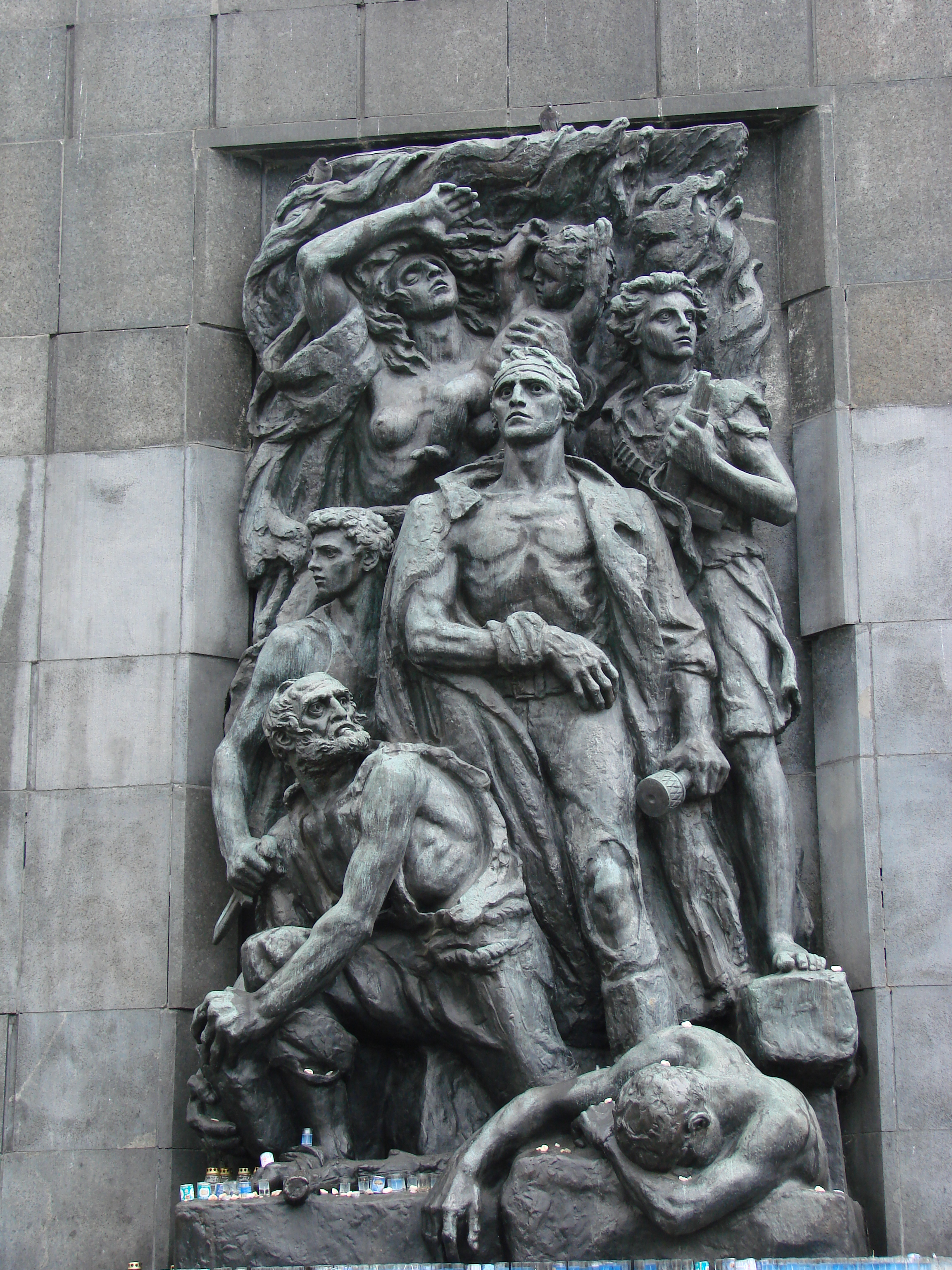 “By the 1950s, the English term Holocaust came to be employed as the term for the murder of the Jews in Europe by the Nazis. Although the term is sometimes used with reference to the murder of other groups by the Nazis, strictly speaking, those groups do not belong under the heading of the Holocaust, nor are they included in the generally accepted statistic of six million victims of the Holocaust.”1 Six million is the number associated with Adolf Hitler’s murder of Jews who died during the Holocaust. The Holocaust is that episode in human history that leaves people with many questions. One of those questions is about why the Jews didn’t fight back?

Beside the fact that Jews had no access to arms and were surrounded by anti-Semitic groups, many Jews were simply unaware of what was going on. They were told that they were being relocated to a new home “in the east” and had no reason to worry.2 Another contributing factor as to why many were afraid to fight back was the German policy of collective reprisal, where helping a person of Jewish faith or origin was punishable by death, and not just for the ones helping, but also for their families.3 Entire communities were held collectively responsible, which stopped others from even trying to fight back.

The Nazis set up special “ghettos” as a part of Hitler’s plan for ridding Europe of Jews. The Nazis established these ghettos under German control to confine Jews to one concentrated area segregated from the rest of the population until those Jews could be sent either to their death or to forced labor camps. The Warsaw Ghetto, located in Warsaw, Poland, was at first enclosed with barbed wire, only to be replaced with a brick wall 10 feet high and 11 miles around. Five-hundred-thousand Jews in the surrounding areas were herded into the 840 acre ghetto until the summer of 1942. Many Jews living there had no housing at all, and the lucky few who did were typically crowded into dwellings with an average of nine people per room. Because of these unlivable and inhumane conditions, thousands died each month due to starvation and diseases such as typhus.4

When the Germans issued the order for the extermination of the Warsaw ghetto, the Jewish residents suddenly realized the gravity and inevitable reality of their deaths. From July to September of 1942, the Germans began the massive deportation and murder of the Jews in Warsaw, with transfer numbers being about 5,000 sent to the nearby death camps per day. SS and police units deported around 265,000 Jews to the Treblinka killing center. Another 11,000 were sent to forced-labor camps. Another 10,000 were murdered, and only 35,000 were granted permission to remain in the ghetto.5 For the remaining Jews in the ghetto, deportation seemed inevitable.

When reports of these mass killings at Treblinka reached Warsaw, and in response to these deportations, several underground Jewish organizations set up an armed self-defense unit. “We saw ourselves as a Jewish underground whose fate was a tragic one, the first to fight. For our hour had come without any sign of hope or rescue,” said one ZOB leader.6 The ZOB, or the Zydowska Organizacja Bojowa, was composed of roughly two-hundred members known as the Jewish Combat Organization. Another Jewish resistance group was the Jewish Military Union, or the Zydowski Zwiazek Wojoskowy (ZZW), which was formed by the Revisionist Party. At first, there was tension between these two groups, but in attempts to strengthen themselves by numbers, they decided to work together against the Germans attempting to destroy the ghetto.7

In October of 1942, the Germans issued the final liquidation of the ghettos, and a deportation of another 8,000 able-bodied residents to forced labor camps. Because of this, in January of 1943, German SS and police units tried to resume these mass deportations from Warsaw. A group of these ZOB Jewish fighters, armed with pistols, and making use of the hiding places they had created since April, infiltrated a column of Jews that were being sent to the transfer point. Given the prearranged signal, they broke ranks and fought the Germans who were escorting them. Many of these Jewish fighters died in this battle, but not in vain. The attack was just enough to disorient the Germans, which allowed for the Jews who remained in columns to disperse and make a run for it. After having seized between 5,000 and 6,000 of the ghetto residents on January 21st, 1943, the Germans suspended their deportations until April 19th, in honor of Hitler’s birthday on April 20th, and the eve of Jewish Passover.8

With the apparent success of this resistance that seemingly halted deportations, the members of the ghetto population were only encouraged to prepare for an uprising. The Jews in the ghetto believed that what had happened in January only proved that resisting was the key. They saw resisting the Germans as a possibility to end their heinous acts and defer the Germans from continuing the rest of their plans. Many began to believe that the Germans were only going to continue so long as they remained passive, and that to fight back was their only chance. After the last battle in January, those living in the Warsaw ghetto began to construct underground bunkers and shelters to prepare for an attempted final deportation by the Germans. They spent weeks training, making and acquiring arms, and making their plans to defend the ghetto. Nine months later, on April 19, 1943, the day intended for final liquidation, they mounted the Warsaw Ghetto Uprising.9 SS and police units entering the ghetto that morning saw a nearly deserted ghetto. Nearly all of the residents had gone into their hiding places or to underground bunkers.

Jewish fighters, led by 23 year old Mordecai Anielewicz, and armed with pistols, many handmade grenades, and a few automatic weapons and rifles that had been smuggled into the ghetto, surprised the Germans and their auxiliaries. The Germans were caught so off guard that they had to retreat to outside the ghetto walls. On this first day alone, German commander SS General Jürgen Stroop reported losing twelve men, killed and wounded.10

“The entire sky of Warsaw was red. Completely red.”11 In an attempt to force the remaining Jews out of hiding, on the third day of the uprising German General Stroop began to completely destroy the ghetto to the ground. Jewish resistance fighters continued to fight back by making sporadic raids from their bunkers, but the German numbers were many, and they reduced the ghetto to rubble.

On May 8, young Jewish commander Mordecai Anielewicz, along with those with him, were killed by the German forces in an attack against the ZOB command bunker. However, because of this uprising led by Anielewicz, and the organized military resistance, many other individual and small groups were inspired to hide, many in the sewers, or fight the Germans for nearly another month.

As if the entire destruction of the Warsaw Ghetto was not enough to commemorate the German victory, Stroop ordered the destruction of the Great Synagogue, one of the greatest buildings in Poland and the largest synagogue in the world at the time. Stroop then wrote his report, “The Warsaw Ghetto Is No More,” and reported having captured 56,065 Jews, and destroying 631 bunkers. He estimated that he and his units killed up to 7,000 Jews during the Warsaw uprising, and deporting about another 7,000 to the Treblinka killing center, where many died instantly by gas chamber.12 Casualty numbers on the German side are uncertain, but it is likely that they lost several hundred soldiers during the 28 days it took them to kill and deport over 400,000 Jews.

Even after the tragic ending of the Warsaw Ghetto Uprising, many individual Jews remained hiding in the ruins, and continued to attack the German patrols and their auxiliaries. The Warsaw Ghetto Uprising was the first, largest, and symbolically most important Jewish uprising. Because of this, they inspired other uprisings in the ghettos. The significance of this uprising goes beyond the fight. Anielewicz wrote, “My life’s dream has now been realized: Jewish self-defense in the ghetto is now an accomplished fact.…I have been witness to the magnificent, heroic struggle of the Jewish fighters.”13