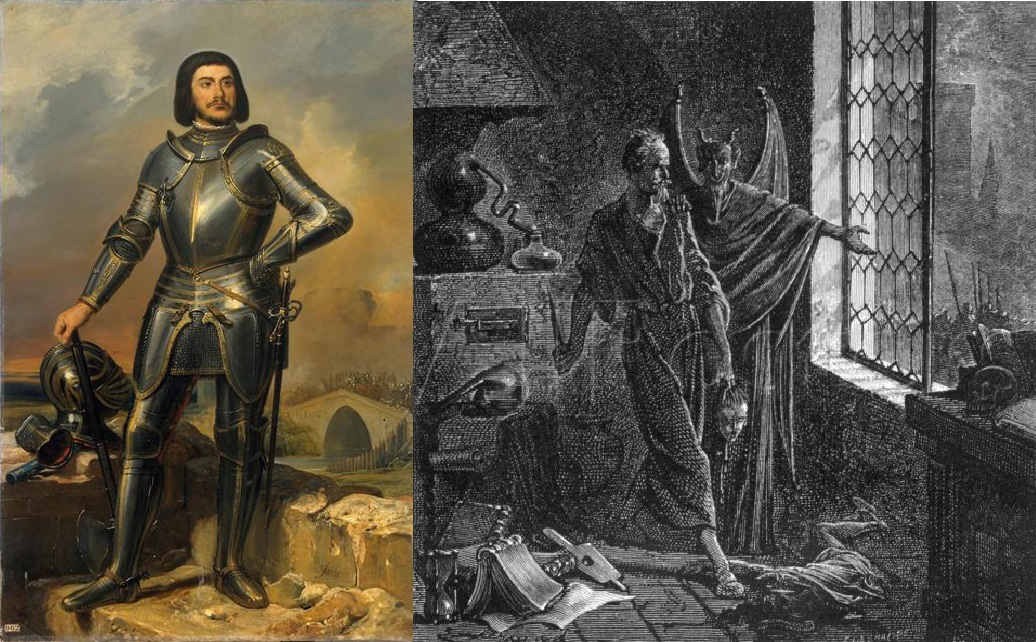 With so many serial killers sprouting during the twentieth century, the name Gilles de Rais may not ring a bell to many. Rais, however, is an interesting character, as his killings predate most known serial killers. While many serial killers from the twentieth century seem to share some similar backstories—one that involves having an abusive childhood or living with an antisocial behavior—Rais seems to be an exception. Bear in mind that we do not know everything about Rais’ childhood, since we can only find so many things about a man who lived in the early fifteenth century, but from what we do know, Rais was raised well and had a promising life. How does a man growing up having wealth, power, religious faith, nobility, and an honorable soldier status succumb to the vile temptations of sodomy and murder? The life of Gilles de Rais is as fascinating as it is horrific.

Gilles de Rais was born in 1404 and grew up in a wealthy family in northern France. At the age of eleven, he inherited an enormous amount of wealth, and his fortunes drastically increased when he married into another rich family. Given the title Baron and Lord, Rais was described as a handsome man, who was well-mannered and charismatic.1 Furthermore, he became a soldier around the age of sixteen and participated in the Hundred Years’ War as a leader in the French military.2 Later on, the king of France, King Charles VII, gave Rais the prestigious title of Marshal of France. During his time in the French military, he fought alongside the young Joan of Arc, and Rais became her chief lieutenant in the process. Being a devout Christian, Rais’ respect and admiration for Joan was immeasurable. He grew to love her, not romantically, but rather on a spiritual level.3 Having had such an unprecedented reputation up to this point, how does a nobleman like Gilles de Rais stoop to become a sadistic serial killer?

This radical change in Rais started when his companion Joan of Arc was burned at the stake by her enemies in 1431. Upon hearing the news, Rais felt betrayed by both God and the Church for abandoning Joan. He truly believed his many years of worship and devotion to God had all amounted to absolutely nothing.4 Soon after Joan of Arc’s death, Rais retired from the military and returned to his castle, where he started to spend all of his wealth on extravaganzas ranging from plays, festivals, banquets and tournaments—all of which was open to the public all day long. Rais’ wealth supplied these events with a large variety of luxuries: choirs, comedians, jugglers, rich clothing for his guests and horses and even animals such as sheep and oxen that fed over 500 people on a daily basis.5 The party could only last for so long, however, as Rais’ wealth was rapidly diminishing.

Once his wealth was depleted, Rais turned to alchemy, which was the attempted practice of transmuting base metals into pure gold. Rais invested heavily into this, as he turned a good chunk of his castle into an enormous laboratory. In the process, he invited many alchemists and sorcerers around Europe to aid him. Despite their hard work, no one was successful in creating gold. One day, an Italian sorcerer by the name of Antonio Francisco Prelati approached Rais. He told Rais that he needed the help of Satan in order to succeed in making gold, which would require doing heinous acts in his name. Willing to do anything for wealth, Rais agreed. In his first act, Rais tricked a peasant boy into his castle and from there he murdered the boy and wrote down formulas and evocations using his blood. In the end, Rais was unable to summon Satan or create gold. It was in this attempted summoning that Rais developed a desire for killing. From here on out, Rais’ need to torture and kill children sadistically was far greater than his need for gold.6 This would be the start of Gilles de Rais’ killing spree—one that would take the lives of over a hundred children.

Over the course of eight years, from 1432 to 1440, Gilles de Rais—with the help of several loyal accomplices—would perform erotic torture on his victims, who were all underage children, mostly boys. The causes of death ranged from dismemberment and decapitation, to strangulation.7 One method of attracting children to Rais was to have parents hand their children over to him in exchange for money, clothing, and food. In return, the parents were led to believe that Rais would train their children to be knights or choirboys. Many of Rais’ targets were children beggars who would stop by Rais’ castle asking for food. Whenever the beggars came by, Rais would look out the window of his castle with his servants and point out the children that he wanted brought to him.8

By 1440, rumors had spread throughout the country about children going missing in the area, particularly near the castle of Champtocé: Gilles de Rais’ castle. Many people started to accuse Rais of kidnapping these children, and witnesses also came forward. These accusations became so wide-spread that the Church and authorities started to investigate. What led the Church to take action was the kidnapping of a cleric from the parochial church of Saint-Etienne-de-Mermorte. Rais had had him as a prisoner for several months, until the Church intervened. Rais and his accomplices were then arrested and put on trial.9 There had already been accusations long before Rais’ arrest, but the witnesses had been too intimidated to come forward, for fear that Rais’ men would harm them. After all, Rais was one of the most powerful men in France at the time.10 Many of the witnesses had suspected Rais to be the one responsible for the children disappearances, but had no idea as to what his motives were. One witness described one instance where Rais’ men were seen carrying away roughly forty skeletons from one of Rais’ towers.11 With so many children going missing, Rais was eventually bound to get caught.

The trial was led by the bishop of Nantes, the chancellor of Brittany, the vicar of the Inquisition, and the president of the provincial parliament.12 At the trial, most if not all of Rais’ atrocities became known to all. He willingly confessed to all of his crimes in horrific details. Rais’ servants, such as Etienne Corrillaut, testified to some of his evil deeds. A document written at the time of the trial says: “…[Corrillaut] testified and said that while he was present and listening, he heard Gilles boast that he took greater pleasure in killing and cutting the throats of these boys and girls, in having them killed and their throats slit, in seeing them languish and die and their heads and limbs cut off one after the other and in the sight of their blood than he did abusing them sexually.“13 Furthermore, Corrillaut said that Rais would put the children’s heads and limbs up on display (some of them had already been dead for several days) and show them off to his accomplices. He would even go as far as to have a beauty contest by asking his accomplices which of the deceased children were the most handsome, as he kissed their severed heads and faces. Much of the children’s corpses were later buried or cremated.14

Aside from the murders, Rais confessed to have evoked evil spirits on multiple occasions, and made pacts with demons to obtain knowledge, wealth, and power. Interestingly, Rais would offer anything to these demons with the exception of his soul. In one of these offers, Rais would present the heart, eyes, hand, and blood of a child to a demon named Barron as a sign of tribute. Rais would also visit heretics, sorcerers, and conjurers to learn about the magical arts of geomancy and necromancy—which was forbidden and seen as heresy by the Inquisition.15 Brother Jean Blouyn, vicar of the Inquisitor—present at the trial—wrote: “…Gilles, the accused, has been, was and is a heretic, an apostate, a sorcerer, a sodomite, an evoker of evil spirits, a diviner, a murderer of innocent children, a criminal, a backslider and an idolater who has deviated from the faith and who is illy disposed of it…“16

In total, at least 140 children died at the hands of Gilles de Rais. Some reports even say that the death count reached as high as 800. In the end, Rais was sentenced to death by hanging, followed by burning, on October 26, 1440.17 And so came to an end the life of Gilles de Rais, who was executed at the age of 35. Surprisingly, Antonio Francisco Prelati, the sorcerer who evoked demons for Rais, and several others only served a few months in prison. Their reduced sentences may have been the result of their cooperation in testifying against Rais during the trial.18

It is easy to assume that after getting involved in occult practices, Rais became a full-blown Satanist. However, there is some speculation as to what his exact beliefs were. Despite consulting demons and performing sodomy, two years prior to his trial, Rais showed regret for all of his crimes and swore, vowed, and made a promise to God that he would never commit any more heresy and that he would travel to Jerusalem on a pilgrimage to repent. Not long after, Rais relapsed, as he continued to sodomize and murder.19 There is also the fact that he was unwilling to give up his soul to the devil. Rais may have believed that by confessing to all of his sins, he would have a greater chance at being forgiven by God.20 Near the end of the trial, Rais had gotten down to his knees and begged God for mercy. In a document written at the trial, Rais told people that “as a Christian, he was their brother, and urging them and those among them whose children he had killed, for the love of Our Lord’s suffering to be willing to pray to God for him and to forgive him freely…“21 Was Rais truly repenting for all of his crimes, or was this an attempt to manipulate the Inquisition? This is one question that has been left unanswered for centuries.

One might also wonder what exactly caused Rais to commit such blasphemy? One could say that he just didn’t care about God after he blamed Him for betraying Joan of Arc. According to Rais himself, he said that the evil inside of him came from how he was born under a certain constellation and that nobody could ever understand the evil that he did.22 Several people in recent studies have proposed several theories as to what Rais’ motivations were. These theories range from Rais having an identity crisis, which led him to commit violence to ‘affirm his being,’ to him suffering from schizophrenia.23 Just like his supposed redemption, the question of what exactly motivated Rais to commit these heinous crimes remains unsolved.

In a way, Gilles de Rais was a tragic hero: one who had been raised to be well-respected and to achieve high status among the people in France to ultimately become a sadistic killer—one who’s lust for children and gold consumed his mind. Although Rais has been largely forgotten, his actions have inspired the folktale legend of Bluebeard, and is believed to have been the inspiration of Bram Stoker’s Dracula novel in 1897.24