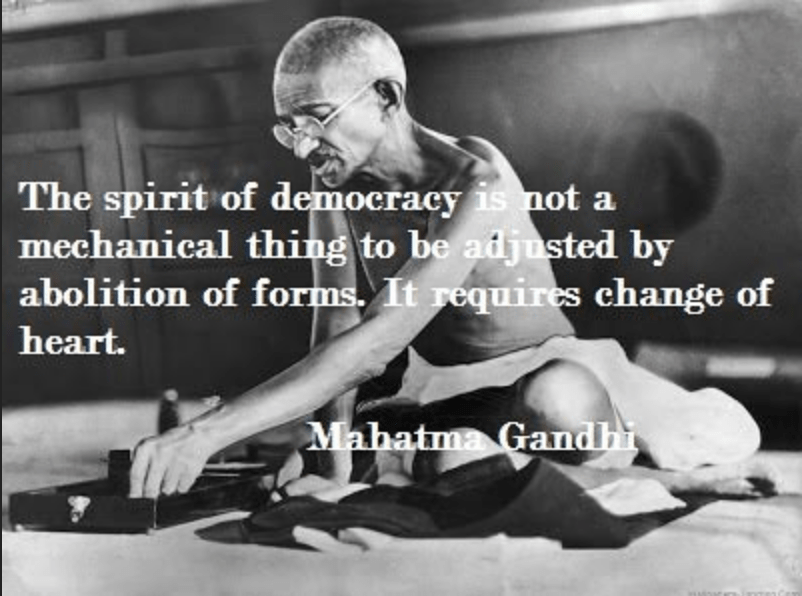 One cold winter night in May 1893, a train screeched to a halt in a station. A swarm of passengers boarded the engine on a journey to Pretoria, South Africa; among the crowd was a young and eager lawyer with a first class ticket. He sat in the seat designated by the voucher he held in his hand. Upon departure, the young lawyer’s darker complexion caught the attention of a white passenger. The white man objected that a ‘colored’ man was allowed to sit in first class, on what was then, a segregated train. When questioned regarding the seat, the lawyer provided his voucher and identification to confirm he was in the proper place. Nevertheless, the comptroller physically removed the young Indian lawyer from the compartment and abandoned him in Pietermaritzburg.1 The young man was left out in the chilly winter night, but this act of racism ignited a flame deep within the freezing body of young lawyer, Mahatma Gandhi. He made the conscious decision to stay in South Africa, and combat racial discrimination in what would be his first fight for human rights.

At the turn of the twentieth century, South Africa was engulfed in a war between Boers and Brits, sparked by the conflict between British imperial interests and local Boer nationalism (from descendants of Dutch settlers).2 Boers are decendants of the Dutch that reside in South Africa.3 Gandhi saw, the Second Boer War, as it is often commonly referred to, as an opportunity to pledge allegiance to the Empire; he organized a group of African born Indians as stretcher-bearers to aid fallen British troops in the war zone. Gandhi aspired to gain equality for Indians within the South African society as British subjects, a limited integration into a white society.4 The violent conflict between the Boers and Brits led to the signing of the Treaty of Vereeniging in 1902. The peace treaty settled the affairs between the South African Republic and the Orange Free State on one side and the United Kingdom on the other.5 However, this did not change racially discriminatory practices in the whole region.

Even worse, in July 1907, the South African government passed an ordinance called the Black Act.This required Indians to be fingerprinted, registered, and to carry identification cards at all times, and failure to do so was punishable by prison, heavy fines, or deportation.6 By this time, Gandhi had realized his overreaching life goal of saradaya which means the “welfare of all” and or “to lift of all”. The Indian terms describing these principles are satya (truth), ahimsa (nonviolence), and tapasya, (selfsuffering).7 Gandhi used this idea in response to the Black Act. He and other members of the satyagraha (truth and nonviolent disobedience) movement picketed outside of the registration offices; these actions led to the arrest of the leaders of the movement.8 This was Gandhi’s first arrest for disobedience; he was sentenced on January 10, 1908, to two months of simple imprisonment.9 This was the first of six arrests in South Africa; three of with involving failure to produce registration.10

Throughout his time in South Africa, Gandhi worked tirelessly to improve the rights of immigrant Indians like him. This is where he developed and practiced his creed of passive resistance.11 His efforts paved the way for a change in policy. In fact, the Gandhian influence dominated freedom struggles on the African continent right up to the 1960s because of the power it generated and the unity it forged among the usually powerless. Nonviolence was the official stance of all major African coalitions, and the South African African National Congress (ANC) remained implacably opposed to violence for most of its existence.12 South Africa because of apartheid was placed on the agenda of the United Nations for the first time in 1946 by India regarding the treatment of people of Indian origin living in South Africa.13 South Africa’s apartheid policies clearly violated provisions of the U.N. Charter and human rights instruments adopted pursuant to it.14. Apartheid has also negatively impacted relations between the Republic of South Africa and India because of the subordinate status of people of Indian decent in South Africa.15 The General Assembly highlighted the deficit of the Universal Declaration of Human Rights in the apartheid policy within South Africa. Thanks to the work of Gandhi and satyagraha, the world took notice of inequalities caused by South African discriminatory policies.

South Africa was the land of the unfortunate encounter with institutional racism for Mahatma Gandhi. He found and established values in which he could fight against racial discrimination and civil rights violations for the rest of his life. Gandhi sated, “during ten years, that is, until 1914, excepting the intervals of my enforced rest in prison, there was hardly an issue of Indian Opinion without an article from me… the journal became for me a training in self-restraint, and for friends a medium to keep in touch with my thoughts.”16 He spent ten years living in South Africa, fighting for human rights, and writing about his journey for the Indian Opinion, an experience and self reflection triggered by the discrimination Indians faced in South Africa. He used adversity to shape his determination and mindset and framework of nonviolence for his future endeavors including India’s independence from the United Kingdom.

I learned about Gandhi years ago now, but I was not aware of the fact that he was a lawyer, and I also did not know what had made him want to fight for human rights before this article, but I now do. It is upsetting that he was physically removed from the train even though he clearly had his voucher and identification to confirm he was in the proper place. That part of this article really captured my attention and made me think about what he might have felt in that moment. Great article! I admire Gandhi so much for all that he did, and I will always be inspired by him.

I loved this article. I have always admired Gandhi for his determination and commitment to fight for freedom and human rights. I think that his passion for justice is very noticeable, which is why he decided to become a lawyer. I love the fact that nothing stopped him from achieving his goals. Even when things seemed complicated for him, he remained resilient and courageous to continue his purpose to bring independence to India. I also admire the fact that he always saw non-violent protesting as the most effective and purposeful way to make a change against any issue or situation.

This article was truly informative. The actions that Gandhi undertook here are to be expected from him, but since this is not a widely known story it was very fascinating reading this story. Now knowing what started Gandhi on his fight for universal rights, I feel as though I have a deeper understanding of the rest of his works and actions in his later life.

Nice article! I learned about Gandhi in a social justice class a couple of years ago. He truly was a resilient and admirable man. I found it inspiring how Gandhi didn’t let anything get in his way and kept on working towards his goal. Overall, this was well researched and well-written article on a truly inspirational historical figure. Great job!

Mahatma Gandhi was the leader of India’s non-violent independence movement against British rule and in South Africa who advocated for the civil rights of Indians. Born in Porbandar, India, Gandhi studied law and organized boycotts against British institutions in peaceful forms of civil disobedience. Gandhi summed up his philosophy of life with the words, “My Life is my Message”. His multifarious and dynamic personality was based on truth and nothing but the truth. Non – violence was another intrinsic element of this philosophy.

I really enjoyed this article. I thought it was well structured and well written. I found this article interesting since I know who Gandhi is but still learned a lot about him from this article. I liked learning about what made him involved in human rights and the fact that he was a lawyer. His fight against discrimination and rights is inspiring and his passion and commitment paid off. Gandhi is a great example of someone who fights for what he believes and will not take injustice or discrimination from anyone. Overall, this article was very informative, I really enjoyed it.

This was an amazing article! This article covered a lot of the South African politics history and fight against discrimination that I was not aware of. I enjoyed reading the early history of Gandhi and his very own struggles with racism that inspired him to become the leader he was. I admire Gandhi and all his work towards a better world. This article was very well written.

The practice of inequality in South Africa is one of upmost horror and is something I hope never happens again. Without people such as Nelson Mandela and Ghandi we really would not have had the racial liberation that we saw in places such as south Africa and India from the British empire. I really enjoy learning about these things as it goes on to show how the Geo political situations evolved in these nations today.

I feel like everyone has heard of Gandhi and his work with human rights but not many know much about his story or what ignited the spark for him to follow the path he took to advocate for the latter. This article is so detailed into why Gandhi became Gandhi and portrays the motivation and methods he had to advocate for human rights.

I have never known that Gandhi started his work for civil rights in South Africa of all places. This article was well written and a good story about a time in Gandhi’s life we never hear about. I wonder if the UN charter on civil rights ever passed a conclusion against the US during the 60s, although seeing as how the US was one of the founding members, I highly doubt it.