HemisFair 1968: A Confluence of Civilizations in the Americas 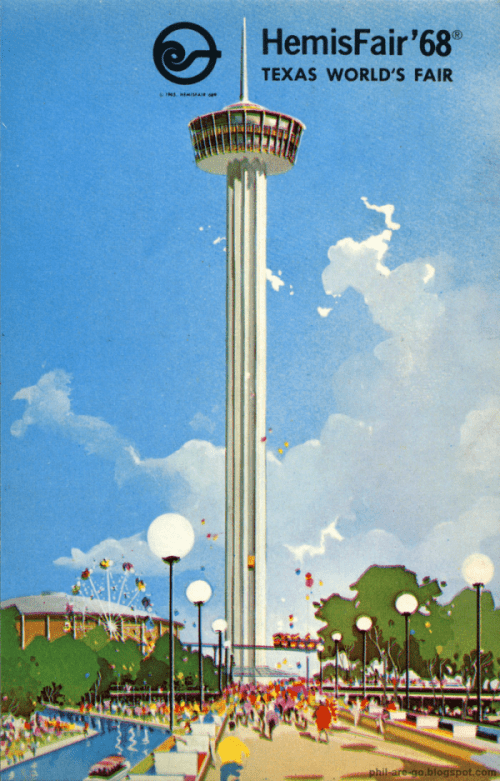 The Space Needle in downtown Seattle,1 the Unisphere in the heart of New York City,2 the Eiffel Tower in bustling Paris, France3 — these are but a couple examples of the monuments left behind by the presence of a world’s fair. By the same token, it was the 1968 World’s Fair, held in San Antonio, Texas, that prompted the creation of the famed Tower of the Americas. Since its inception, the city of San Antonio has always represented a junction of many different cultures. Within the city limits, the people of San Antonio have experienced a plethora of struggles, victories, and losses. Determined to share the city’s unique trials and tribulations with the world, a man named Jerome K. Harris proposed that a world’s fair be held to celebrate the 250th anniversary of San Antonio’s establishment.4

Harris was no stranger to the idea of money and power, but he could not push forward such a large-scale event without the help of some other notable businessmen and policymakers from San Antonio. Accordingly, he searched long and far for a group of distinguished members of the San Antonio community who he believed could help him achieve his end goal. After only a few months, Harris had put together a group of well known individuals, including William R. Sinkin, H. B. “Pat” Zachry, James Gaines, and Henry B. Gonzales, to name a few. Thanks to a combination of San Antonio underwriters, voter-approved city bonds, Urban Renewal agency funds, and the Texas State Legislature, the group was eventually able to raise $11,375,000 towards the project. Although the group had done a great job raising funding for the event, it was actually the international community that allowed Hemisfair to reach a grand total of $156,000,000. This grand-scale event would ultimately spawn many different buildings, including the Convention Center and Arena, the Institute of Texan Cultures, the John H. Wood Federal Courthouse and, of course, the aforementioned Tower of the Americas.5

With the funding secured, the group turned its attention to planning the event that would, unbeknownst to them, eventually cement San Antonio as the top tourist destination in Texas. In order to plan such a large-scale event like this one, the group found itself catering to many different international interests. Finally, after months of hard work and intensive planning, the Paris-based Bureau of International Expositions awarded the city of San Antonio with official fair status in November 1965, thus recognizing the first world’s fair not only in the state of Texas but in the whole southern half of the United States.6

On April 6, 1968, San Antonio locals and visitors alike awoke to a perfect 65-degree morning. The weather made for a perfect day to make history. As the many visitors stepped onto the 96.2-acre fairground on the southeastern edge of downtown San Antonio, the first thing they noticed was the almost endless amount of colorful tents set up for vendors of food, games, and education. Approximately twenty government agencies and ten private corporations from around the world participated and sponsored their own entertainment and education pavilions in order to convey the theme of “A Confluence of Cultures.” HemisFair would continue for six months, finally coming to an end on October 6, 1968. Within these six months, more than six million people of varying nationality and culture would attend the fair. In total, the fair boasted representation for a total of thirty different nations.7 In this regard, HemisFair was truly a confluence of cultures, a bastion of the idea of diversity that still resides in San Antonio today.

Tower of the Americas

Prior to reading this article, I didn’t know that San Antonio had hosted a World’s Fair in 1968. The Tower of the Americas adds to San Antonio’s culture and skyline. I think it is amazing how the people got together to raise money to have this project added to the diversity of the city and how this event also brought various other projects to the city.

Ever since moving here, San Antonio has held a special place in my heart. I would have loved to visit this point in time if that were possible. It seems like it was San Antonio at its peak. Until last year I was unaware that San Antonio had hosted a World Fair so its great to see this article that will help inform people and let them know of the effort involved to make it a reality.

Loved the article! The Tower of the Americas is the symbol of unity and diversity with its 6 million people in those 6 months alone. Today, it might not mean a lot to many people and maybe some Texans do not hold a lot of pride every time they go dine, drive or walk by the tower, but it should always be a symbol of inclusion of all nationalities, languages and cultures. It is not only a Texas pride but a San Antonio pride.

Nice article. I am San Antonio native, and it is nice to know some of the history behind hemisphere park. It is so cool to read that San Antonio was such a must see town back in 1968 and that millions of people visited the town in those allotted six months for the fair. I have never thought of San Antonio as much of a tourist destination but I guess to others it must seem like quite an extraordinary city. Especially if the world fair is being held.

I enjoyed reading this article. I’m glad to read something that I haven’t known before, especially of something that is special and historical in my home city. The Tower of the Americas is one of San Antonio’s most visited places by tourists. This is truly a beautiful building and I’m glad the HemisFair of 1968 was held in this particular place.

I’m from the Rio Grande Valley – definitely not a San Antonio local – but I made plenty of trips here with my family all throughout my childhood/teenage years and for as long as I can remember, I’ve always referred to the Tower of Americas as, simply, “the cupcake.” So this article was a very interesting read to me in that I finally know the history behind that monument that shaped so much of my childhood.

Having a major structural landmark in my city gives me pride for being from San Antonio. Its something anyone can look at and say “wow what a beautiful thing” and represents the graceful and triumphant ways for the people of San Antonio. And out of all years it was constructed at a time where numerous important world events were happening. Today with the tower being 51 years old it is now historic, symbolic, and in my opinion a great thing to represent my home.

I remember when I was five years old, my kindergarten class went on a field trip to the Tower of the Americas, and I remember we had lunch there, I was so amazed by the pageantry of it all. This article was very well written and I really enjoyed the attention to the details that I as a native of San Antonio was not privy to. The author did a fantastic job of laying the groundwork for the background without over saturating the entire piece.

Wow, I have lived in San Antonio for about a year and a half and even visited the tower of americas but I had never looked into the history of the HemisFair itself. I think it is such an admirable thing to do to want to have a celebration of what makes America the great nation that it is, the fact that we are made up of so many ethnicities, cultures and peoples is beautiful. I am so proud of San Antonio for having placed an emphasis on what it is that brings us together as a community as opposed to wanting to use differences to tear apart, and the tower of americas is an amazing representation of that.

I am not originally from San Antonio, but the first thing I did when moving here was go to the HemisFair. Never had I thought to do research about the history and upcoming of this beautiful tower in this city. It is interesting to learn new things about San Antonio, it is small things like these that make this city so unique.