The Trojan Horse, Friend Or Foe? 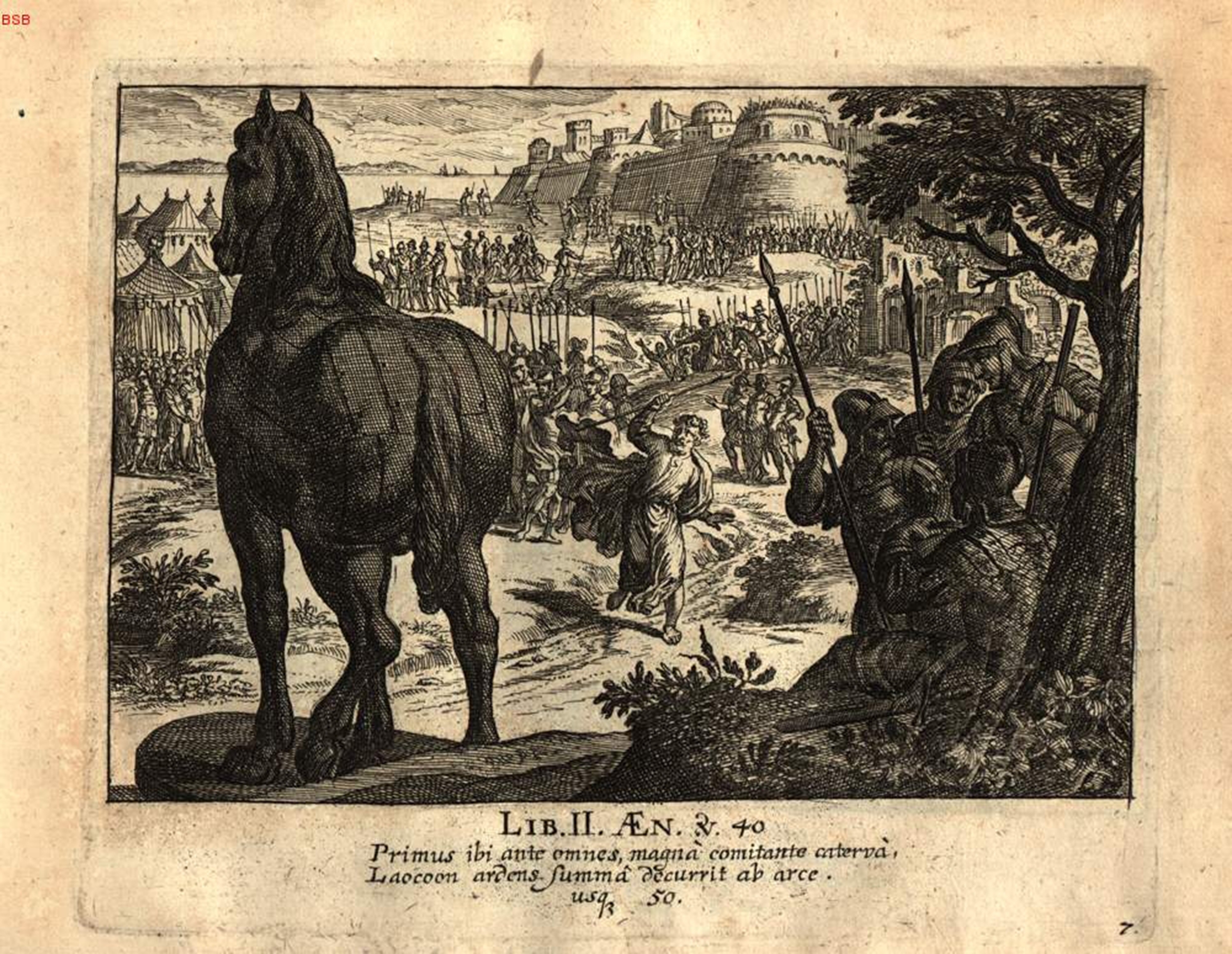 It all started in ancient Greece, when everyone believed in all the great deities. Three goddesses were sitting, relaxing on Mount Olympus when an apple appeared. This is where it starts to get a bit messy. See, the apple was meant for the most beautiful goddess and of course, who wouldn’t want to be called the most beautiful of the goddesses? The three goddesses were Juno, queen of the gods, Minerva, goddess of wisdom and battle, and Venus, goddess of love and beauty. You probably see the predicament here.1

Well, all three goddesses wanted to be the receiver of this title and they decided to ask a mortal, one called Paris, a prince of Troy, to be the judge. After much bribing from each of the three goddesses, Paris finally went for the most appealing deal, which came from Venus. She offered him the most beautiful woman in the world, human, mind you, not goddess, because of course Minerva, in her mind, was the most beautiful of all. The most beautiful woman in the world was named Helen.2 The downside of it all was that Helen was married, and the way Paris got her wasn’t fair at all. And that caused the Trojan War, thank you Paris. After years of war, the Greeks knew that their strength was dwindling, and of course they came up with a plan to once and for all defeat the Trojans. This is where the end begins.3

The Greeks began building a horse made of timber, as tall as a hill with its ribs sheathed with plankings of cut pine, an impressive sight that was planned, or so they say, to be offered to the sea in order to achieve a safe return.4

But the real reason for the horse was to hide a number of Greek soldiers inside the horse’s hollow belly, and then give the horse to the Trojans as a gift without them noticing the soldiers inside. Once the horse was finished and ready to play its part, the Greeks left it behind on the grounds near the Dorian campsite, while they sped away on their ships and went into hiding behind a nearby island, waiting for the Trojans to take the horse into their city.5 A wooden horse as tall as a hill is very hard to miss, making the Trojans marvel at its grandeur.

When the Trojans discovered the wooden horse the next morning, there was debate on whether to bring the horse into the city or not. One Trojan named Thymoetes shouted yes, while another named Laocoön did not hesitate to attack the horse’s belly.6 If it weren’t for the gods’ sinister ways, or if they themselves weren’t crazed with pride, the Argive den wouldn’t have made them fools, and with a bloody piece of steel, Troy would still be standing.7 And since they didn’t notice any of that, the Trojans debated whether or not to haul the enormous horse inside and bestowed it upon their king.

Just then, an unknown Greek had been discovered. Trojans all around ran to see who it was. This unknown man was an abandoned outcast from the Greeks. With his voice full of misery, the Trojans felt sorry for him and let him speak about his woes.8 This man named Sinon went on to explain where he came from and what had happened with the Danaans. He convinced the Trojans he was innocent, and they accepted his words and continued questioning him. One of the questions was what the horse meant and why it was left behind. The horse was a figure of reparation for what the Greeks had done to one of Minerva’s temples.9 And with this, the Trojans let Sinon live.

Alas, tragedy was meant to strike the Trojans, for in that same day, Laocoön, the man who stabbed the horse, was attacked. Twin snakes came from the sea onto dry land all the way to Laocoön and his two sons. Once there, the snakes began squeezing Laocoön and his sons to death, finishing them off, for that was the curse of Minerva, the patron goddess of the hulk he stabbed.10

Night time finally came and with it the Greeks began to return to the gates of Troy. Who would have known that Sinon, the outcast of the Danaan, was a traitor all along, faking his grief and fear to gain the Trojans’ trust. Once all everyone went to their homes for the night, the Greeks started the last step of their plan to win. The soldiers got out from the horse then opened the gates and let the returning Greeks in. With them came fires all across the town with no one to stop them. The sack of Troy had begun and it met its doom that night.11 The Trojans were no more. They had lost everything. The survivors had to flee their city or face the consequence of death or slavery. And this is how Troy fell at the hands of a wooden horse. Laocoön was right in warning his people to beware of the Greeks, even when they are giving you gifts!

The Fall of Troy

The Trojan War is one of history’s most famous examples of human emotion being used to bring about conflict. Using love as a means of political control and expanding nations is a testament to man’s idea of structure being thwarted by innate desires. The horse itself is used as a symbol of deceit that goes along with the idea of love and being too trusting of your fellow man.

I loved the sarcastic humor that the writer used for her article, which was interesting because no other article that I have read in this website has used that style of writing. The story of the Trojan Horse is quite interesting to read and learn about Greek history and culture as well. Unluckily, Troy lost the war between Sparta after receiving the “gift”.

I really enjoy reading this article and one of the main reasons for that is how the writer went took the time to make it sound like it was Paris’s fault (which it was). When I was learning about this story my instructor made the same remark’s that the whole reason that this war happened was because of Paris. Another thing I love about this story is how creative the Greeks were into tricking the Trojans by hiding inside of a wooden horse. Every time that horse gets brought up I just think about “the best way to hide something is in plain sight” , in this case a giant wooden horse.

This story is a testament to the importance of viewing things from different and anticipating a variety of outcomes as a lack of awareness was the downfall of Troy. However, the Trojans didn’t fall due to their ignorance, they fell due to the genius planning of the Greeks. The entire plan was a masterpiece that you just tip your cap to. The performance of Sinon was masterful and really sealed the deal.

I’ve read about the Trojan Horse but it was with the goddesses’ s Greek counterparts, which is Juno as Hera, Minerva as Athena and Venus as Aphrodite. The question I’ve been wondering is why would Paris chose to have the most beautiful woman instead of wisdom or fame but nonetheless it makes the story more intriguing to read. Also love the sarcastic writing style that further increases a person’s interest in reading the article.

This is an infamous story and I was surprised that there was more to it. I originally thought that the story just followed the basic story line: soldiers hide in the horse, the horse is put in the city, they come out of the horse at night and kill everyone. For some reason I did not know that it was tied to mythology, I knew that it was an old story, but I did not know that it was old enough to be mythology. It is kind of funny to think that the whole war starts from a competition among gods and a single woman. Fantastic article!

Tales of Greek mythology often include the Trojan War, not because the war was a myth, but because of the supernatural help bestowed upon the Greeks. The author took the time to research differing perspectives of conquest and included information that is not always included, such as the death of Laocoon and his sons. The author focused on providing accurate background information describing the reason for the war and continued in a succinct manner to describe the war in its totality.

Such a well written article! Very interesting and informative. I have obviously heard of the story of the Trojan Horse prior, however I did not know that much. This article really portrayed certain aspects of the story that is not always told. Really went into the myth behind it, the politics, and the actual instance of the attack itself. So great! Good job, thoroughly enjoyed reading your article.

This article was a very interesting read. I did not know much about the Trojan horse, however it was interesting that the Trojans stomach held men in there to hide. The author did a very good job at mentioning how it started and did a good job at providing details. You can really tell they did their research in order to get the story right.