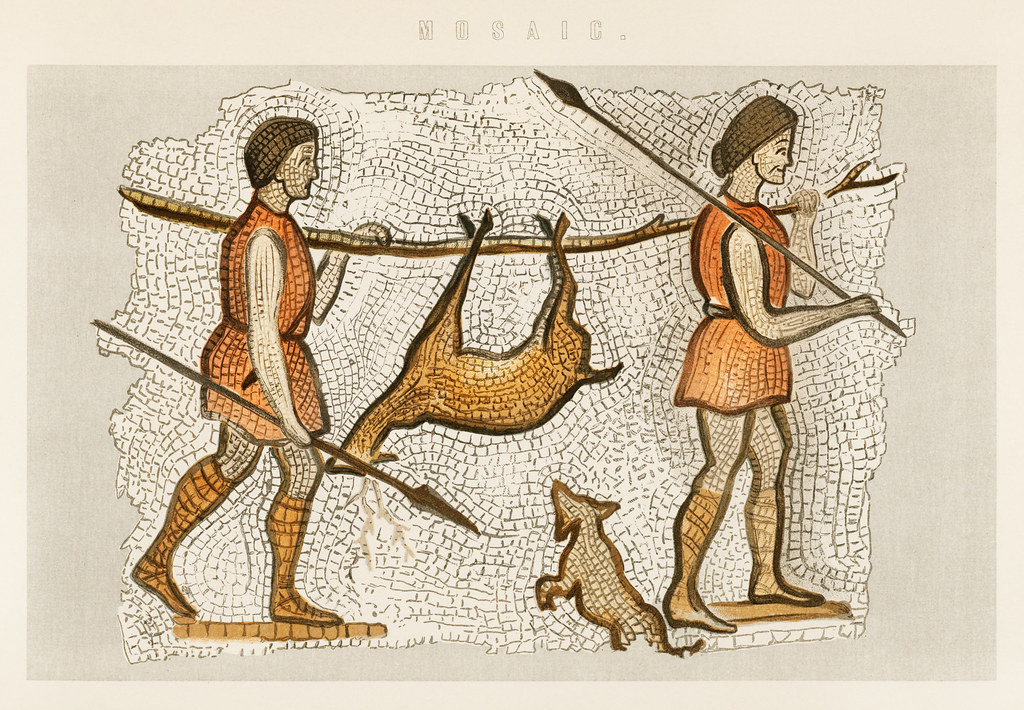 In the late paleolithic era, men and women chose their respective social roles as hunters and gatherers, but scholars today are not agreed on why they did so, or even whether the “men-as-hunters hypothesis” is even accurate. Why did men tend to be hunters and women gatherers? Did they choose these roles due to men just being stronger and women less so? These roles most likely stem from a variety of different complex evolutionary changes over the millennia that have enabled men and women to adopt these roles, making it easier for them to decide what was the most obvious and efficient uses of their abilities. There are many possible explanations for what their role selection was. Research done by Randall Haas has found burials of female hunters with their weapons for hunting, suggesting that the “man-the-hunter” thesis may oversimplify who fit what social roles among hunters and gatherers.1 Some scholars address this question of gendering roles among the hunters and gatherers through a gender-biased perception of the world. Margaret W. Conkey and Janet D. Spector believe that the main reason for the “man-the-hunter hypothesis” was archaeologists wanting to believe in the gender separate roles due to their own patriarchal assumptions projected onto the objects of their research, namely hunter and gatherer societies.2 While both views offer us a glimpse into this complex historical debate, I argue that their claims forget important biological explanations for the choice of social roles within hunter-gatherer societies. Rather than being homogeneous and vague, my argument below details why men could have preferred being a hunter, and women preferred being gatherers.

Hunters and gatherers have always been gender stereotyped with the hunters being men by virtue of their strength, and the gatherers being women by virtue of them being child caretakers. This perception of men being naturally stronger has faced challenges in recent times, leading the general public to wonder about men and women having biological differences regarding muscle growth and strength. Let us start with what we do know from biological experiments, the actual difference in strength in gender. A study made by Trevino et al. gathered 20 people, 10 men and 10 women, in order to study their motor unit activation potential when doing isometric exercises with the trapezoid muscle. These exercises included a torque at a 40% maximal voluntary contraction of the muscles. As the experiment went on and each of the participants did their exercises, electromyographic techniques were used to measure the motor unit action potential units (MUAP’s) in terms of AMPS and in relation to the recruitment threshold of them respectively. This is a very technical way of saying that they measured how much muscle was recruited during an isometric exercise. The results of the test stated that men had a higher MUAP vs RT slope than women did on average, with men having a 0.82±0.09 and women a 0.77±0.07.3

In the previous experiment, a general approach was taken in order to review overall muscle recruitment and density. Besides muscle recruitment and efficiency of use, there is also a measurable distinction of lean tissue between both men and women. While both genders are very similar in levels of physical fitness, men possess a higher level of lean tissue. On average, men have a higher lean body mass of 56.4±1.6kg, and women have 40.1±1.3kg. However, an interesting find of this study is how their physical strength correlates, since both men and women in this study live a similar lifestyle. Their knee extension strength was fairly similar, and this may be due to the fact that men have a higher strength potential and muscle activation.4 From this data, you can tell that men and women have very similar physical fitness and can even have the same or similar strength levels, if their lives are similar enough. However, men can have a much higher motor unit recruitment and especially a much higher lean tissue muscle weight. This would’ve been a huge advantage for men in hunter-gatherer societies, as men needed a higher index of strength in order to actually thrust a spear into a beast, not to mention being able to carry the kill all the way back home. Not only did men have to be strong, but they had to be accurate as well. According to a study referenced by Chrisler conducted in 1989, men tend to be better at accuracy, specifically while throwing with the right hand. This enabled them to have an advantage at hunting, since they would have to try less times, and would be able to hit much harder.5

While you’re out and about hunting, it always is extremely important to be able to find your way back home, and that is one of the last few key biological advantages that men physically have over women regarding hunting. Men are better at mental rotation, which is the study of how the rotation of something changes its appearance. Men do this better by nature, which is extremely important while on the hunt. Visualizing the target, calculating how it will change around its environment, and being able to track it down is by biological nature an advantage that men have over women.6

I do not argue that men only have advantages. In fact, men and women are much more similar than we think. The main similarity overall would easily be in the cognitive domain. A myriad of studies have been done regarding how much of a difference exists regarding men and women in intellectual play such as in mathematics. A study done in 1974 regarding the mathematic abilities of men and women in between ages of 12 to 15 concluded that there was no significant difference in their cognitive abilities until the age of 13 or 15, and even then their sex would be an extremely insignificant aspect of the difference between intelligence.7 This would essentially mean that both sexes have the same capacity of formulating an increasingly complicated plan to survive efficiently for millennia. With both sexes being equally as valuable regarding planning and strategy, it makes sense that they would have developed a relatively egalitarian society.

In one area, women have major advantages when it comes to their role as gatherers, especially in the sense of efficiency regarding the tasks that it entails. According to various studies as referenced in the handbook of gender research by Joan C. Chrisler and Donald R. McCreary, women are better intrinsically at rapidly selecting and identifying items, called perceptual speed. Women also excel at quickly identifying the shape and color of an object.8 This is one of the most important abilities that women had in the paleolithic period, since there could have been days where hunting just didn’t yield any results. Therefore, a constant and efficient way of gathering resources is necessary. This is why an efficient way of identifying food is of such importance. Without these abilities, the identification of correct food sources could be fatal. Whenever women found a place of plentiful resources, they would need a way of actually remembering where the resources were. Women also excel at that too. They have better spatial memory, which in turn helps them remember exactly where sustenance can be found and collected.9

Men and women are clearly evolutionarily evolved for their own specialized tasks. Men have evolved for the art of the hunt, having increased strength and increased accuracy for hunting, and manning down the dinner of that night, possessing increased navigational skills so as to get farther away, and return safely and most importantly, efficiently. Women evolved for meticulously remembering the details (including perceptional speed, spatial memorization, and color differentiation) that make the difference when it comes to edible and poisonous foods, while memorizing exactly where it is and how to find it. This is why generally men and women were hunters and gatherers respectively. This however doesn’t mean they were always that way, especially seeing how efficiency exclusive to one sex in a specific area doesn’t always account for all of human evolution. There are some excavations in America that signify an increasing participation of female hunting, their participation ranging in the percentages of 30% to 50%, which is somewhat surprising; however, it still demonstrates how biology is not determinative in terms of traits that specialize in the specialization of tasks.10

Great job on your nomination with your article. It was very well written and I loved all of the detail. I did not know that hunters and gatherers had practically altered our evolution. I don’t like how people are trying to separate men and women from each other regarding to who can do things better; I think both genders need each other equally. This article touched base on how those gender norms weren’t relevant back then.

Cheers on your publishing; you did an excellent job overall! I knew nothing about this topic prior to reading this article. Therefore, learning more about their culture was incredibly enjoyable. I absolutely liked how interesting your writing was. This is something I would never have thought to question, therefore I find it extremely interesting that it is a matter of conversation.

I remember learning about hunters and gatherers in high school, and they heavily emphasized the gender roles that took place during those times, and I really enjoyed your article and how extensive you were about describing the evolution of those gender roles and how they have become more versatile. Overall this article refreshed my memory and gave me a better extensive understanding of hunters and gatherers.

Very interesting article and congratulation on your nomination. It was well-written and liked the way it was told. I did not have any previous knowledge about the hunter and gathers other than what they are. It was definitely gender-based and very biased towards men being the sole hunter. Its evolution continues in hopes of a better future. Overall great article!

First of all I want to say congratulations on your article being nominated for an award. I really enjoyed reading your article. I learned more about hunters and gatherers than I did being taught in highschool. I completely agree with you on hunters and gatherers being stereotyped. Women were definitely capable of doing the things the men would do. I also think that the men wouldn’t be able to take on the challenge of being gatherers.

Interesting topic for an interesting article. I definitely remember learning about hunters and gatherers societies, but I don’t think I’ve ever seen someone approach the topic the way you did. It is certainly interesting to consider and think about the biological and physiological differences between men and women. Congrats on your nomination!

Interesting article Marcos. I could easily relate to the hunter part of your article. Being an avid hunter, I know about hunting animals to provide food for my family during the hunting season. I enjoyed reading your article. Congratulations on your nomination.

This makes a lot of sense. However, a man like me in the paleolithic era would be able to do nothing but gather. All jokes aside its crazy to think that we still have traits from our pre-historic ancestors. Not only physical but internal like the way women can identify shapes and colors quicker. Also, this article was correctly cited and used relevant pictures which are a plus. Great read.

It is very interesting that evolution plays a big role in this argument about men and women being hunters and gatherers. I like that you included scientific research and data results to prove the outcomes of experiments done to prove or debunk this argument. It makes sense that both genders evolved to do what they did most, and if the roles were switched, the data from men and women would have been different.