Into the Comic World: Superman and American Anxieties in the Great Depression 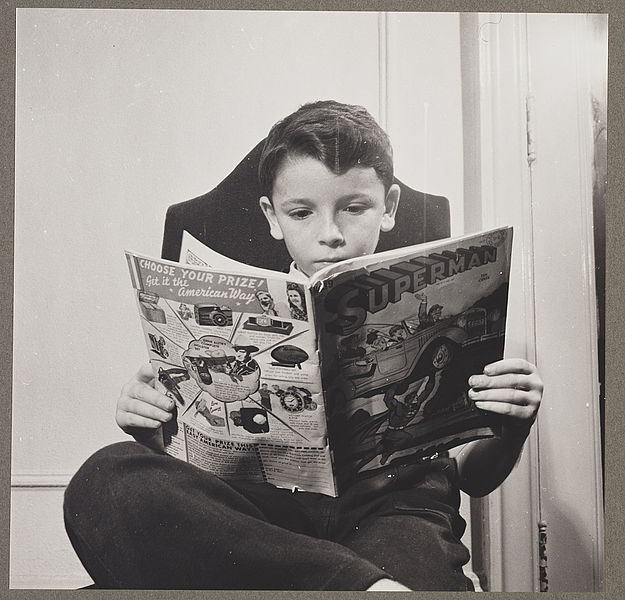 During the Great Depression and World War II, most Americans wanted to find happiness in anything. Throughout this era, there were not many places people could find happiness; so they began looking for entertainment in books. However, these were not just any ordinary types of books; they were indeed comic books.

Malcolm Wheeler-Nicholson was the founder of the first comic magazine, which was called New Fun. Although his comic did poorly, Malcolm was able to create a company called Detective Comics. The company was able to create a new magazine called Action Comics, founded in 1937.1 But before Malcolm was able to publish the new magazine, he fell into bankruptcy. Disregarding his personal setback, the company carried on without his involvement. The first issue in Action Comic was published in 1938. The comic consisted of an abnormal man who had incredible strength and wore a skintight suit, commonly known as Superman. In the span of a year, Superman had received his own book title and sold over 1.2 million copies per issue. It later became a radio show in 1940, opening with the phrase “It’s a bird! It’s a plane! No, it’s…Superman!”2 Eventually other publishers began developing their own superheroes as well. The second comic, which was produced in 1939, is the now popularly known comic series Marvel Comics. By 1940’s Superman was joined by other heroes such as: the Human Torch, the Sub-Mariner, Batman, the Flash, and Wonder Woman.3 In fact, Wonder Woman was meant to represent the importance of women in the war effort. During the boom of new superheroes being created, Superman was still the most popular of them all.

Unfortunately the comic industry was attacked by educators, psychiatrists, journalist, and even the federal government.  They believed comics had no beneficial outcomes for society; instead of bringing entertainment, they were promoting ideas of violence and crime. They also believed that not only did the comics bring harmful thoughts to young minds, but the thin paper was supposedly destroying their eyesight.4 Despite the numerous complaints, Congress took no legal action against the publishers of the books. With this incident, it helped create a trade system, known as the Comic Codes, to help prevent indecency in the industry.5

No one could have guessed that comic books would have created some issues for years to come. For example, various art teachers discovered that the students who disliked and were performing poorly in art class, were the same students who had an interest in comic books; they were often getting into trouble for sketching comics instead of paying attention.6 The students wanted to get away from reality and what better way to do so than by creating your own story-line in a comic book?

That is the whole reason comic books were created, to help distract people from the tough times they were experiencing in life. That is why most people enjoyed them, because they wanted to escape reality by reading about situations that could never happen in real life, by flooding the minds of people of all ages with imagination. It is not hard to see why Americans would be very entertained by the concept of superheroes; they were created to help prevent disasters and to comfort those who were frightened by real-world events. For that reason this era was the perfect time for comic books to emerge. Some people were opposed to them, but in general they helped society in several ways. Although comics may not be as popular as they once were, it gave Americans a new world to discover, even if it was just imaginary.

This was a great article. It was very interesting and informative. I didn’t know that the Great Depression had such a profound effect on the birth of comic books. After reading this, it now makes sense why comic books would’ve been so popular and powerful during this period in the history of America. The article included many interesting facts about the origins of superheroes, and they were very insightful.

A great article! Congratulations on the award, a well deserve award! I really enjoyed the article it was not too long nor too short but it contained lots of important and interesting information. I remember reading many of superhero comics and I would truly enjoyed every single comic that I read. Reading the comics helped me escape from all the things going on and picture all the action through the readings.

Amanda Cantu did an exquisite job correlating the introduction of comic books in America to a troubled American society. Comic books have indeed created an escape from reality (which is a positive thing for the most part), and this article tells the viewer that that and adding subtle social commentary is the groundwork for the huge empire the industry is today. Though not necessarily by the more conservative citizens of then-America, I was surprised that the Federal Government saw the likes of Superman and Wonder Woman as the danger to society rather than as the fictitious inspirations they are to everyone today. Either way, it was a fun and informative read.

I personally love comics, even though I haven’t had the chance to read that many. The Marvel world and DC world are where I live, watching or reading about those superheroes is just so riveting. I mean, reading this article and finding out that Wonder Woman was meant to represent the importance of women in the war effort is shocking. I mean she was portrayed as this amazing soldier, an amazonian woman, but I wouldn’t have guessed that her actual portrayal was of the woman in the war. And to think that comic books created some issues for years to come is just wrong. I mean reading those words in the article felt so wrong, because how would comic books create issues? They were literally created to help distract people from everything that they were experiencing in life that was hard on them.

This was such a great article. It was short but contained great information. It did a great job of explaining the origin of comics and their relation to the Great Depression era. I find it really interesting how these comics were used as a distraction for people in such a hard time. I think it’s really awesome how something as small as a comic can help someone get through a tough time.

I really loved reading this article. Though it was short and brief, it really gave me an insight on how the comic industry helped deal with some mental struggle during a hard time. I grew up liking the Superman comics, so this article really gave me an interest in the article. I was also shocked by how the comic industry got backlash for making comics and I took that insight and compared it to how people view video games in today’s society.

Different article that with a quick read makes you understand what the author wants to transmit. It is striking that in difficult times like the Great Depression, little things like Comics can make people forget for a few moments the hard times they are living, allowing them to have some rest and disconnection from the reality. It is amazing if we analyze the projection that Marvel comics have had in less than a century. Everyone on earth knows at least the name of one Marvel superhero. I think that this article teaches us an important thing; in tough times, sometimes a reading, even if it just comics, can make you see life more positive.

I always found it ironic how psychiatrists were attacking comic books for their effect on society. The other critics I could understand, but experts in mental health should have been the ones most aware that art, superheros, and fictional stories were exactly what people needed during the Great Depression. It wasn’t simply a time of economic turmoil, mental health was plummeting and people needed an escape. People needed inspiration. People needed heroes. If they weren’t gonna get them in real life, fictional ones with super strength, lazer-vision, and an aversion to kryptonite would have to do. I always hated what the Comic Codes did to superhero comics. Their creation is basically what caused the distinction of the Golden Age of comics and the Silver Age. The Codes really cheapened a lot of the characters and story line. Take the Joker from Batman for example. His high-rate crimes that made the stakes high and the readers enraptured in his story were turned into practical jokes and funny business. The Codes were basically comic censorship.

This is an excellent article on how public opinion on comic books has dramatically shifted. In today’s age, comic books are simply another form of media for readers to consume in which they gain both entertainment and a brain stimulant. What many people fail to see is that although comic books might seem simple they truly mirror issues in our government, news and many other forms of organizations. I am glad that articles like this exist to bring awareness of how comics got their “big break”. It was a fun yet informative read.

This offers meaningful insight into how comics have impacted the world and offered joy during a time of great distress. Comics have been used to tell a story of America and its interactions with the world for a long time and have even been used as propaganda. The Captain America comic was supposed to cause a sense of nationalism in the American youth and draw the population together with something lighthearted and fun while conveying a clear message to the youth, America is the good guy. Overall, I thought the article was extremely interesting to read and gave me a lot of new insight into comics.