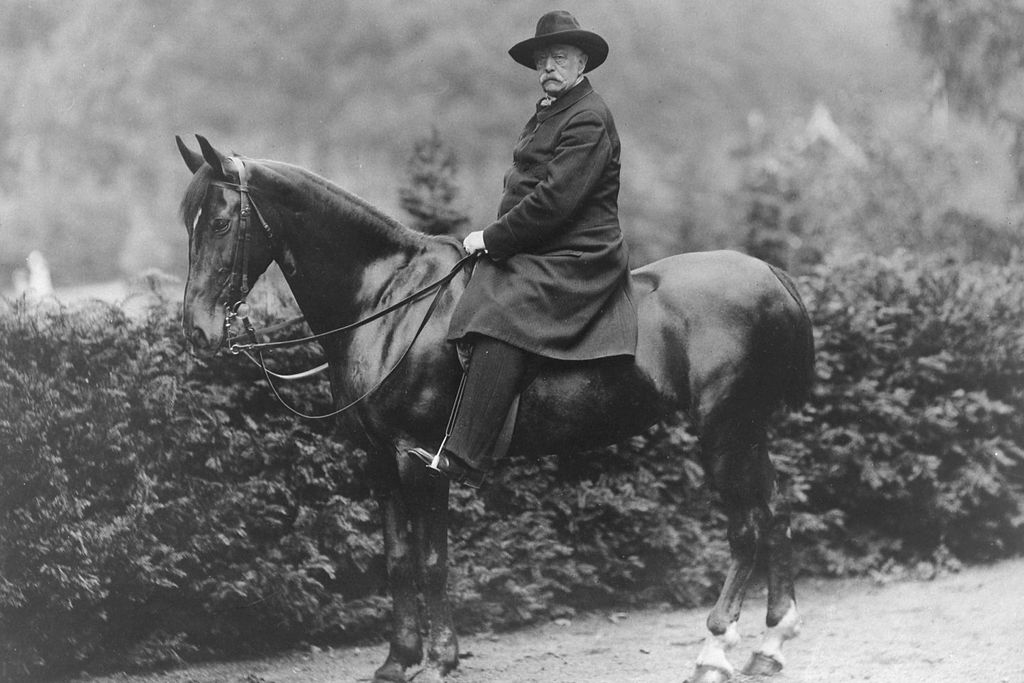 Otto von Bismarck was arguably the most dominant political figure in Europe during the latter half of the nineteenth century. He orchestrated a series of European wars that culminated in the creation of a unified German Empire with himself as the new Chancellor and Prussian King Wilhelm I as Emperor. Under his leadership, the new German Empire quickly became a powerful state whose power rivaled if not arguably exceeded that of France and Great Britain. After establishing a new Empire, Bismarck went on to devote much of his energy to maintaining the peace in Europe through diplomatic means and skillful manipulation. Arguably, aside from Napoleon Bonaparte, no other individual in the nineteenth century was able to impose his or her will upon Europe and leave a legacy that would influence generations to come.

“With a few brusque strokes Bismarck swept away the dilemmas that had baffled the German quest for unity. In the process, he recast the map of Europe and the pattern of international relations.” —Henry A. Kissinger 1

Otto von Bismarck was born on April 1, 1815 in Schönhausen, Prussia. At the time Prussia was one of many German states throughout Central Europe. His father was a former Prussian soldier and Junker, and his mother came from a well-educated family that emphasized Enlightenment thinking. American diplomat and political scientist Henry A. Kissinger wrote that it was from his parents that Bismarck was introduced to “Prussian aristocracy and bureaucracy,” where he would develop a strong sense of loyalty to the Prussian royal family.2 The young Otto received a classical education and later attended university at both Göttingen and Berlin, at the behest of his mother. Unfortunately, Bismarck was a dismal student, often prioritizing socialization and mundane activities over his studies. Bismarck briefly tried a career in civil service, but struggled to adhere to authority. From 1839 to 1847, Bismarck returned to an ordinary life back home and eventually married his wife Johanna von Puttkamer.3

In 1848, Bismarck reentered Prussian politics by making a name for himself during the Prussian Revolution. He was a staunch defender of the Hohenzollern Monarchy that ruled Prussia, and was against the liberal and democratic revolutionaries of that year, who sought to create a unified German Empire, with Frederick Wilhelm IV as its first Emperor. The Prussian King had refused the offer to have him declared Emperor of a united German State by the Frankfurt Parliament, believing rather that only the princes of the German lands could offer their realms to him.4 And it was Bismarck who had urged the Prussian King to reject the Imperial Crown from the Frankfurt Parliament. King Frederick Wilhelm IV had called it a “crown picked up from the gutter.”5 For Bismarck, it would be better for German unity to come through a Prussian display of force and leadership, rather than through a revolution “from below,” which is what he considered the Frankfurt Parliament to be, made up as it was of largely non-aristocratic elements.6

The defeat of the liberal revolutions in Europe allowed Austria to reassert its position as the dominant German state in Europe. Austria was at the center of the German Confederation, which also included Prussia. Henry A. Kissinger wrote that Prussia had “accepted a subordinate role” in the 1850s out of fear that there was more to lose domestically than anything they might gain through force. Bismarck began to see things similarly after spending time serving as Ambassador to the German Confederation, Russia, and France. He began to envision a Prussian-dominated Europe and argued that Austria was an obstacle to Prussian interests.7 Austria would never accept a Prussian hegemony; therefore, for Bismarck, Austria was no longer vital to a unified Germany.8

The appointment of Bismarck as Prussia’s Prime Minister was King Wilhelm’s last attempt at retaining control over the military. The Prussian Diet was threatening not to pass a budget over concerns of military reforms instituted by King Wilhelm. To get past this obstacle Bismarck used a loophole that allowed taxes to be collected based on the old budget. Bismarck argued that this needed to occur, because the government needed to function even if a new budget was not passed and that civil servants deserved compensation for their work and service to the Prussian state.9 Despite considering himself a conservative, Bismarck differed in actual application of policies throughout his political career. In order to gain support from Prussian peasants, artisans, and middle class, Bismarck was willing to concede to liberal policies if it benefited his objectives. In doing so Bismarck was able to gain support from the middle class, which also undermined popular support for socialists and liberals. Most of his political enemies saw Bismarck as antiquated and out of touch with the common folk; however, Bismarck had adapted over the years and had become a master of diplomacy.10

Not long after assuming power, Bismarck began preparations for a new German Empire. He began undermining Austrian influence by politically isolating it from its allies, which was important as Austria depended on its alliances with Prussia and Russia.11 Bismarck manipulated Austria into joining Prussia in the German-Danish War, which resulted in the Germans quickly defeating the Danes. The Prussians gained the region of Schleswig and the Austrians gained Holstein.12

Bismarck’s next target was Austria itself. By stirring up Hungarian nationalism against Austria, he hoped to provoke a war. Once Bismarck was able to determine that Russia would not interfere in the conflict, he established an alliance with Italy and invaded Holstein and, later, Austria in a preemptive strike. Within weeks, Prussia had won the decisive battle at Königgrätz. With Austria, once a dominant power, no longer posing a threat to Prussian interests, Bismarck ended hostilities and Prussia emerged from the war the new dominant German power in Europe.13

After Austria’s defeat, Prussia annexed the German lands of Hanover and Hesse-Kassel. Bismarck, a conservative, was beginning to win support from the liberal Prussian middle class thanks to his goal of German unification, which the middle class supported. The North German Confederation was established in 1867 with Prussia as the de facto leader.14 After failed attempts to unite the German states through diplomacy, Bismarck sought to use war once more. He sought conflict with France and maneuvered diplomatically to assure that neither Russia nor Austria would intervene in a possible conflict between Prussia and France. The emergence of a new Napoleon in France stirred fears in Europe, as many feared another Napoleon would threaten European stability as Napoleon Bonaparte had done previously.15 French Emperor Napoleon III was more than eager to go to war with Prussia, as he saw Prussia as a threat to France’s position as the dominant power in Europe.16

Bismarck, through diplomatic actions, forced France to respond with a declaration of war on July 19, 1870. Napoleon III believed that the French Army would easily defeat the Prussian Army. However, in making France seem as the aggressor in the conflict, the southern German states (Bavaria, Württemberg, and Baden) sided with Prussia, allowing the Germans to have superiority in numbers. Combined with efficient mobilization, the Germans were able to exploit their superiority in numbers against the French by overwhelming them, resulting in many victorious battles. After a decisive defeat in the Battle at Sedan that culminated with the capture of Napoleon III, it seemed inevitable that Bismarck and the Germans would win the war. On September 4, 1870, the French people deposed Napoleon III, ending imperial rule in France, and established the Third French Republic. On January 18, 1871, King Wilhelm I of Prussia was proclaimed German Emperor at the Palace of Versailles, the famous palace that had been the home of previous French kings and French symbol of absolute rule. This time, the crown was being offered to King Wilhelm by his peers, by the kings and princes of the various German lands, unlike the 1848 “crown picked up from the gutter” offered to him by liberal revolutionaries. Despite attempts at resistance, Paris under the administration of the newly formed Third French Republic, surrendered on January 28, 1871. In less than a decade, Bismarck’s three wars ended French hegemony in Europe and created a powerful dominant German Empire in Europe.17

As Chancellor, Bismarck was able to conduct foreign policy mostly uncontested. Bismarck had no imperialist desires to conquer Europe, as Napoleon Bonaparte had in the early nineteenth century. His initial wars were solely for the unification of Germany under Prussian leadership, and now that the objective was complete, much of his attention was focused on maintaining peace in Europe. Most of his concerns were in regard to the unstable situation in the Balkans that could destabilized Europe, and the French who desired revenge. When the Russo-Turkish War of 1877-78 threatened to disrupt peace in Europe, Bismarck called for a peace congress in Berlin and subsequently dominated the meeting, which resulted in peace. Later, Bismarck negotiated defensive alliances with Austria-Hungary and Russia, later known as the Three Emperors League, in 1881. Italy, fearing French aggression, joined Germany and Austria to create the Triple Alliance. Bismarck’s influence over Vienna and St. Petersburg was able to prevent war from emerging in the Balkans, and his alliances denied the French from having allies, which effectively neutralized French ambitions for revenge. Bismarck eventually became renowned for his realpolitik attitude and despised for his authoritarian rule. Until his resignation in 1890, Bismarck was able to maintain peace in Europe, and he came to be known as the “Iron Chancellor,” a name that alluded to his famous speech of “Blood and Iron.”18