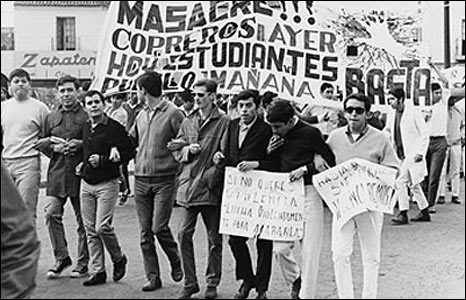 The 1960’s was a decade that will go down in history, from the music to the civil rights movement and the cold war. By far this decade was definitely not a boring one, and the year 1968 was no different, and in many ways some of the most influential events in the 1960’s took place in the year 1968. 1968 is a famous year in history that will never be forgotten. The sheer number of historical events that took place is in abundance, from the assassination of Martin Luther King Jr. on April 4 and that of  Robert F. Kennedy on June 6, to October 11, 1968 and the first Manned Apollo Mission. 1968 is forever a year that will remain fresh in our minds. However, there are events that took place in Mexico during 1968 that are often over looked, and unfortunately somewhat forgotten. During the 1960’s in the United States student-lead protests and movements were common, especially when students noticed injustices, and Mexican students were no different.

Picture a hot summer day in Mexico. All is calm, the country is organizing the hosting of the 1968 Olympics, and all is well in the world. That is until trouble broke out on July 22, 1968. On July 22, two rival high schools broke out into a full on brawl. It remains a mystery today as to what sparked this disagreement that ultimately led to so many unfortunate events. The fighting is rumored to have been between two rival gangs in the city.1 However, this has not been confirmed. The fighting grew with intensity and aggression. The fighting became so intense that the police were called in to restore order. The police who arrived were not the type to let people off with a warning. The police who arrived at the scene were police who act as another branch of the military. The group of officers who arrived at the scene were sent as a form of riot control, which are meant to deescalate dangerous or extreme situations and restore peace. When the police arrived, they were prepared to take out anyone in their path who interfered with their restoring the peace. However, peace was the last thing that occurred when the police arrived. When the police arrived any students in the near vicinity were met with violence and many were arrested on sight. This included students and teachers. People were chased by the police off campus grounds and were followed into nearby neighborhoods, where they were beaten and arrested. The result of this student–police conflict was that many were wounded, an even greater number were arrested, and unfortunately some lost their lives due to the brutality of the situation. The injustice and gravity of these events then sparked the movement for college students to assemble and band together to begin protesting the government and its actions and the role they played in the violence. Due to the brutality that the students were met with, this then allowed the Mexican people to resonate with the cause and lead them to come together and oppose the injustice the government was responsible for. On July 26, 1968 Mexico had its largest protest for its time. The goal of this protest was to achieve compensation for those injured and for the families of the dead, as well as the removal of the chief and deputy chief of police at the time.2 However, the Mexican government had different ideas as to how to handle the situation at hand.

In the year 1968, Mexico was set to host the Olympics, and during this time, Mexico was in the limelight and therefore one of the Government’s main focuses was on maintaining a united and peaceful front to the outside world. The government then took into account the events that had been taking place in the rest of the world that year, especially the student-led protests that were happening in the United States as well as in many European countries, and all the issues this was causing for the Unites States government as well as the European governments with the same issues. Worried that these student protests would bring negative and unnecessary attention on Mexico, the Mexican government decided to take this matter into its own hands. During the march on July 26, the peaceful protesters were cut off by soldiers who were planted in downtown Mexico City. Just when the protesters arrived in downtown Mexico City, people posing as protesters began to grab rocks that were planted in the trash cans there, which was very out of character for the city or for almost any city for that matter.3  With rocks in hand, the alleged protesters began to throw rocks at the soldiers on site, therefore escalating the situation dramatically. Due to this aggression, for the following three days the city was in a state of unrest. The city was overcome by violence and aggression, which seemed to stem from the aggression of the Mexican soldiers and “alleged protesters.” Following these three days of unrest, the people of Mexico still felt a need to combat all this unnecessary aggression instigated by the Mexican government. These protests continued until the fateful day of October 2, 1968.

On the eve of the 1968 Mexican Olympics, the Mexican government was becoming more and more concerned with the state of unrest that was occurring in Mexico City as well as throughout the rest of the country. Determined to put an end to this issue, the government decided to stop the protests at the root of the problem. On October 2, 1968, the protesters were meeting at the Plaza near the Edficio Chihuahua in downtown Mexico City in an informational session to plan their next protesting demonstration. The government then discovered their plan for the protesters to meet at the plaza of Tres Culturas in downtown Mexico City. The meeting for the protesters was set to begin at 4:00 pm, yet the police began to limit the amount of access to downtown at 3:00 pm.4  Despite this being a small number of people compared to the previous protests, approximately five thousand people were still in attendance. The police then enclosed the Plaza de Tres Culturas and began attacking the people in the plaza. The people were met with automatic weapons and were told to get on the ground. Despite getting on the ground, the people were still beaten and met with acts of aggression. This lasted approximately two hours. According to some sources it is said that the bodies were in piles all throughout the plaza. Unfortunately, there is not an exact death count of the massacre that occurred at the Plaza de Tres Culturas, due to the fact that the Mexican government controlled what the news outlets were able to broadcast. The massacre and its gravity were significantly down played.5 On October 3, 1968 Mexican news outlets were broadcasting the event as though only twenty-nine people died, whereas other sources estimate as many as two-hundred deaths.6 Unfortunately the exact number of deaths due to the events which took place on October 2, 1968 still remains a mystery.

With the lack of recognition from the government and the news outlets as to the massacre that occurred on October 2, 1968 in Mexico City, many people who were there felt that it was their duty to report and take record of the events that happened to ensure that this injustice would never be forgotten. Thus this is how the massacre that occurred on October 2, 1968  in Mexico City became known as La Nueva Noche Triste.7 The authors who are considered to have contributed the most to this literary movement are Octavio Paz and Carlos Fuentes, as they both commented on the events for its historical value as well as an outlet to call attention to the injustices that were occurring at the hands of the Mexican government.8 With the start of this literary movement, it gave people the opportunity to offer criticisms on the government and their actions in a more creative setting and ultimately allowed La Nueva Noche Triste to never be forgotten.

Unfortunately, we cannot say today that due to these protests in Mexico during 1968 that the Mexican government is completely reformed. However, we can say that since the events that occurred in Mexico, the Mexican government has not repeated these large-scale heavy-handed tactics on its people. Also, due to these events and the writing that stemmed from these events, a new dialogue between literature and history has emerged, which has given people a bridge between these two different areas. Overall, the goals of the protesters were never reached. However, their efforts were not wasted. The Mexican government now somewhat treats its people with more respect, and often thinks twice before acting in such ways. The literary movement which grew from the ashes of La Nueva Noche Triste allows two different disciplines to grow together and provide a different perspective on the events which took place. When looking back on the 1960’s and all the historical events that occurred, it is important to remember not just the events which took place in the United States or in Prague or in Paris, but it is also important to remember the events that took place in Mexico as well, especially the events which took place during 1968 in Mexico.