Murder for a Cause: Gavrilo Princip’s Assassination of Archduke Franz Ferdinand 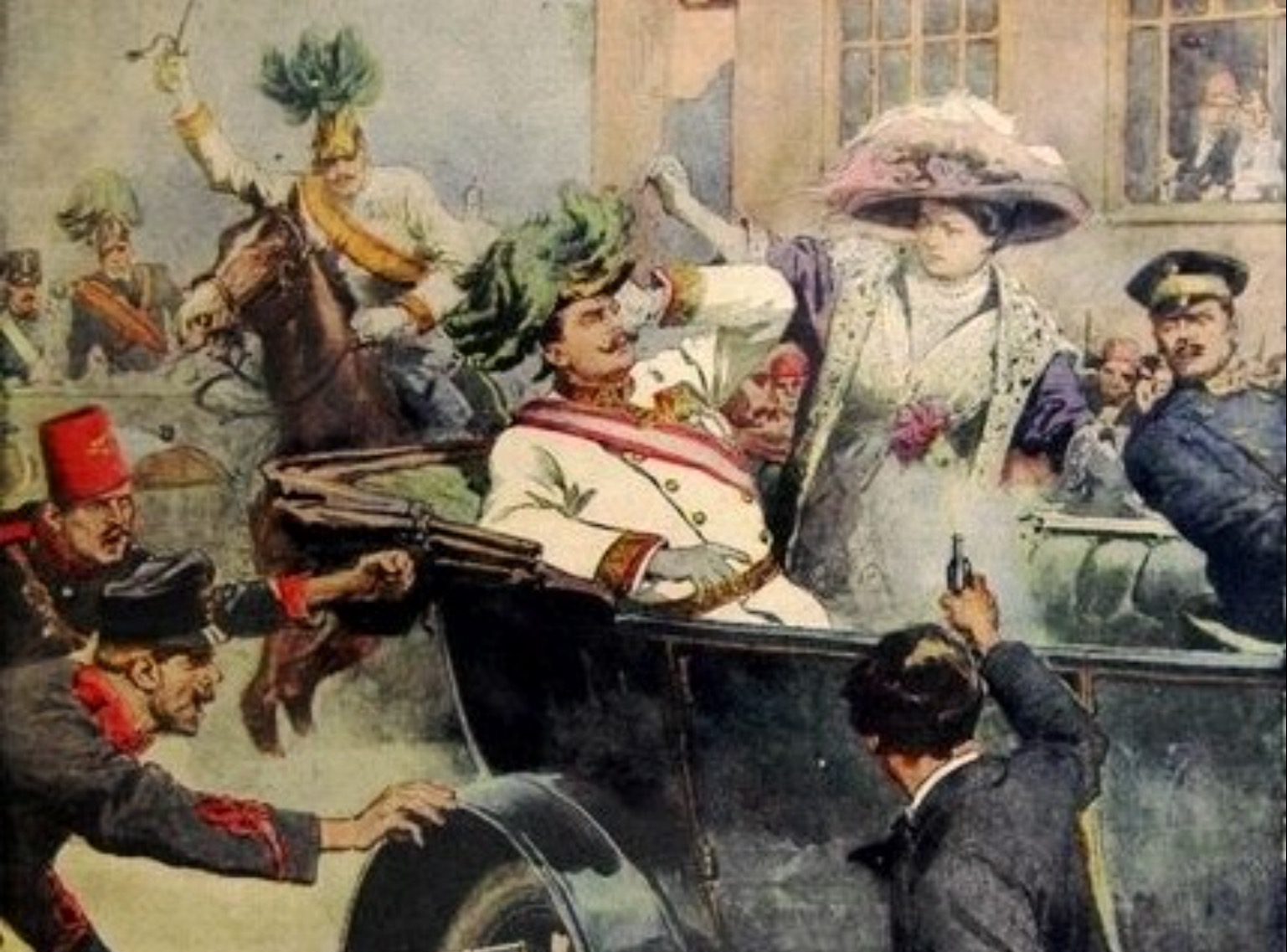 This is not a story about the start of World War I, or the consequences of it. This is the story of how a young man, Gavrilo Princip, was enthralled by a terrorist group called The Black Hand, a terrorist organization that wanted the unification of Serbians, and the somewhat ironic story of how he happened to be at the right place at the right time. This is the story of how Princip shot the Austrian Archduke Franz Ferdinand and his pregnant wife Sophie while they were in their car visiting Bosnia.

Gavrilo Princip was born on July 25, 1894 in Bosnia in what was then part of the Austro-Hungarian Empire. He had a normal childhood with two loving parents, Maria and Petar Nana Mičič, along with eight other siblings. He went to school and excelled, and at first he went to school at the military academy but then switched to the merchant’s school. Princip identified as a Serbian, and in school he loved medieval Serbian history and its “romantic folklore.”1

During this same time period, the Black Hand began to form. It was a secret group of Serbian nationalists who wanted the unification of all southern Slavs in the Balkans into their own nation of Yugoslavia, and they also wanted to get rid of Austria as a country through war, and then take control of Austria. They also wanted Bosnia and Herzegovina to unite with Serbia. Their slogan was “Unification or death!” which Princip agreed with wholeheartedly.2 In 1908, Austria-Hungary formally annexed Bosnia, which angered a lot of the Serbians in Bosnia, as well as in Serbia. This is what sparked Princip to join the terrorist organization. When he joined, he was expelled from school, which only further angered him. The Black Hand supplied his group with weapons, supplies, and money to fight against the Austrians. The group that Princip was a part of wanted to assassinate the Archduke Franz Ferdinand. They chose him for a couple of reasons. First, because he was next in line for the Austrian throne. Second, because he supported the Triune Program, which intended to give Slavs equal rights in the empire. Princip’s group did not like this program because it would have made it even more difficult to unite Bosnia with Serbia. The group prepared for their encounter by arming themselves with bombs and guns.3

On the morning of June 28, 1914, the Archduke Franz Ferdinand and his wife Sophie arrived in the city of Sarajevo. Ironically, this day was the anniversary of the Battle of Kosovo Field of 1389, which was a very important event in Serbian history. So, arriving on this date was taken by some to be something of a slap in the face to the Serbians.4 Once they got there, they were driven to the center of town in an open-top car. In this time period, Princip’s group had little reason to be afraid, as Ferdinand’s security was much different from today’s security details for important members of state. There were no crowd checks or secret service agents scanning everyone that would come into contact with the Archduke and his wife. The route that the car would take was even well-known. Six members of the Black Hand, including Princip, were in the crowd waiting for the royal couple. There were five Serbians and one Bosnian Muslim all waiting along the route for their chance to assassinate the Archduke. First, the car passed the Bosnian, but he could not bring himself to throw his bomb at them, and so it remained in his bag. However, the second assassine did not hesitate and threw his hand grenade at them. Amazingly, the driver saw it coming and sped up. His action probably saved the Archduke and his pregnant wife. Instead, the bomb hit a following car and injured the people in and around that car. After that attack, the Archduke decided to go to the hospital and visit the victims of the attack that had been meant for him.

At this point, history took an ironic twist of fate. General Oskar Potiorek decided to honor the Archduke’s wishes and take him to the hospital; however, he decided to use a different route to avoid the people and the crowds. But the General forgot to tell the driver of the Archduke’s car about the change in route. Because the driver did not know about the change of plans, he continued on the same route, where one of the members of the Black Hand, Gavrilo Princip, was sitting at the Maxim Schiller Café.5 At the café, Princip was thinking about their failure, and possibly contemplated suicide.6 When he heard the cheering as the Archduke’s vehicle approached, he got up, and to his great surprise, his second chance was driving by the café. Oddly, even though the driver did not know that he was going the wrong way, he stopped the car and started to reverse, after being informed of the route change. At that point, the car’s engine broke down and stopped working, stopping right in front of the café. Princip immediately took advantage of the situation. He pulled out his pistol and fired two times into the car where Ferdinand and Sophie were sitting. He was aiming for Ferdinand, who he hit in the neck with his first shot, but with his second shot, Sophie, protectively shielded Ferdinand’s body with her own, was shot in the abdomen. Ferdinand, Sophie, and her unborn child all died within minutes.7

After he had shot both the Archduke and Sophie, Princip turned the gun on himself and attempted to kill himself. However, a bystander threw himself on Princip and a group of onlookers started attacking him until the police arrested Princip and took him to jail.8 They soon found and arrested the other five members of the Black Hand, and they all subsequently had trials where they were each found guilty. The Austro-Hungary government also wanted the Serbian government to find and arrest all other people that could have been involved, particularly those that had provided the assassins with weapons; but the Serbian government said that it would be a violation of their citizen’s rights to send them to Austria-Hungary for trial.9 Princip was only a minor, and so they could not give him a capital punishment; he was instead sentenced to twenty years in jail. There was even a postcard sent around of him and of some of his co-conspirators in prison, calling them the “St. Vitus Day Heroes.” Serbians cheered him for what he had done and considered him a hero. This postcard was printed by Jakob Kappon, who was for “Serbs, Croats, and Slovenes.”10 While in jail, he spent most of the time chained to a wall, and because of his childhood tuberculosis, while he was in jail, he had to have an arm amputated due to his skeletal tuberculosis. He wasted away down to around 40 kilos and Gavrilo died on April 28, 1918 from tuberculosis after only serving four years of his sentence in Theresienstadt prison.11

Gavrilo Princip had a short life, but he made a large impact on the world. The members of the Black Hand saw this as a sign that their cause was just, but for many others, this was just a murder of the future ruler of their country. No one knew that assassinating the Archduke Ferdinand would be the spark that started the biggest war that had ever taken place up to that point in time. They saw it as a stepping stone for the unification of Serbians. This story is so important and interesting because there were so many things that happened that were either an accident or that could have easily been different. What if the first assassin hadn’t chickened out? What if the driver had gotten word of the new route to the hospital earlier? What if the car’s engine hadn’t stalled out right in front of that café where Princip just happened to be sitting? What if Princip had died of tuberculosis before the Archduke and his pregnant wife had come to visit the city? There are so many aspects to this story that make it jaw dropping, even more so because this event sparked one of the greatest wars in history, World War I, which, as we know, also led to the chain of events that led to World War II. If the assassination attempts had all failed that day, the world might have become a very different place. World War I might still have happened, but it might not have. We cannot know because Gavrilo Princip was successful in his attempt on the Archduke’s life and that has shaped history, maybe not for the better, but the world will never be the same because a car went on the wrong route and stalled out in the wrong place.