Mystery in the Canary Islands: the Enigmatic Guanche People 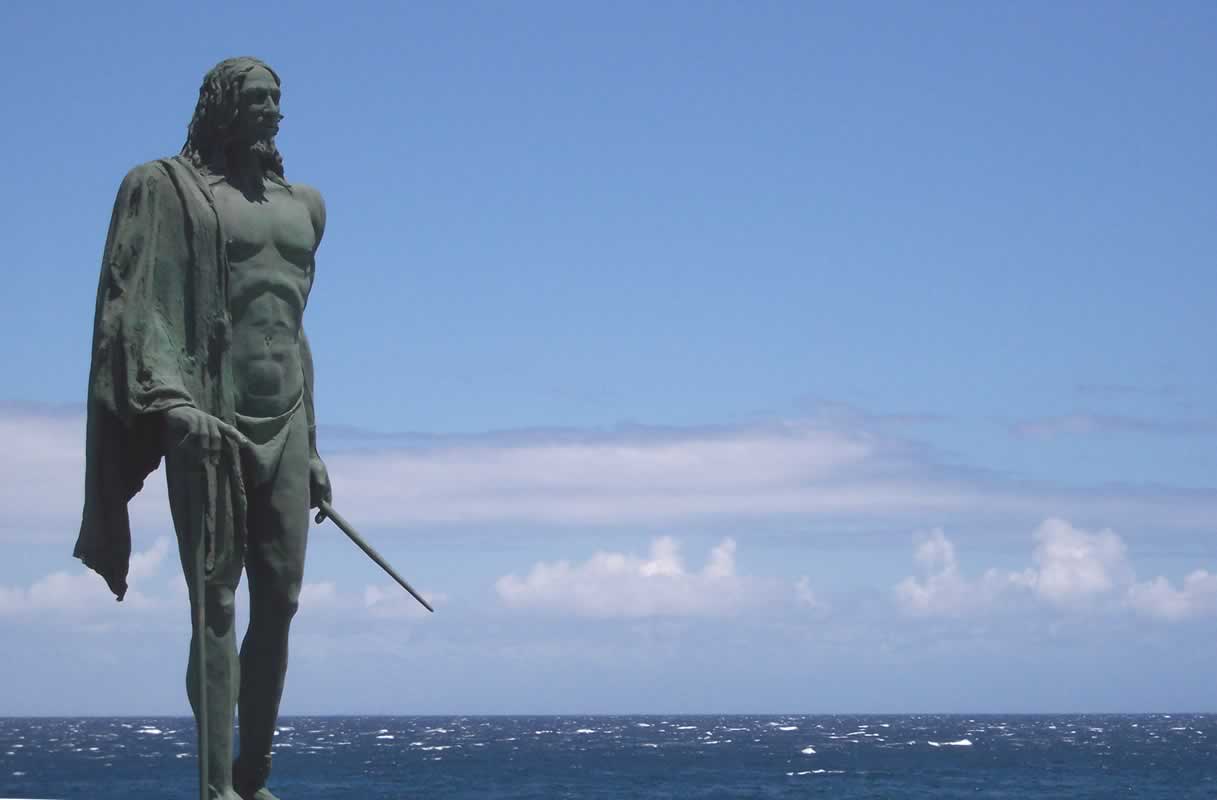 During the late 15th century, Spanish sailors encountered a series of islands: Tenerife, La Palma, Gran Canaria, and Gomera–located west of Africa and now known as the Canary Islands. Since these lands had the adequate conditions for growing sugar and producing wine, products in high demand in Europe, it was not long before plantations and trading posts were build by the Spanish.1

Apart from having profitable resources, the islands also became an important stopping point in the trans-Atlantic trade routes, since the islands lay between the New and the Old Worlds. What is often overlooked, however, is that long before the Europeans set foot on these islands and established trading posts, a group of indigenous people lived on these remote lands; the Guanche, a group of blonde-haired and blue-eyed people, resided on the islands.2

When the Spanish arrived, they were surprised to find that the Guanche people lived in stone age conditions: taking shelter in caves and huts, wearing little clothing made of reeds, and using stones and sticks as weapons. Despite their primitive lifestyle, the Guanche lived in a hierarchical society and were ruled by a group of elders and “menceys” (kings). The rest of the tribe consisted of farmers who raised goats, pigs, and sheep in the hills, and with their basic  techniques, planted seeds in the valleys. They built pyramids in an east-west alignment indicating that they worshiped the rising and the setting of the sun; they also made pottery and mummified their dead.3

Once the Guanche were discovered by the Europeans, they suffered the same fate that most tribes did in this era; they were forced into slavery on sugar plantations. As a result of harsh labor and of the devastation to the Guanche population, their culture barely survived.4 But if we could rewind time back to the days before the Spanish encountered the Canary Islands, we would still be left with some important questions: How did the Guanche arrive in the Canary Islands? From where do they originate?

There are several theories regarding the mysterious arrival of the Guanche in the Canary Islands, but none are certain. The most mentioned and supported hypothesis is that the Guanche tribe were descendants of the Moroccan Berber tribesmen. Researchers have discovered that the Guanche had similar homes, burial practices, and rock carvings as the tribes that once resided in North Africa. The story goes that there was a group of Berbers in the fifth century who rebelled against the Romans, and were thus exiled to the Canary Islands. It is argued that the Guanche originated from this region because their physical traits, specifically the blond hair and blue eyes, are often also seen among the Berbers, and that Guanche’s whistle-like language “tamazight insular” has its origins in the Berber’s language.5

On the other hand, historian Caroline Spence argues that the Guanche do not originate from Morocco in North Africa; instead, they come from Egypt. According to this theory, the tribe used papyrus reeds to make the boats they used to travel to the islands, and because this material rots rapidly, it would explain why no boat remains were ever discovered.6 There are several other cultural characteristics that tie the Guanche to the Egyptians. For example, both civilizations worshiped celestial bodies and had similar practices when dealing with their dead. The Guanche  mummified the bodies of the elite with similar techniques to that of the Egyptians, like binding the nails, packing the body with stuffing, and painting the hair of the mummy with henna. Also, several small step pyramids were found in the Canary Islands that are similar to the Egyptians.’ However, it is unknown whether it was the Guanche who built these pyramids to hold celebrations on or whether they were built after the islands were discovered by Spanish farmers who were clearing stones.7

Due to their physical characteristics, it is also contended that the Guanche are direct descendants from Europeans who–in 3000 B.C.E.–sailed from what is now the French Coast and the Iberian Peninsula, and were left stranded on these Atlantic islands. There are countless other less credible theories that explain the arrival of the Guanche, including one that the Vikings–who were skilled sailors–transported people to the islands, who then somehow lost their knowledge of seamanship.8 Some even argue that the Guanche are the remains of the sunken city of Atlantis, who over time evolved a new language and style of living.

Undeniably, the arrival of the Guanche on the Canary Islands remains an enigma. It is not known when, how, or in what numbers they arrived; it is only known that there is a link between them and other civilizations. No theory is definitive and it is debatable whether the Guanche even interacted with other civilizations prior to 1494, when Alonso Fernandez de Lugo conquered the Canary Islands enslaving and murdering its indigenous people. Despite this, the Guanche culture is not entirely extinct, because on the island of Gomera, the Guanche’s whistle talk survives as a reminder of the baffling existence of the Guanche.9.

It is good to know their whistle talk is alive and so their culture. It is interesting how many practices and techniques the Guanche shared with other cultures such as the Egyptians and the Berber tribesmen. Even though their traits resemble those of the Berbers and the story of their exile somewhat aligns, it is a long way there and you would expect them to move forward from the Stone Age conditions.

Imagine what other societies we have yet to discover. Most of us are familiar with the big names like Roman, Greek, Egyptian, and yet there are so many other groups that are maybe lost forever. I never heard of the Guanche until I read this article and now I’m fascinated by them and the theories of their origin. With the pieces that we know about them, their image is only a dim light that we overlook, and so I find it sad that most of their culture and history wasn’t written down.

Great article! I really enjoy reading this type of article that talks about history and ancient civilizations. You always read about civilizations like the Egyptians and Mayans, but a culture like the Guanches is completely new to me. It is also very interesting to see how cultures that did not come in touch with each other are able to share same practices.

This read was all too familiar, indigenous people were overrun by more advanced and economically stable people. The Guanche people had a nice sytem going for themselves, it was such a simple time to live in. These people were in harmony with nature, they were resourceful, yet they were easily conquered by the European lifestyle

This article was very informative for it explained the theory origins of the Guanche people, their decline and how their society still prevails today. It is sad to read that the people that inhabited the land were killed off by “explorers” that discovered the land. It is interesting to know that although explorers killed off much of their people, the Guanche culture is not extinct.

I have never really heard of the Guanche people and to hear that they existed was a shock. It was shocking to learn that there was no evidence of boats or another way that they arrived and that deductive reasoning is the main way that we were able to get our theories. It is also comforting to know that parts of the culture still lives on.

This is a very interesting article. I have heard of the Canary Islands and how the people were killed but I have never heard of the Guanche people. It is interesting how they lived in caves and huts and that their lifestyles were sometimes parallel to the Egyptians. It is unfortunate that they also were forced into slavery as well. Overall, this is a great article.

It saddens me that such an innocent group of people were immediately forced into slavery without even having time to process what was happening when the foreigners arrived! Much like a lot of other people I hadn’t heard of the Guanche people at all until I read this article, do you think they would’ve been more well known if things had gone differently when they were discovered? Or would things still unravel the way that they did?

Nice articles. Ah! Conquistadores. I guess they never thought of the consequences of their acts. Because not only do they put those poor trhu the most horrible treatments but, they left millions of their descendant without a real identity.

Many thanks for your interesting and enlightening article! I am Puerto Rican and as part of my extensive family tree there is a branch from the Canary Islands which has been confirmed by both the Family Search and Ancestry sites. My 12th Great Grand mother’s name reads as follows where her origin is intentionally CAPITALIZED as “Catalina Gaspar (GUANCHE) 1520-1580” no other ancestor is specifically identified. Once again thank you.