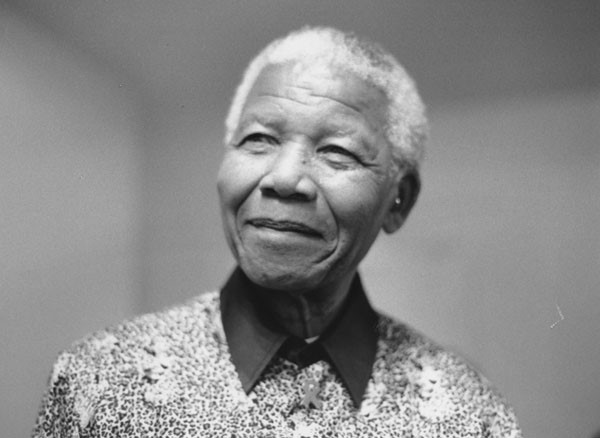 Five years ago, on December 6, 2013, the world lost a remarkable man who helped change so many lives. This man was given the name ‘Rolihlahla’ by his father when he was born, which is a name commonly referred to as “troublemaker.” However, most people know him by the name given to him by his school teacher: Nelson.1 Nelson Mandela grew up spending his life fighting for freedom in his country of South Africa. Since 1948, the social infrastructure of South Africa had been transformed into a system of apartheid, which literally translates to “apartness.” Apartheid separated people based on the color of their skin. Although white persons made up the minority of the country, they had complete control over it. They created laws that mandated the lives of both black and colored persons, which are a mixed-race people in South Africa. Blacks and colored persons were restricted to certain areas and could hold only certain jobs.2 People were kept apart to protect the privilege of the few white descendants of settlers at the price of daily poverty and oppression. Apartheid also meant blacks and colored had no right to vote and they were stripped of their citizenship. This system institutionalized and legitimized policies that violated human rights of all non-white people in South Africa. Nelson Mandela was an anti-apartheid activist who played a central role in triggering mass protests and campaigns against the racial segregation the people were facing.

In 1944, a few years before the beginning of the system of apartheid, Nelson Mandela joined the African National Congress (ANC), which is a political party that was formed in response to the discrimination towards colored and black persons living in South Africa.  Mandela joined the ANC when he helped to found the ANC Youth League. The ANC worked closely with other anti-apartheid organizations.3  Apartheid was implemented in 1948. Shortly after, the ANC launched a Defiance Campaign. This campaign encouraged people to engage in nonviolent acts such as strikes and protests. The ANC supported nonviolence, whereas other militant groups, such as the Pan African Congress (PAC), used violence as a way of making their voices heard.4 Mandela was appointed as the Defiance Campaign’s national volunteer in chief. This position gave him the responsibility to travel across South Africa to get as much support as he could for the campaign. Mandela was able to form a significant alliance, made up of black South Africans, and other colored South Africans, united against apartheid.5 Nelson Mandela’s efforts resulted in the number of members rising from about 7,000 to over 100,000.6 While he was traveling to recruit people into the ANC, Nelson Mandela was arrested on June 26, 1952 for violating the curfew that had been set in place for black and colored South Africans. He was later released and was able to witness the spread of the Defiance Campaign.7 In 1960, both the ANC and the PAC were involved in an anti-apartheid protest with around 5,000 people. Without warning, they were shot at by the South African Police Officers. 69 protestors were killed and at least 300 of them were injured. This became known as the Sharpeville Massacre. Following this event, the South African government decided to ban the ANC and PAC.8 Despite the fact that they were banned, the ANC continued meeting in secret. The government was not listening to them, so they decided that they would have to adopt militant measures to produce the change they wanted.9 This led to the creation of the guerilla army Umkhonto we Sizwe (also called MK or Spear of the Nation)  in 1961, which was later adopted as the armed wing of the ANC. Nelson Mandela became Umkhonto we Sizwe’s first commander in chief. Nelson Mandela had contemplated taking up arms for several years, but after the Sharpeville killings, he felt that the time had finally come.10

As a leader of the MK, Nelson Mandela launched bombings and other guerrilla activities.11 Nelson Mandela was even smuggled out of South Africa so that he could learn about armed struggle from other countries. Mandela learned a lot from the Algerians and their armed struggle for independence against the French.12 Following his travels, Mandela went back South Africa and was later captured by the police on August 5, 1962, and charged with leaving the country without proper documentation. Mandela was found guilty and was sentenced to five years of hard labor. His trial, however, did not end there. He along with several others were charged with recruiting people for sabotage, the use of guerrilla warfare, and threatening to overthrow the South African government.13 In his book, Long Walk to Freedom (1994), Mandela tells his readers that the armed struggle was his strategy for bringing the National Party to the negotiating table, not a campaign to overthrow the government.14 Mandela took this trial as a chance to explain himself and speak up against apartheid. While on the witness stand, Mandela delivered a famous speech in which he stated,

During my lifetime I have dedicated myself to this struggle of the African people. I have fought against white domination, and I have fought against black domination. I have cherished the ideal of a democratic and free society in which all persons live together in harmony and with equal opportunities. It is an ideal which I hope to live for and to achieve. But if needs be, it is an ideal for which I am prepared to die.15

On June 12, 1964, the court judge reached a decision. Mandela and eight of the other defendants were found guilty. Mandela was given a life sentence and was sent to a maximum security prison on Robben Island. While he was incarcerated, Mandela was forced to live in extremely harsh conditions. His cell had nothing but a bucket, a floor mat to sleep on, and a small desk. Mandela, just like all the other black persons, was forced to wear shorts instead of pants. This was the prison’s way of infantilizing them so that they would be just “boys” in the eyes of the guards. Mandela would spend his days hammering stones into gravel carrying out his inhumane punishments alongside all the other prisoners.16 Despite the difficulties he and the others were faced with, Mandela remained strong and served as a mentor to his fellow inmates. He encouraged them to improve their lives while in jail and he motivated them to educate themselves. Mandela even completed a bachelor’s degree program during his time on Robben Island. In April 1982, Mandela was transferred to another maximum-security penitentiary known as Pollsmoor Prison due to an illness he had contracted. In 1985, the State president of South Africa, P. W. Botha, offered to release Mandela if he agreed to refrain from armed struggle. Botha, however, did not do this simply because he wanted to. Botha was pressured after the Red Cross report on Mandela’s poor health. Mandela had contracted tuberculosis and his health was declining. In the end, Mandela rejected his offer. In 1988, Mandela was moved to minimum security facility and in 1989, Botha suffered a stroke and F.W. de Klerk took his place as State president. On February 2, 1990, de Klerk after discussing a path forward with Nelson Mandela, removed the ban on the ANC. After 27  years of imprisonment, de Klerk freed Mandela.17 Upon his release, Mandela delivered a speech in which he stated, “We have waited too long for our freedom. We can no longer wait. Now is the time to intensify the struggle on all fronts. To relax our efforts now would be a mistake which generations to come will not be able to forgive.”18 When Mandela delivered this speech in Capetown, he addressed an audience of half a million. He had unwavering support from so many people despite his imprisonment. Books, articles, films, poems, plays, and songs were dedicated to Mandela while he was in prison.19 It is also important to note that following his release, Mandela used his platform as a symbolic figure to convey the message that South African women played an important role in their country’s fight for freedom. He stated, “‘I pay tribute to the mothers, wives and sisters of our nation. You are the rock hard foundation of our struggle.'” 20 His release was truly a symbol of transformation in South Africa.

Even though Mandela spent nearly three decades locked up, his commitment to ending apartheid was stronger than ever. He still supported an armed struggle, and he traveled outside of South Africa to stress the importance of going against the apartheid system. It was only a few months after his release that he came to the United States to campaign against South Africa’s apartheid.21 He spent the next two years in negotiations between the South African government and the ANC. Mandela was considered “the greatest negotiator of the twentieth century.” 22 He utilized different types of negotitation strategies including good practices and tactics. Good practices assert interests, build relationships and trust, and use effective communication. Tactics include making extreme first offers to create room for concessions, exaggerating arguments and threatening to leave the negotiation.23 Mandela was able to use these techniques successfully even in a heated and complex South Africa. In 1993, an agreement was reached, and the State president de Klerk agreed to form a government which would end apartheid and open the political process to all South African citizens. Mandela’s ideal democracy was a non-racial democracy that would defeat racism.24 In 1994, Mandela was elected President of South Africa and he aimed towards reconciliation between the white and black South Africans.25 This was the year that black South Africans were able to vote in national elections, and this event marked the end of apartheid.26 In December 1997, Mandela stepped down as the president of the ANC. Two years later, he stepped down as the South African President. After his presidency, Mandela spent his time advocating for human rights and helping out with numerous charities. He helped to raise funds for children’s charities, and for the treatment of AIDS. Mandela also spoke out for justice on issues such as racial discrimination, gender equality, and poverty. He wanted peace, freedom, and social justice. On November 10, 2009, the United Nations General Assembly declared July 18 as ‘Nelson Mandela International Day.’ This was done in response to Mandela’s years of service in promoting and protecting human rights. On Nelson Mandela International Day, the UN invites people to take action and make a difference in their community.27 On June 1, 2004, Mandela announced that he would be withdrawing himself from public life. This was because of his several hospitalizations caused by his prostate cancer that he had been diagnosed with three years earlier. On December 5, 2013, he died from a lung infection at the age of 95.28

The name Nelson Mandela is one known around the world; it is a reminder of courage, strength and wisdom. He taught his country and those across the globe very valuable lessons. Mandela taught them to be fearless, and to work towards making their communities a better place. Change is not always a bad thing; sometimes it is the best thing that could happen. Change is what was needed to achieve Mandela’s vision of peace and social justice. Nelson Mandela never gave up, and he always kept his head held high. He fought for a better life in South Africa, and despite being treated cruelly, he managed to love and forgive. “‘The lesson is forgiveness. You must not allow hate to fester your brain. You can never allow racism, hatred and bitterness to rent space in your head.'”29