Nikola Tesla: The Man Who Gave a New “Light” to the World 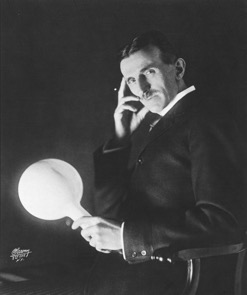 Nikola Tesla, more commonly remembered as the inventor of technologies such as the Tesla Coil, was a Serbian-American Scientist, inventor, physicist, mechanical and electrical engineer. Tesla was born on July 10, 1856, in the Austro-Hungarian Empire, which is now known as present-day Luka, Croatia. As an adult, he studied both Mathematics and Physics at the University of Graz and philosophy at the University of Prague. In 1884, at the age of 28, Tesla immigrated to the United States in the search of both freedom and opportunity.1 In June of that same year, Tesla finally set foot in the United States, penniless, but still full of ambition fueled by his dream to revolutionize the world through advancements in electricity.

In the days following his arrival, Tesla was given the opportunity to meet with none other than Thomas Alva Edison, the inventor of the phonograph, the incandescent lightbulb, and the early motion picture camera, just to name a few. More notably, Edison was recognized for the invention of direct current, which was at the time the most popularly used form of electricity.2 His newfound fame distinguished him as a very important and influential person during that time. And Edison recognized the potential that Nikola Tesla possessed, and employed him to work under his supervision.

After months of working under Edison, Tesla began to form a close bond with him, earning the position and title of Edison’s apprentice. Being an apprentice and working closely on research and inventions with Edison himself, Tesla was able to test and further his knowledge on scientific inventions and eventually was able to test theories and inventions of his own. Unfortunately, with this expansion in his capacity of understanding, Tesla was able to analyze certain faults and options for improvements in Edison’s inventions. When he confronted Edison about possible improvements that could have been made to the functioning of direct current, Edison blatantly opposed any of the claims suggested by Tesla. Consequently, both men got caught up in an argument, and Tesla was coerced into resigning from working with Edison.3

However, Nikola Tesla’s improvements in terms of electricity drove him to establish a new form, known as the practical alternating current (AC) motor. This type of current functioned using two sources of alternating current that worked out of phase with one another by creating a rotating magnetic field that would serve as a motor.4 In addition to this, Tesla also introduced his own version of lightbulbs, commonly known as fluorescent light bulbs.5 With the introduction of the AC motor, a lighting system that proved to be more efficient than Edison’s, and a new type of lightbulb, Tesla had managed to slowly take out the competition that he had with Edison. As more people started investing in AC networks, the less people remained with Edison’s “alternate” direct current. With the help of investors such as Westinghouse and J.P. Morgan Jr., Tesla was able to dominate the market for electricity and rise to fame.6

Other advancements made by Nikola Tesla were in the medical field, namely, with medical practices using “Tesla Currents,” which used a form of electrotherapy to produce heat in tissues of the human body; and in other procedures such as “teslinization,” which is where Tesla Coils were used on patients to stimulate high frequencies of electric fields within the body. One of the more recognized inventions made by Tesla are the earliest forms of X-Ray machines.7 Today, we use x-rays in a great deal of medical procedures that require the need to further analyze the condition of patients in areas that are not immediately visible to the human eye. This breakthrough in medicine was made possible by the development of radio, wireless transitions of energy, the discovery of rays that could help penetrate the human tissue, and the use of Tesla currents in medical procedures.8  With these various types of practices and inventions, Nikola Tesla was able to effectively make his mark on the medical industry, most of which still exists in the equipment and practices we use today.

It is no secret that Nikola Tesla represents an ideal example of the American dream; a poor Siberian immigrant leaving everything behind and moving to America to pursue his dreams and making a difference. Undoubtedly, Nikola Tesla has proven to be one of the most influential scientific minds in the fields of medicine, physics, mathematics, and engineering. In his lifetime, he managed to do the things that many of wish to be able to do, which is to revolutionize the way we view the world through ingenuity, innovation, and persistence. Tesla has managed to make his mark on the world and leave his legacy in American History.