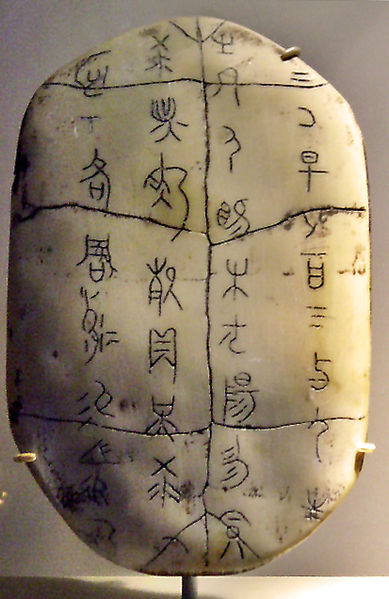 The Shang Dynasty was born in 1550 B.C.E. after the fall of the Xia Dynasty. A ritual was created during the latter part of the Shang Dynasty, which placed an emphasis on the use what we now call Oracle Bones. Those bone give us a glimpse into how China’s first written language emerged as well as some of its first uses.

This all began in 1200 B.C.E. with the ruler of China establishing a palace and temple complex in Xiaotun, near Anyang. This move pushed the leaders of the Shang Dynasty to undergo a dramatic change. It ushered in what may be the first written records of a civilization in East Asia. The Late Shang Dynasty began with Wu Ding, the twenty-first king, and ended with Di Xin. During the Great Shang Dynasty these kings with their nobles, kinsmen, and other subjects consulted their ancestors on how to go about doing their various political duties.1

They contacted their ancestors for guidance through what archaeologists call Oracle Bones. Shang Diviners were experts in the use of fire and bones to divine the future. These Diviners would drill holes in ox shoulder blades or turtle shells; they would take red-hot pokers and place them into the hollows of the bones, which would in turn cause the bones and shells to crack and sometimes break. At the moment when the Diviners pressed the pokers in the holes, they would speak the king’s questions to the spirit that was being summoned. Once the cracks were interpreted, they were further recorded by etchings near the cracks. Those etchings make up the earliest form of Chinese writing. They served as records of the kinds of things kings wanted to know, what kinds of answers they believed were revealed, the names of the Diviners, the outcomes of the events, and the dates these divinations took place. These “oracle bone inscriptions” or “oracle bone texts” have been found in complexes in Xiaotun, near Anyang, which appear to have been the resting place for many of the Oracle Bone texts that we have today.2

In some cases with the oracle bone texts, we find that the diviner was the king of the Shang Dynasty himself. When the etchings speak of the future or outcome of important events, the diviner for that ritual was most likely the king. None of the Oracle Bone texts that have been written by the king have seemingly ever been wrong. This record of perfection was important for the king because it legitimized his rule and prestige for having strong powers of spiritual interpretation. Yet, we know that someone cannot always be right in foreseeing the future and so the errors of the king were not recorded, but silenced. This large amount of record keeping really sheds light on Shang religion and culture that had not been seen before. Reading these historical texts is a hardship in itself. The evolution of writing in the Shang dynasty through other texts have given historians clues into deciphering these Oracle Bone descriptions.3

The foremost interpreter and historian of Oracle Bone Inscriptions in the West is David Keightley. Writing many books and articles on his interpretations, he has created a history for the people of the Late Shang Dynasty that includes religious and cultural beliefs in his works. One of the biggest collections of Oracle Bones resides at Princeton University and many of these have been seen and interpreted by Keightley. There are always new evidence surfacing and most of the time the meanings of the bones change, making it truly a mystery that can only be solved with time.4