Out With the Old and In With the New: The Transition of Amenhotep IV to Akhenaten 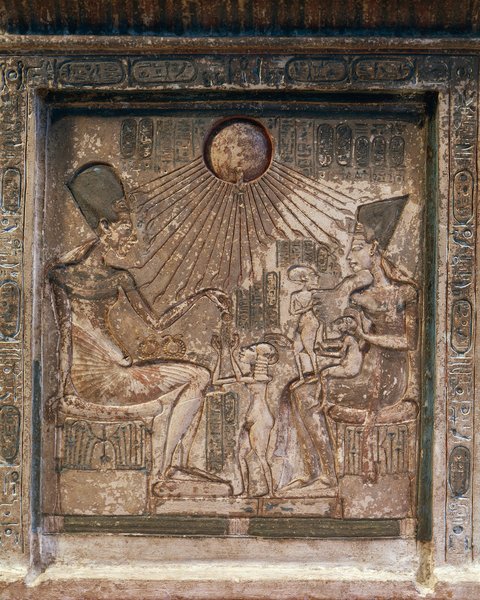 The saying, “Like father, like son” is many times referred to as a son who follows his father’s footsteps and who shares similar beliefs and values. However, for Amenhotep III and Amenhotep IV this was quite the contrary. Some scholars argue that Amenhotep IV was many times kept behind closed doors due to his unique physical appearance; and on the other hand, some argue that Amenhotep IV had been serving as an assistant king to his father for an extended amount of time before the crown was officially passed down to him.1 In the fifth month of the year 1353 B.C.E, Pharaoh of Egypt, Amenhotep III, officially handed the throne to his second son Amenhotep IV, after the eldest son died at a young age. After Amenhotep III reigned for thirty-eight years, Amenhotep IV became the tenth king of the eighteenth dynasty. According to scholars, Amenhotep III ruled peacefully. He carried on sacred traditions instilled within Egypt. Amenhotep III made no drastic changes with the power that he was given over the land and his people; nor were there rebellious acts or revolts against traditional views during his reign.2 Amenhotep IV became king during the New Kingdom, Egypt’s most prosperous period.3 This glorious time in Egypt would soon be diminished as Amenhotep IV would struggle to replace the ideas of polytheism (the belief in many gods), which were well practiced and thriving under his father’s reign, with the revolutionary idea of monotheism (the belief in one god). Scholars argue that he initiated a revolution in Egypt in the perspective of religious thinking. Although Amenhotep IV did not create the idea of monotheism, he had a great influence on its spread in Egypt. Because he initiated new ways of religious thinking, Amenhotep IV is characterized as a very impactful African philosopher, not only for his own time, but throughout history. Some argue that his religious thinking did not initiate a revolution, but it endangered the traditional way of life Egyptians conformed to.4

It gradually became apparent that his religious thinking had taken a turn, as he began to replace religious images and symbols of the God Amen with the God Aten in temples and chapels across the land of Egypt. In Amenhotep’s fourth year of reign, he claimed to be “revealed by Aten himself.”5 This revelation led to a number of events, such as the Pharaoh changing his name in the fifth year of his reign. He changed from Amenhotep, Mighty Bull, tall of feathers, to the Aten inspired name Akhenaten, Mighty Bull, beloved of Aten. He not only changed his own given name of Heru (Horus), but he had the names of his wives changed as well.6 Akhenaten not only used his given power to change religion within Egypt, but he made changes to the politics and celebratory traditions as well. For example, the Sed jubilee festival was celebrated by Akhenaten on his third anniversary of becoming Egypt’s ruler. This type of festival, however, was traditionally restricted for the thirtieth regnal year. It is stated by scholars that “to break this tradition meant that the king could break any tradition.”7 Akhenaten was making drastic changes within such a short time of being granted the power of the throne. Further breaking tradition, he moved the capital from Waset to the New Land of Akhenaten. The new capitol was built on a site that had not yet been touched by man, located on the east bank of the Nile. When moving the capital from Waset, Akhenaten did not take along with him the old clergy and those who held an original position of authority, but chose to appoint new authorities within his own personal preferences and likings.

After reigning for seventeen years as a very controversial King, he died in the year of 1336 B.C.E and was succeeded by Tutankhaten, his youngest probable son.8 After Akhenaten’s death, the traditional politics and polytheistic religion were quickly restored and Akhenaten was labeled as a criminal throughout the land of Egypt. According to scholars, the temples in which Aten was praised were abandoned and soon demolished, and Akhenaten’s reign as king was removed from the records.9

Although Akhenaten did not discover monotheism, he has provided us with the greatest example of non-Jewish monotheism in ancient history, and he, indeed, made an everlasting impact on African philosophy and religious thinking.10

Really well organized! I had never heard of Akhenaten, and to learn that Amenhotep was hidden due to his physical appearance is so sad and shallow. Egypt really was all about looks! It is interesting to see how Akhenaten stared from traditional views, and made his own revelation. Very impressive that he had a great influence in African thought and philosophy for it.

This was a very interesting article. I wonder what drove Akhenatan to pursue monotheism as strongly as he did, perhaps the fact he was hidden due to his physical appearance had something to do with it. His story reminds me of Commadus who became emperor of Rome after his father and ruined its age of prosperity as well. This article really calls into question the whole father son dynamic in those times, that they could rule so differently with such completely different outcomes.

It was a pretty amazing story, I have never heard of the life of a pharaoh and especially not from the leader that was disliked in his time. It is pretty interesting to learn that Akhenaten completely changed the religious views of Egypt by going from polytheistic to monotheistic. The act of changing the traditional known view to his own really made him disliked by his people and its funny to think that his people would erase his history and legacy. In a twist of faith I find it funny that his son would become one of the worlds most recognized pharaohs of all time. Its a pretty well written informative essay good work.

It’s interesting to see the radical changes implemented by Amenhotep/Akhenaten and how unpopular he was his subjects. In order to completely go through with the radical changes he even went as far as to change his given name as well as breaking an age old Egyptian traditional festival and the political ways of ancient Egypt. It would not be an exaggeration to call his thinking revolutionary for its time despite how widely opposed he was by his people.

Akhenaten’s story is indeed an interesting one. It is difficult to determine whether his religious movement would have been beneficial to Egypt in the long run. I wonder if Akhenaten’s attempt to change Egypt’s religion was because he truly believed in a monotheism god or if he only did it out of spite of his father. Interesting to see that Akhenaten’s new religious movement died out rather quickly. This was very fascinating, job well done.

I enjoyed reading this article and learning more about Akhenaten. I enjoy stories that have debate surrounding the facts. It was interesting to read that some scholars thought Amenhotep IV was kept behind closed doors because of his physical appearance but some also thought it was because he was serving as an assistant to his father, before the crown was passed down to him.

I never heard of Akhenaten or that he even ruled over Egypt. He was interesting because he did strayed away from the normal decisions the previous kings would do. In doing so there was a great impact on both religious and political aspects. It is sad to hear that once he died they basically turned back and even went so far to erase him from the records as if his impact did not even happen. Overall great job keep up the great job.

Very informative article. I had never heard of Akenaten before nor was I aware that ancient Egypt had ever practiced monotheism. I think it is interesting that he moved the capital city and changed a lot of the statuary to reflect his change in religion. I had heard that it is common in Egypt for the next ruler to remove the record of the previous ruler as much as possible. It does not surprise me that that was the case when Akenaten died.

I had never known the story of Akhenaten till now so I had no idea that he caused such an uproar in Egypt that his people considered him a criminal. I thought the article was organized well but I have to admit I was a little confused in the beginning on who was who and who was whose son because the names were the same besides the roman numerals. Other than it was very clear on the religious impact Akhenaten made during his ruling. Good work!

How interesting that Akhenaten’s rule was removed from Egyptian history and he was considered a criminal for his monotheistic beliefs. Even though history of his rule and his temples were destroyed he did quite a lot by moving the capital and enforcing his monotheism across Egypt, even breaking the Sed tradition is impressive. He went against almost every grain in Egyptian society and religion and is still being talked about today as an important African Philosopher.