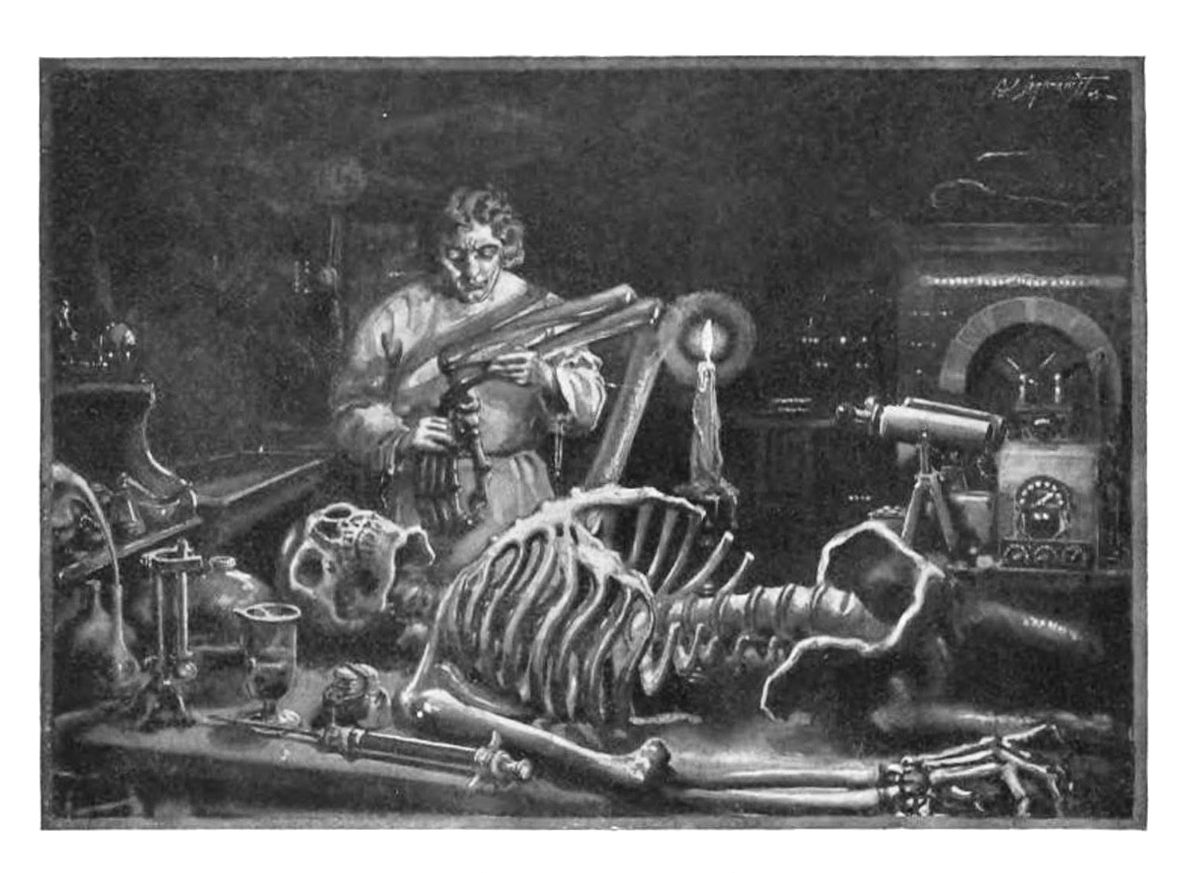 Two hundred years after Frankenstein’s release, scholars and casual readers alike continue to study Mary Shelley’s most prominent work. On the surface, Frankenstein is simple horror: a gruesome monster turns against the scientist who created him and attacks his creator’s loved ones. One could argue that Shelley intended to warn readers against hubris, and that pushing outside the natural boundaries of science has consequences. However, a closer examination of the text reveals a social commentary in addition to the scientific one. Rather than begin Victor Frankenstein’s tale with his creation of the Monster, Shelley introduces the scientist as a dying man.1 The ailing scientist first reflects back on the events of his early years: his mother’s death and time spent with Elizabeth, a childhood companion who Victor later marries. As the story progresses, Shelley depicts not just the aftermath of the Monster’s attacks, but his interactions with Victor that precede the violence. When taken together, these moments weave a cautionary tale deeper than the apparent scientific warnings. In Victor’s treatment of the Monster, as well as the text’s depiction of women, Shelley paints a world in which the privileged class handles the outsider with disdain, and, in doing so, faces dire consequences.

To fully grasp Shelley’s intent in Victor’s treatment of the Monster, the reader must first consider who Victor is before he brings the Monster to life. In the first seconds of his tale, Victor states that his “family is one of the most distinguished” in Geneva.2 Even when he moves away to school, the young man has a “servant” available to wait on him.3 Furthermore, by pursuing education, Victor seeks “to join the new class of learned men” who “replaced the landed gentry as the upper society in Europe.”4 Through both heredity and action, Victor manifests the privileged class. Of course, the Monster does commit atrocities throughout Frankenstein, but not in his first living moments; if the Monster were inherently evil, he would have killed Victor when he was first brought to life. Therefore, any interaction between the two should not be viewed as man versus creature, but rather as a privileged being versus an outsider.

With this context in mind, Victor’s treatment of his creation is clearly problematic. In perhaps the text’s most gripping moment, Victor marvels at the Monster as “the shriveled complexion and straight black lips” come alive. “Beautiful!” Victor exclaims.5 He dwells on every aspect of the Monster’s appearance, amazed at his own handiwork until he sours at the “horrid contrast” between the Monster’s “teeth” and “watery eyes.”6 In this scene, Victor never considers that he has somehow usurped the natural order or even that the Monster might turn out to be evil. He simply dotes on the physical appearance of his creation. So, when Victor “rushe[s] out of the room,” it is because he is disgusted by the pure physicality of the Monster, and not because of some terrifying moral epiphany.7

Aside from Victor’s initial fright—which would be understandable were he not the Monster’s creator—his aversion to his own creation never improves. Following the murder of Victor’s younger brother, William, Victor returns home to Geneva and eventually travels to Mont Blanc. As Victor navigates “the field of ice” at the mountain’s base, the monster appears, confronts Victor, and convinces his creator to follow him into a hut.8 Here, Victor asserts that he now understands “the duties of a creator towards his creation,” and this statement might seem true, considering Victor finally speaks with and listens to the creature.9 However, one must also consider that the Monster is both physically more powerful than Victor and Victor believes the Monster has murdered young William, suggesting that Victor never really has a choice in accompanying his creation. Once inside the hut, the Monster details his failed encounters with humans since he last saw his maker, and finally begs Victor to create a second life so that he may have a companion. Victor initially complies, believing that with a mate, the two creatures may find solace together away from Europe.10 While conflicted about bringing a second life into the world, Victor only rips apart the lifeless body of this creation when he sees his first creature staring in through the laboratory window.11 In this series of interactions between the young scientist and his creation, Victor is always motivated by the Monster’s appearance rather than by his actions.

In addition to the major plot events involving Victor, Shelley uses two subtle moments to comment on the Monster’s place in society. Scholar Anne Mellor explains, “only two characters…do not immediately interpret the creature as evil.”12 The blind Father De Lacey, who the monster tells Victor he encountered during his travels, cannot evaluate the Monster’s appearance. And the ship captain, Walton, who finds the dying Victor at the story’s very beginning, hears Victor’s description of the Monster before meeting him. Both men treat the creature with kindness.13 While neither of these characters advances the main narrative forward in the manner Victor does, they both depict a humane response to the creature, and, in doing so, highlight Victor’s cruelty towards his own creation. Unlike Father De Lacey and Walton who come away from their encounters with the Monster unscathed, Victor faces extreme consequences for abusing his creation. Indeed, Victor’s family is both literally and figuratively torn apart by the Monster. And, upon finally deciding to rid the world of his creation, Victor chases the Monster into the Arctic, where he is consumed by the hostile elements and eventually “sinks…into apparent lifelessness.”14 In essence, Victor manifests privilege; he is born into an influential household and receives opportunities others cannot. Contrarily, Victor’s creation is jerked into a hostile world where he is judged entirely by his appearance. Victor’s treatment of his creation—the outsider—is motivated entirely by the superficial trappings of physical appearance, a trap that ends in disaster for Victor and thereby the upper class he represents.

Underneath the plot’s surface lies a less obvious but equally important commentary on how humans treat one another. “Frankenstein,” authors Dorothy and Thomas Hoobler assert, “is a novel of male voices.”15 Indeed, this novel relies on three different narrators—all of whom are male—and focuses almost entirely on male characters. As “many Gothic novels…written by women” feature a “heroine rather than a hero,” the reader must examine why Mary Shelley would relegate women in Frankenstein to the background.16 Two sections in this novel should be of particular interest to the reader. First, as a child, Victor does express interest in science, but he does not progress from reading to experimentation until later; immediately after his mother dies, he departs for the “all-male world of the university.”17 Once at Ingolstadt, isolated “from the feminine” influence that defined his childhood, Victor falls into the dark world of pushing outside science’s moral boundaries.18 Secondly, while Victor loves Elizabeth enough to marry her, she remains absent for most of the text, providing almost no value to the narrative until the end. Once the Monster kills Elizabeth, Victor finally resolves to destroy his creation. Therefore, Elizabeth’s only significant contribution to the text is as a passive recipient of another character’s action.

While one could argue that the lack of female representation in Frankenstein constitutes nothing more than Shelley’s desire to highlight the struggle between Victor and his creation, this argument fails to examine Shelley’s other options as an author as well as the context in which the book was written. Were Shelley only concerned with the scientific aspects of Frankenstein, she would have begun Victor’s narrative in a far more interesting place than his childhood, perhaps in the morgue searching for limbs to fuse together. Furthermore, the Monster’s first murder could have just as easily provoked Victor to action. These alternatives delineate that Shelley’s choice to include Victor’s mother and Elizabeth’s murder in the narrative was a deliberate one. Furthermore, it was “a common convention for women writers” in the early nineteenth century to publish their work anonymously as Mary Shelley did with her 1818 version of Frankenstein.19 This unfortunate reality of the time means Shelley would have been aware that female involvement in a work—as an author or as characters—could diminish the book’s reception, thereby reducing her opportunity to make a point about the treatment of women in society. Her later work, published after Shelley achieved financial independence from her husband, was “highly political.”20 Considering this context, it appears Shelley wanted to make a statement with her female characters but knew doing so would damage the book’s credibility, so she chose instead to make a statement with their absence.

In short, while Frankenstein does, of course, show scientific experimentation devolved into calamity, the cautionary aspect of this tale lies in the human interactions. As both a member of an elite family and an educated scientist, Victor manifest the privileged class who make decisions regarding the lives of others. Responsible for the creation of the outsider, Victor then treats that outsider with disdain, a choice which eventually leads to Victor’s downfall. Hidden inside this narrative is a commentary on a specific class of outsider: women. If Victor portrays the privileged class in society, then his mother is the feminine influence that goes unheard. Shelley’s warning here is significant: viewing the outsider as a monster and ignoring the voices of society’s unseen members can prove disastrous.