Quite a “Shock”: William Shockley’s Imprint on Silicon Valley 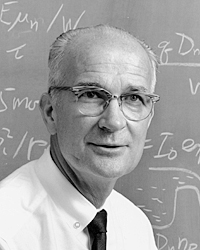 Machines have been a part of our world for many years now. There is a notion that machines must be able to control themselves, when in fact, some of the best machines are controlled and operated by a human. Machines can range from many sizes, from phones and computers to assembly line robots of a factory. Those who use computers know that they use electricity, but what the everyday users do not know is how so much power can be maintained in such a small space. The key is the transistor, a small piece of hardware that amplifies the electrical current that is imputed. This is important because in order to get the same output, electrical current would have to run through many vacuum tubes that take up a large sum of space.1 In 1947, William Shockley managed a solid state physics team at Bell Laboratories that focused mainly on the properties of semiconductors. A semiconductor is a solid or a liquid that can conduct electricity better than an insulator, but not as well as an actual metal. With the addition of impurities and heat, semiconductors can potentially reach the conductivity level of a metal. Before we can see Shockley’s contribution on the world of semiconductors, we must go back to why he began working with semiconductors.

Automation was an important topic of conversation in the early 1940’s. Automation is a broad topic that covers machines or robots and automatic responses. After World War II, the idea for a factory to become fully automated with an assembly line and machines that work themselves was tossed around many times. The automated machines would have to be controlled by something that could continuously enter input and manipulate the system, a computer. The problem was that the computer and machine did not use electricity efficiently due to the unreliability of vacuum tubes. These tubes were either made of glass or steel and used a vacuum to allow the electrons within the tubes to move freely. The tubes amplified the current, but they consumed a large amount of space and were unreliable.2 There was a need for a device that could heighten the electrical current in an efficient amount of space. William Shockley believed that the answer was lying in solid state physics.3

It was at Bell Labs where two members, John Bardeen and Walter Brattain, observed the effects of electricity on a piece of germanium.4 Bardeen and Brattain observed that when applied to the germanium crystals, the output was much higher than the input, meaning the electricity was amplified. Amplification occurs when the strength and integrity of the electrical current is heightened.5 This discovery led to the invention of the point-contact transistor. In the 1940’s, many people were listening to the radio any chance they could. Before the transistor was invented, radios used vacuum tubes, which meant that radios were large and not very portable. These radios weighed seven pounds and if they were portable, they needed a battery that weighed seven pounds. But they worked well and people did not mind, until the transistor allowed for radios that were much more portable, ones that could fit in your shirt pocket. For their amazing discovery, the Bell Labs team was awarded the Nobel Prize in physics.

Before transistors, the vacuum tubes were the best device to use to amplify electricity as needed. These tubes relied heavily on high power input such as heat, which made them unreliable because the tubes could break or the amplification would not be high enough. Machines would have to have a low usage of power due to the limitations of vacuum tubes. With a transistor, a low voltage input could be amplified much higher than the best vacuum tube. Since they relied on semiconductors, transistors could operate at higher temperatures, making them the obvious choice over vacuum tubes.

The point-contact transistor relied on holes around the first contact of the current. This allowed an amplification of the base current.6 Shockley was quite a competitive man and searched for a way to stamp his name on the development of the transistor. He turned to the quantum physics of semiconductors, where he increased the understanding of the point contact transistor and the electrical fields that the transistors made; but he needed more than that.

During his studies, Shockley found that by sandwiching crystals and impurities, the amplification could become much stronger and more reliable. With point contact transistors, the amplification is highly dependent on the surface material. Shockley’s new project, however, used two junctions in a single crystal semiconductor.7 This type of transistor became known as the junction transistor and created a new market. After he successfully patented his invention, many companies crafted their own variations of the junction transistor to sell. The junction transistor was extremely commercially successful and allowed for higher computation abilities on machines. His invention underlies the entire consumer electronics industry because transistors are used in a variety of machines and products.8

With the success of his product, in 1956 Shockley left Bell Labs to found his own semiconductor laboratory in San Francisco; he brought the silicon to Silicon Valley. His goal was to produce a silicon transistor, which had not been done due to the efficiency of germanium. However, silicon could offer more than germanium; in theory, silicon could operate at higher temperatures, allowing for increased reliability on the product. Shockley hired a group of young scientist to help him accomplish his goal. Unfortunately, he also had to teach them the extensive knowledge he knew about semiconductors. Shockley’s competitive nature made it hard for the group to be completely efficient. He would keep some important information from the members of his staff that he suspected to be undermining the project. Despite Shockley’s horrible management style, real progress was being made. The members of the group started to disappear as Shockley became too much to deal with, and when a few of the remaining members tried to have him removed, he abandoned the project and a few members left to start their own laboratory to accomplish what Shockley could not. Even though Shockley did not directly invent the silicon transistor, he enabled those who did.9

Those who split from Shockley Semiconductor formed Fairchild Semiconductor, which was much more successful. Within a few years, Fairchild dominated the industry with its planar transistor and integrated circuit. The planar transistor, which was made mostly of silicon, was more efficient than the simple junction transistor. With their success, the employees left Fairchild to create “Fairchildren” – many spin-off companies that also had huge success. These fairchildren formed the backbone of today’s industry sectors of computer hardware and software.10 So, from his complete lack of great interpersonal skills, William Shockley adversely created Silicon Valley.

The transistor is a staple in the computer industry; it has changed the way computers are operated and maintained. With transistors, computers are more efficient and use less space. In the modern computers used today, the hardware relies heavily on the use of transistors. Inside a micro processing chip, the chip that runs and maintains the computer, there can be many miniature transistors. A laptop is designed to be space efficient, while still having the computing power of an average personal computer, this would be impossible without transistors and the power that they bring to the table. One of Intel’s newest releases, the i7 core processor has over 100 million transistors inside of it, and that is just one piece that goes into a collection of parts within a computer.  Without William Shockley and the team at Bell Labs, the computer world would not be the same.

Very interesting article. Easy to understand and it is not too long. I didn’t know Silicon Valley was created by management and interpersonal problems. Two of the most important things on a team is communication and transparency. Shockley was a smart guy, but pride and nature sometimes can’t be controlled. The lesson I gained from this was that personal interests in any project can make you lose focus on the goal and delay progress.

What grabbed me initially about this article was the title, it was very “eye-catching” and as i read through it, all the details and dense writing about a new topic to me really hooked me. It always amazes me to see the times that advancements such as this one were happening, and how much these advancements have helped in the bigger picture to progress to what we have today in modern technology. Having knowing nothing about transistors, how they work, and the history of them, this article was packed with lots of new, helpful information.

Shockley’s shocking work revolutionized the world. His application of transistors into computers, and his discoveries of the uses of silicon in technology brought Bell Labs a Nobel Prize in physics. This innovation by Shockley modernized the way computers and technological devices worked. Also, it is due to this man that radios became smaller, lighter, and more portable. This article is very well-written and it definitely emphasizes the severe impact Shockley had on Silicon Valley and the rest of the world. The author of this article accomplishes to expound clearly every concept of advanced technology that are not easily understood by the public. With this in mind, it becomes easier to understand Shockley’s “shock” on modern-day society and his revolution on technology.

What a great piece that taught me something about Silicon Valley. I think it is great that Shockley unintentionally created Silicon Valley, a hub for the improvement of technology. This articles taught me a little bit about computers and what makes them up. Understanding the importance of transistors, I wonder if there is a way to improve them, but then it would be Shockley’s story all over again.

The author of this article did a great job defining things that may have confused people who have little to no background in the world of circuits and physics. By doing so, it helped keep me as the reader engaged because I had a now basic understanding of semiconductors and how automation was integrated in the 40s. I also liked how the author included the fun fact that Silicon Valley was coined due to this. It would have been interesting to compare Shockley to Bill Gates, Steve Jobs, or Elon Musk – all geniuses, but the differences in how they knew to capitalize off their brilliance.

One man and his need to keep improving technology made a revolutionary discovery that changed the tech field forever.I guess lugging around a fourteen pound radio was getting a little old. Not only does the transistor make tings not as big, bulky and heavy, but it makes it reserve power to maximize its battery life. This article really opened my eyes to the technology I take for granted every day. It is very well written and thoroughly explained how something as small as a transistor has changed technological advances forever.

I have always liked technology and this article was very interesting. It was interesting how we have come a long way from having radios weigh seven pounds to radios inside our phones. We went from computers the size of whole rooms to computers that have more power than the older ones and they can even fit inside our hand. The way that people come of with these new ideas are crazy and how sometimes they just come to them without thinking about finding a new way for something.