Religion of the Aryans: The Four Vedas 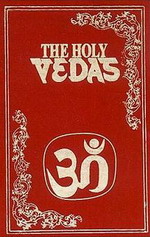 The Aryans were a tribal and nomadic people whose origins may have been in the Indo-European homelands of southern Russia. Aryans were fierce warlike people who referred to themselves as noble.1 They used this term to distinguish themselves from those they conquered. Many viewed themselves as superior, and maintained this identity by being fierce. Their warlike nature allowed them to preserve their Vedic religion. Aryans believed in several gods, and they brought their religion to the regions in which they settled, namely to northern India starting around 2000 BCE. Scholars claim that the Vedic religion of the Aryans forms the basis of Hinduism.

Although the Aryans worshiped several gods, they did not worship the same gods. Some of the gods that were worshiped in the Aryan religion were Prithivi, Indra, Surya, Vayu, and Agni. Prithivi was the goddess of the earth. Indra was the god of weather and of war. He was called the “breaker of forts” and was what the Aryan men believed a man should be like, namely, a warrior that has courage and energy. Surya was the sun god. Vayu was the god of the wind. Agni was the god of fire. He was the intermediary between the gods and humans. The Aryans believed that the god Agni ate the animals that were burned during their rituals. These sacrifices were carried out by their priests to acquire gifts from the gods, like having children, of obtaining wealth, living long, and being successful in war.3

One of the Aryan religion’s most meaningful rituals was the soma. Soma was a drink that was extracted from the celebrated soma plant described in the Rig- and Sama-Vedas. The ritual has been called the drink of the gods and the elixir of immortality. The drink was extracted from the plant by pressing or crushing the stalk of the plant using a mortar and pestle or pounding the stalks between two stones held in the hands. The extracted drink was then used as an offering to the gods or for drinking. When offered to the gods, they believed a person would gain a healthy long life, happiness, courage, strength, wisdom, and victory over enemies. When used as a drink it was believed to give the drinker understanding and creativity. The drink has also been called the procreator of thoughts as it prevents sleep and keeps the drinker awake and alert.4 The Aryan religion’s beliefs and practices have been the subject of considerable amount of research and debate. Perhaps the most debated aspect is how Hinduism developed from the Aryan religion. The Aryan Vedas are the oldest scriptures of the Hindu religion.