“She’s the Man”: The Reign of Queen Hatshepsut 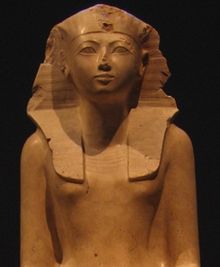 Queen B said it best when she sang the infamous line, “Who run the world? Girls.”1 When looking back to history, men are seen as better and treated better than women. A long time ago, in ancient Egypt, women of the royal family served as guides to young male rulers. But there was one unconventional case where a woman defied the odds and obtained the role of pharaoh.

Queen Hatshepsut was the oldest daughter of Thutmose and his Great Royal Wife, Queen Ahmose. Thutmose, like most males who held power during those times, had another wife with whom he had a son. His name was Thutmose II; when he was at the age of eight and Hatshepsut was thirteen, they were wed, despite the fact of their shared blood line. When their father passed, Thutmose II assumed the position of pharaoh. While he was pharaoh, they birthed a daughter, but every male in power needs a male heir. Since she was unable to produce a son, he and a minor wife, Iris, conceived a son who became Thutmose III. Thutmose II and Hatshepsut reigned in Egypt until his death. The next male in line was Thutmose III,  but Hatshepsut’s step child was too young to fulfill the position of pharaoh, so she ruled in his stead. On that note, even when he did become old enough to rule, she refused to turn over the power to him, and she remained in power. That is when she began her transition from Queen Hatshepsut to Pharaoh Hatshepsut.2

The Queen herself had a headdress made that included a beard and some male characteristics.3 She did not go out of her way to keep her gender a secret, for she did include feminine touches to her attire. Masculinity of course was respected more and was associated with power, which is why she sometimes took on such characteristics. Despite being a female ruler, at that time (and still today) people would not expect such a flourishing reign. Beginning  in 1473 B.C.E. and ending in 1458 B.C.E., under her control wealth was accumulated. When it came to the protection of Egypt, she engaged in successful warfare against her invaders.  She also had an extensive building program in which a temple of devotion to their sun god, Amun, was erected. Prosperity and wealth also came about because she sent ships on expeditions to foreign lands to obtain riches. These included ivory, ebony, gold, and trees. Now, why would they bring back trees? Whenever they had temple ceremonies, trees would be burned by the tons for fragrant incense.4

All good things must come to an end, and this particular ending is death. After she died, successors attempted to erase the fact that a female had become pharaoh.5 Even with this attempt to erase history, she is still known as a successful pharaoh to this day. She brought about protection, prosperity, and plenitude during her time as king. She did not serve as a guide to a young male pharaoh, but she showed how one must rule during her reign.