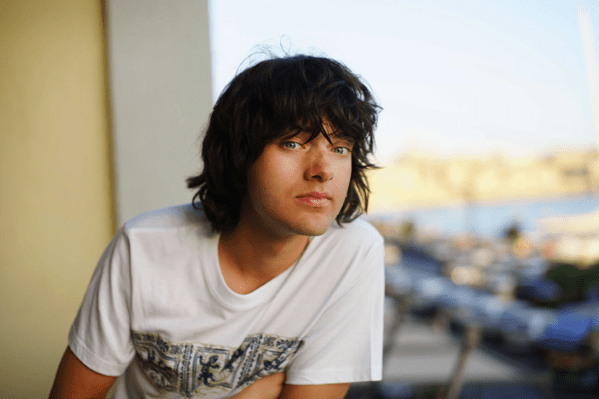 “For society to progress, we should not only move forward but also cleanup after ourselves.”1

Over the last forty years, our oceans have been filling with tons of plastic debris. The plastic is carried by the ocean currents and it all converges in five major accumulation zones, commonly called “Garbage Patches.”2 Many scientists predict that if this problem is not solved, there will be major consequences. Garbage will block the sunlight in the oceans, resulting in many species of sea plants and animals dying. Moreover, the environment will be affected in such ways that the entire food chain of the world will suffer major changes. Dutch inventor Boyan Slat has come up with an idea to solve this problem.3

Boyan Slat is a 24-year-old Dutch inventor, who has been interested in engineering projects since he was very young. At the age of fourteen, he even set a Guinness World Record by launching 213 water rockets at the same time.4 When he was sixteen, he went diving in the waters of Greece and was so surprised to see more plastic underwater than fish. That was the moment when Slat began the idea of cleaning up the ocean. Over the last forty years, millions of tons of plastic have entered the oceans creating huge garbage patches. The largest such patch is located between Hawaii and California. After his trip to Greece, Boyan became obsessed with this problem. During high-school, all of his science projects were about understanding this problem and trying to solve the “million-dollar” question “why this cleanup is considered impossible?”5

After high-school, Boyan was invited to TEDtx to tell the world his idea. At first, his ideas didn’t seem to be really interesting to the public, so he went on with his life. He started working as an aerospace engineer in TU Delft, but he just couldn’t let go of his idea. But the simple thought of not being able to come up with a solution to this major problem was killing him. He was thinking about the terrible consequences, in several years, for the planet if no one did anything.6

After several months he came into the spotlight again because some news sites had picked up his TED speech and became interested in his story. Slat even dropped out of college to pursue his dream.7

He had always enjoyed solving problems and puzzles. But this time was going to be different. This time the puzzle was to get rid of the plastic in the oceans. He just had to find the perfect pieces to accomplish that. At the young age of eighteen, he founded a non-profit organization called The Ocean Cleanup, in order to develop new technology to tackle this almost impossible task.8

And this is when the real adventure began for Slat. Instead of picking up all the plastic bottles with nets, which according to experts it would cost millions of dollars and take thousands of years, his idea was to use the power of natural currents to gather plastic into long floating rubber barriers. But developing this great plan wasn’t an easy task. It required money, time, and many experts in different fields. In an interview, Slat said “When I started, I thought I would likely fail, and I still might, but considering the scale of the problem, it was important to at least try.”9

His ideas started coming together when several experts, such as engineers, oceanographers, recycling companies, and scientists volunteered to complete a study, which ended up indicating that the The Ocean Cleanup project had a feasible and viable method for removing large amounts of plastic. But this was only the first step. Slat still needed a lot of money to start the project. So his next step was to take his story and project to the rest of the world. He has since gained the support of 160 countries, 38,000 funders, and collected over 2 million USD. With this money, he was closer to accomplishing his dream, but, again, this was just another piece of a big puzzle.10

Later, The Ocean Cleanup started developing prototypes, then getting into trials, failing and learning from mistakes, and finally the got it right. They mapped an area of 3.5 million squared kilometers of plastic and marine debris, known as the “great pacific garbage patch.” After that, Slat gave an interview arguing that most people had an image of this patch as an island where you can practically walk on, but that couldn’t be more wrong. It stretches for millions of kilometers and it would take thousands of years to clean it up.11 So he targeted that area to clean first. The first Ocean Cleanup system was launched on September 8, 2018. He is hoping to clean up to 50% within five years.12

This amazing story is only getting started, so if you want to follow the progress of this project, you can follow their official organization page (www.theoceancleanup.com).

When entering college my first year I had taken a SMC others course. Here i learned in a very extensive way about the oceans and the “Garbage Patch”. It sickened me to know how much pollution we have in our oceans. The Oceans are so important, even more so the marine life that lives in our oceans. We need more people in this world like Boyan Slat, he is trying to make a difference in something so big. I also learned about how the pollutants pulled from the garbage patch was turned into art in different areas around the world.

Getting to know the life of Boyan Slat in the article grasps a great reflection about how passion can definitely be set into a reality if we let it. The article ,Solution to “Garbage Patch” five times larger than Texas, reveals the main topic to be important to the life’s work of Boyan Slat. Therefore, demonstrates to the reader, in a unique way, to have Slat be the one to compliment the main idea of garbage patches. It is notable how we understand how Slat becomes competent to the task that people often times deceive and even lack the awareness of garbage patches; it’s clearly a concern to everyone because it is the determining factor to our quality life and this article demonstrates this idea well.

I have seen the documentary called ‘The Plastic Ocean.’ It’s a real good one pointing out each issues related with the plastic, how it affects the aquatic life, how big problem it is, what are the possible solutions and so on. The immensely growing plastic waste is one of the major problems in the world. I am so glad that you came up with an article that says about an ongoing social issue which need to be addressed. Hopefully the ocean cleanup system will clean 50% of the ocean plastic in 5 years. Congratulations for the great work.

This article was a great tropic. I have heard about this guy before and his ocean cleanup plan. Cleaning up the ocean is one of the most important things. There should be more people like him who are determined to clean the environment. I think what he is doing is good, and it is going to pay off in the long run.

I heard about the Ocean Cleanup but didn’t know who started it and the story behind it. I really like Boyan and what he is trying to do with his project. It was interesting to see how ambitious he was at such a young age. He was only eighteen and was already trying to make a change in the world. It’s also crazy to think that he was able to make a significant impact on the clean up of plastic on the earths oceans.

It is truly stunning to see how much plastic and garbage is actually out in the oceans and how big of an impact it can have on the earth. People should be more aware of how big of an effect plastic has on the environment and on organizations like these that are focused on cleaning up the ocean. I don’t think people are really aware of the bigger picture when it comes to plastic and where it really goes and how it can change ecosystems around the world in the years to come.

I think that it is really cool that he used his passion of engineering to help the world become a better place. I wonder with even more advances in technology if maybe at some point we will be able to clean an even larger amount of plastic, before it has detrimental effects on the human race. Because the fact that we are able to clean up 50% of a large space in five years, I think is huge. So I hope, maybe some day The Ocean Cleanup or someone else will be able to come up with an even faster way to cleanup all the plastic.

The amount of garbage in the oceans is appalling and disgusting. Hearing about this young man and his mission to save the planet is inspiring and gives me some more faith in humanity than I had before reading. The Ocean Cleanup has an amazing goal to help the ocean. I have great hope that the project will be successful and make a good impact.

In highschool I researched the Great Garbage Patch for a research paper, which was years ago. It is so devastating that the Great Garbage Patch is still such a large environmental issue. This environmental issue has caused a chain reaction on the environment around of us. It is an issue that we must tackle as one huge group to clean up the mess that we have made on this planet so future generations can still inhabit here. I commend Boyan for his efforts towards the clean up project of our ocean.