“Stupid Cupid, get your mom off my back”: Cupid, Psyche, and Immortal Love 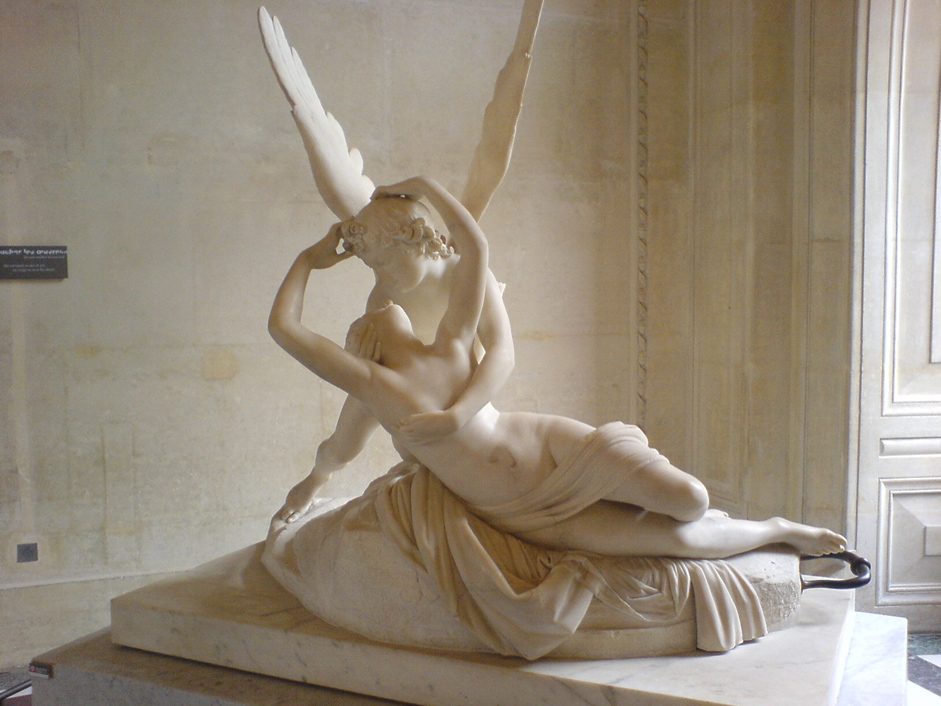 Armed with a powerful bow and a collection of threatening arrows, Cupid was the Roman god of love who was constantly affecting the emotions of his many fellow gods. Originally the mythology associated with Cupid was from the Greeks. “The god the Romans knew as Cupid was adapted from the Greek god, Eros.”1 On any occasion, whenever one was struck with one of Cupid’s golden arrows one would fall in love with whomever Cupid wanted. However, if one were struck by an arrow made out of lead, one would be repulsed by whoever Cupid decided.

One of the most acknowledged myths about Cupid, written by Apuleius in his Metamorphoses, involved the mortal princess Psyche. There are many other versions of this story, and in most of these Cupid is portrayed to be a passionate lover. “Cupid and Psyche, is … a tale of the quest for divine knowledge and the failings of the human spirit.”2 When Venus, Cupid’s mother, first met Psyche, who was a beautiful young woman, she realized how jealous she was of Psyche, and ordered Cupid to use his arrows to ruin her love life. Venus demanded that Cupid shoot Psyche with an arrow, so that when he strikes Psyche she must be looking “toward a creature so hideous that mortals will be filled with loathing.”3 While Cupid was getting ready to strike her, he became fascinated by her elegance; he lost hold of his arrow and ended up hitting his leg. From this moment forward he did whatever he could to make sure that she would be his forever. Zephyrus, god of the west winds, came as an accomplice to help Cupid. They took her to a grove of trees, which she saw as a superior palace. After entering this lavish but skimpy palace, a voice invited her to eat in what was said to be her new home.4 She received noticed that her supposed morbid lover would be there to meet her at nightfall. The voice declared “I am your husband. I will visit with you every evening but, unfortunately, I must leave before the first sign of morning. Never, ever ask or try to see me!”5

For a while Psyche was satisfied with this platonic love with Cupid, not knowing who he was, but simply believing he was her destined lover.6 Although she became accustomed to this new lifestyle, she found herself missing her family. Cupid, her after-dark lover, granted her permission to have her sisters join her.7 Unfortunately, rather than being grateful to see their sister, they were overly jealous and planted ideas in Psyche’s head to trick her unknown lover.8 “They suggest that her lover is a serpent who changes into the form of a youth at night, a monster who will at last devour her.”9 They told her to have a knife and lamp with her while she was sleeping so that when he came for his nightly visit she would be able to slay him as he sleeps.

Naively, Psyche prepared herself to see a man who she had fallen hopeless for. Ready to strike him, she brought the lamp close enough to see him.10 When she looked at this beautiful young man, she became defenseless. He awoke to see her paralyzed by what she had seen. “With the warning that love cannot live with suspicion, he leaves the palace.”11 Psyche woke up to find that the palace had been dispersed, and she went to search for her forbidden lover. Cupid decided to take his anger out on her sisters by leading them to “the arms of Death to welcome them.”12 While Psyche searched for some answers, she was turned away by everyone, finding herself confronted by Venus. Instead of Venus killing Psyche, she decided that the best thing to do would be to keep her as a slave.13

In order for Venus not to kill Psyche, she decided to let her live only by having her complete a new task for her everyday. “Psyche’s first task is to sort a huge pile of mixed seeds and grain into separate heaps, with the warning that if there is so much as one seed in the wrong pile she will be punished.”14 Psyche took forever to complete this tedious task; so Cupid decided to intervene, and he demanded a myriad of ants to finish it off for her. For whatever odd reason, she was asked to put together a golden fleece for Venus from all of her sheep. Psyche was frighten to attempt this in the daylight, so she stayed up until all had fallen asleep.15 After having succeeded at that task, Psyche was then challenged to go the river that flowed around the mischievous underworld, to fill up a jug with black water. Cleverly, Cupid came to rescue his mortal princess, and had an eagle fly to get and bring back the water for her. Venus accepted the water but planned that her next task would be to kill Psyche by having her travel to the land of the dead. She was told that she needed to acquire a bit of the dazzling goddess Proserpine in a golden box. Venus made a compromise that if she completed this task, already knowing Psyche would not survive it, she would treat her better in the future. Psyche realized that this task was an impossible one, and despairing, she decided to commit suicide. Before doing this, a voice told her that there was a way for her to complete this unattainable task.16

Believing this voice that had guided her in the past, she attempted to accomplish the task. She followed all the steps she was given.17 Thinking she would be able to obtain whatever remained in the box, she decided to open it. Needless to say, she ended up falling into an unconscious sleep brimming with nightmares.18 Without Cupid coming to her rescue, she could have been trapped in her sleep, tormented, forever.

After having sent Psyche with the box to his mother, Cupid then began to beg with Jupiter for Psyche to be made immortal.19 Jupiter decided to let Psyche join them in this immortal world, once hearing Cupid’s petition. There she drank a cup of ambrosia that Jupiter handed her, and became an immortal goddess.20

It was only then that Cupid and Psyche were able to remain unified for an eternal life together.