The “Answer” is you: China and Korea 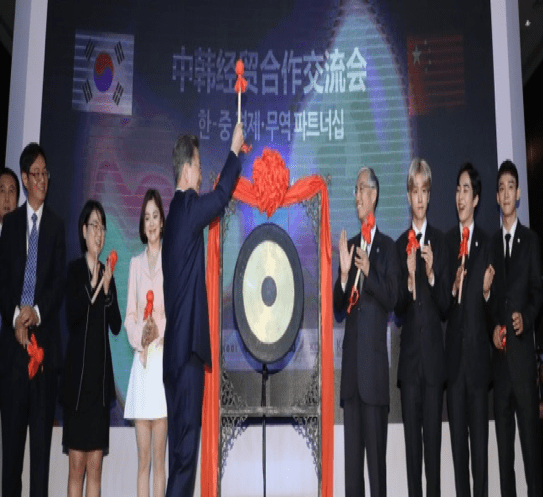 In recent years, China, South Korea, and Japan have made a motion to be friendlier towards one another. China and South Korea have made efforts to have relations that are more open. This fostered cultural exchanges between the three countries. However, a couple years ago, tensions between North and South Korea were revived with the installation by the United States of the Terminal High Altitude Area Defense system (THAAD). The  threat THAAD presents also cooled relations with China. The THAAD system lead China to restrict access to Hallyu also known as Korean Wave Music.

“Korean Wave” is the flow of South Korean entertainment that started in the early 1990s and created a music genre specific to South Korea. “Kpop” (Korean Pop) was pioneered by artists such as BoA (Korean female singer), H.O.T (early Korean male group), and DBSK also known as TVXQ (another Korean male group). Since 2015, China and Korea have had a steady exchange of culture and relations through entertainment. EXO’s group member, Lay became a youth Ambassador for China while promoting with his Korean music group, EXO.1 His promotions which include album releases, commercials, and movies are done under his individual name in China and through EXO in Korea. The work of Zhang Yixing and EXO serve as a testimony of the impact the flow of cultural icons and they work between the two countries. The Korean Wave includes both art and entertainment. Its popularity fosters cultural exchanges between the citizens of China and South Korea. The success of groups such as EXO, Big Bang, and GOT7 helped to open dialogue.

Although citizen opinion is positive, China had become determined to change this. The implementation of the Terminal High Altitude Area Defense (THAAD) system in South Korea lead China to react negatively. THAAD is a defense system against medium and intermediate range ballistic missiles. Issuing of the THAAD system worries China because it downgrades Chinese security capabilities.2 The reason is quite simple: the THAAD system has a radar build in that enables it to seek out medium and intermediate range missiles in flight and this radar can also have a second function to help discover missile locations on the ground in China which gives the United States a strategic advantage  in case of war. This removes China’s ability to keep their missile locations hidden putting them at a major disadvantage. This disadvantage is only amplified by the close proximity of these countries. China and South Korea sandwich North Korea and the Yellow Sea. This proximity is exactly what made the THAAD system necessary, so that it can block missiles that pass over the Yellow Sea or ones North Korea.3 Until then, South Korea and China had some interactions, but North Korean aggression has prompted South Korea to utilize the THAAD system through their American ally.4 The South Korean government in conjunction with the United States began construction in the area surrounding Seongju and completed the work in September of 2017. China has become hostile towards the South Korean government because of many Chinese officials viewing THAAD’s deployment as a sort of betrayal.5 This became evident when the Chinese government did not send high-ranking officials to attend the South Korean Embassy’s National Day reception in 2016. Another example came when the People’s Republic of China suspended high-level talks between the two countries and postponed the visit from the South Korea’s defense minister.6 Asian culture requires a very high level of respect which is usually displayed during important events such as these. However, the actions of China towards South Korea have shown increasing tension between the two.7 This has had a negative impact on diplomatic relations and took a toll on cultural exchanges when China banned Korean entertainment. Korean TV shows that were aired in China were abruptly stopped, faces of Korean actors were blurred out, and Korean names were replaced with Chinese ones during the ending credits. Many Kpop bands had to halt events such as concerts and tours, while Korean film and TV copyright sales decreased in China.8 These were quite drastic censorship measures aimed at erasing all Korean presence in China.

Meanwhile in South Korea, the President, Moon Jae-in had used Kpop’s regional popularity to foster diplomacy. He gifted an autographed EXO album and video message featuring Minho of SHINee to the first daughter of Indonesia during her wedding. This gift helped Indonesian relations with South Korea prosper.  This form of diplomacy had also been applied to their Chinese relations. One group with a huge influence in China is EXO. As mentioned before, one member of the popular South Korean boy band, EXO is Chinese and China named him as Youth Ambassador. Zhang Yixing (Lay) is currently promoting in China while proudly representing the Korean group. EXO also consists of a sub unit called EXO-CBX which is comprised of members Chen (JongDae), Baekhyun, and Xiumin (MinSeok). This unit alongside Korean actress Song Hye Kyo (Descendants of the Sun) were used in President Moon Jae-in’s plan involving China.9 The Korea- China Economic and Trade Partnership Forum, President Moon Jae-in deployed the use of Korean idols to warm tensions between the two countries. Sub-unit CBX and Song Hye Kyo made guest appearances during this meeting and used their charm to win the hearts of important Chinese diplomats, thus allowing for a more neutral surrounding while dealing with important trade issues. Since, China and Korea had made steady efforts to increase their future relations in a positive manner. All of that was abruptly stopped by the installation of THAAD!

“We are one!” is the slogan of EXO which perfectly encompasses the model for South Korean-Chinese aspirations. Both countries want to move towards relations that are open and have a policy centered on their common ground. The Hallyu Wave provides this very needed common interest. Although  THAAD put a stain on Korea and China relations, the efforts of President Moon Jae-in and the use of media outlets for music and entertainment can foster a comfortable diplomatic setting post-THAAD. With increasingly steady relations between the two, the past may become a “Walk on Memories”.10

In addition to improving Chinese relations, South Korea recently revealed the use of Kpop idols such as Red Velvet, and popular vocalists such as Cho Yong- Pil, Lee Sun- Hee, in addition to rock singer Yoon Do- Hyun and Singer Baek Ji- Young helped warm relations with North Korea.11 Although unification is not currently on the horizon, a joint summit between North and South Korea is scheduled for the 27 of April of this year and a possible meeting of Kim Jong-Un and President Trump in May.  South Korean K-pop seems to be a “Transformer” [pun intended!] for positive relations for South Korea. 12