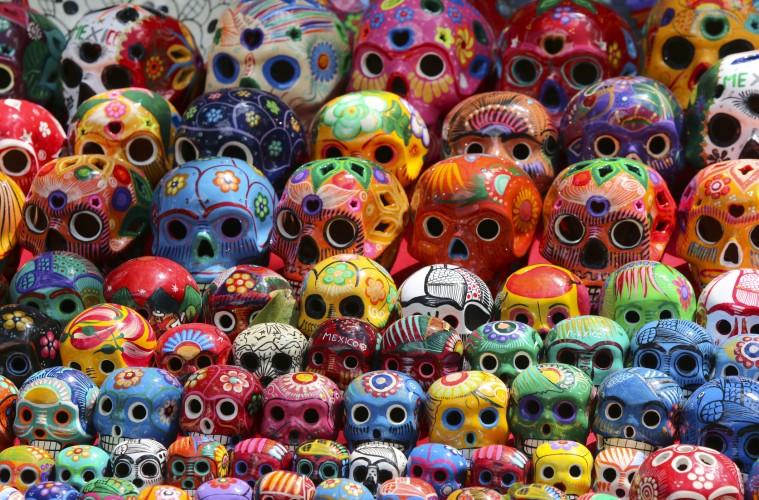 Many people know of the Mexican holiday Día de Los Muertos, which is filled with vibrant colors and intricately painted faces. What many people don’t know is that this holiday originated over 3000 years ago with the Aztec empire. The Spanish Conquistadors first recorded a Día de Los Muertos celebration during the 16th century. When the Aztecs had begun this tradition, they weren’t remembering loved ones who passed, but they were worshiping the queen of the underworld and protector of the dead.1

Despite that the name Día de Los Muertos translates to Day of the Dead in English, the holiday is actually the celebration of life. Día de Los Muertos doesn’t focus on death and mourning of a loved one. It’s seen as a happy celebration where family members of all generations, deceased and alive, can be together as one. The traditions of this holiday have changed from honoring the queen of the underworld Mictecacihuatl to honoring those who have passed.7 It’s a time of colorful festivals and parades, beautifully painted colorful skulls, marigold flowers, decorated ofrendas, grave site visits and the smells of traditional Mexican foods and incense in the air. Although it is primarily celebrated in Mexico, some parts of the United States, especially cities and towns on the Mexican border, have adopted the tradition and celebrate the remembrance of their deceased loved ones.

My family and I have never really celebrated Dia de Los Muertos but I do know about it and believe in it. I like how people don’t see death as this horrible depressing thing but this day we celebrate it and believe all of our ancestors are here with us. I’ve seen many movies and shows that talk about it and it’s nice to see how this day is portrayed in so many ways.

This article was very interesting. I did not fully know the origins of the Dia De Los Muertos, but reading about it made me realize that it is more than what I had learned about and celebrated. I found it interesting that the king of the underworld had a wife that would watch over the bones of the dead. I also found it interesting that in order to make life again the bones had to be stolen…. I also didn’t know that the Spaniard’s mixed the day with Catholicism. Over all, this article was very interesting and I enjoyed reading about it.

The most impacting fact of this article was how El Dia de Los Muertos is involved with Catholicism. My whole life I believed this Mexican celebration was an act of some kind of evil. This article opened my eyes so much, now I understand people that celebrate this day are trying to commemorate their beloved ones that passed away. Spanish people nowadays have changed this holiday a lot and it has become an enormous celebration especially in Mexico.

El Dia de los Muertos is very important to our culture and it is definitely a tradition worthy enough to pass down to the next generations. Even though I am from Mexico, I hadn’t heard of how the tradition started or how it adapted to Catholicism. The only thing I knew is that it is a day to remember the dead.

If the Spanish had not mixed Catholic beliefs with this practice would the Aztec human sacrifice continue? The Aztecs were well known and documented as sacrificing humans to their gods. The Spanish probably were horrified when they observed the Aztecs practicing human sacrificing – I’m sure a few Spaniards were led to the top of the sacrificial altar. This observance is darkness and the real god is Satan who is being worshiped. “And no wonder! For Satan himself transforms himself into an angel of light.” 2 Corinthians 11:14

Woah such an interesting article! I honestly had no idea that the Aztecs started this, let alone that the tradition was very different than what it is now. I had no idea it was the Spanish who changed everything and that catholicism also changed that tradition. I mean I’m not surprised because some Catholics hate it when others believe in different beliefs and they want everyone to worship their god.

This is a very interesting article to read. I didn’t know that “Dia de Los Muertos” was different from how it is celebrated today due to the Spanish conquistadors and Catholicism. I love how at the end of the article the author describes how and why Mexicans celebrate “Dia de Los Muertos,” and I think it is a very beautiful celebration because, as the author said: “members of all generations, deceased and alive, can be together as one.”

The Aztec empire did not exist 3000 years ago as the first sentence in this article claims. Perhaps other Mesoamerican cultures had similar celebrations 3000 years ago, but the Aztecs appeared less than 1000 years ago. An academic article needs to get that information right.