The Battle of Vukovar: Croatia’s Hope to Defend Their Land 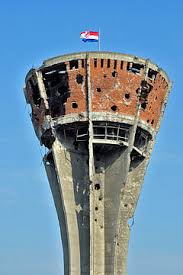 In May of 1991, the Yugoslav People’s Army (JNA) had reached eastern Croatia and the small village of Vukovar was in their sights. The JNA, with a power composed of 35,000 – 40,000 men, was ready to attack the village. However, the Croatians, who did not have an actual military at the time, did not flee. The Croatian side had 400 national guardsmen, 300 police officers from Vukovar, and 1,100 inhabitants of the small village and surrounding areas. Only half of the Croatians had hunting rifles and a few hundred anti-tank rocket launchers to defend themselves with.1 Taking the amount of manpower and weapons into perspective, the JNA had a clear advantage over the Croatian defenders.  How did it ever get to this point of absolute chaos? Did it have a detrimental affect on the Serbians in the long run? Why didn’t the citizens of Vukovar run when they could?

The tension between Croatia and Serbia started in 1986 when the Serbian intellectuals of the Academy of Arts and Scientists developed the Serbian Memorandum, which responded to the humiliation by the communists after World War II after the communists had not given Serbia its own state. The Serbian government reacted to this “humiliation” by enforcing the Serbian Memorandum and claiming that wherever Serbians lived was rightfully Serbian land, which disrespected state borders.2Slobodan Milosevic, the Serbian president, took this memorandum and fed it to the Serbian people in order to gain power and support from the country’s citizens.3Slobodan Milosevic promoted this openly to his people and birthed nationalists ready to fight whoever was in the way of their land that they wanted so badly. While this was happening, Croatia wanted independence from Yugoslavia. The Yugoslav People’s Army was ready to head to battle and claim land on August 1998, starting with Vukovar. The JNA set siege into the city fighting not only its military, but its police and civilians too.4

To Croatia’s surprise, the JNA forces surrounded the city with mortars and tanks and fired upon it, resulting in many civilian casualties. After days of fire, the Serbian forces sent small amounts of troops to kill the defenders and civilians. The two sides waged war constantly for days without rest. After a stalemate, the Croatian government sent more troops to attack the Serbian garrisons near Vukovar. The attack failed. The offensive battle was in the hands of Serbia, and defense was Croatia’s only leg to stand on. The Serbian forces, angered by this aggression from Croatia, decided to send large amounts of troops into southwestern Vukovar, pushing over two thousand civilians out of their homes. However, due to a group of defenders, the Serbian forces could not march into central Vukovar. The Serbian forces could never make it into central Vukovar due to their fighting spirit and constant assurance from government supplies.5

One man played a vital role in the defense of Vukovar. Blago Zadro, a commander of the 3rd battalion of the Croatian Army Brigade, fought with his two sons at Vukovar. As the main defender of Vukovar, Zadro’s role was to protect Trpinjska Road, which led directly into the city. Defending of the road was difficult considering the lack of arms he and his men had. His group alone destroyed 60 tanks and APCs (Armored Personnel Carriers). Zadro was killed by the Serbian Forces on September 16th 1991, though his body was not found until 1998 in a mass grave created by the JNA.6

After Zadro’s death, Marko Babić took command and fought against the aggression. Babić was considered the fiercest soldier to fight under Zadro. Babić defended the northern section of Trpinjska Road where one battalion of about 30 tanks, and 30 APCs were coming in. These fell into an ambush, and were almost wiped out. As a result, an area where the fighting occurred was nicknamed the “tank graveyard”. Babić, himself, was accredited with destroying 14 tanks, more than anyone else alone. Blago Zadro and Marko Babić are both remembered fondly today by many Croatians.7

In Autumn 1991, after months went by, no matter how hard the Croatians fought, the Serbian forces with their troops, mortars, and tanks just had too much fire power and pummeled not only the Croatian people, but its town’s structure too.8 Months of JNA troops outnumbering the Croatians had finally come to an end. The Croatians had to flee from Vukovar. The buildings were so desolate and unrecognizable that it looked as if the town had gone through an apocalypse.  The JNA had taken 500-600 lives of the defenders and sent the rest towards a Serb concentration camp. Unfortunately, many of the Croatian prisoners were killed by the Serbians.9

However, the Croatians put up such a good fight that a Serbian veteran said, “They fight like lions. The Croatians’ bravery can not be denied.” Even though the JNA won the battle, the JNA mentality was severely damaged. The small number of Croatian defenders held control of Vukovar for months. Within these months, the country allowed itself to build a stronger army ready to fight the Serbian forces at its next destination. Serbia was weakened militarily, psychologically, and politically. Željko Ražnatovic, a convicted war criminal of the war who fought for the Serbians, had been angry at his men for teasing the Croatian captives and stated: “Look carefully, you fools. A handful of those people killed 15,000 of you. If I could have these people I would be sitting in Ljubljana already.”10With the amount of displeasure in the mind of the JNA, they knew it was no easy task to defeat Croatia.

The Defenders struck a chime in Croatia and Serbia stating that the Croatians were a forced to be reckoned with, which played a crucial role into the mindset of Croatia. Croatia still remembers the defenders of Vukovar to this day.

I thought this article did well to commemorate those Croatians who died defending a land they also called home. I think it is important to know that although the lost the battle, many fought for a cause they believed in, especially to the end. Some call it nationalism, but regardless it is a mindset that many people do not have nowadays. That is fighting for something you truly believe in.

Croatians defended their land with pride, passion and unity. This shows true character to unity together and fight for their home. These people even though they lost fought for what they loved and believed in. I think this is a trait that people lack in this day and age. People are more than happy to just roll over and let the bigger power win. They just give up on what they believe because it is easier.

When you have a proud people ready to defend their land at any cost you can expect to experience them fight with such great force. In many accounts, the people that find themselves in this situation are fighting with little fear of what the outcome may be in battle because if they do not otherwise do so they can expect to die. They must weigh the odds if they await their deaths or fight until their death. I appreciate that you added testimony that applauded Croatia’s effort to survive.

That is so powerful. Croatia took that way better than I had predicted before reading the rest of the article. I am sure Serbia was dumbfounded when they witnessed the fury that the Croatians fought with. Then again, what type of citizens would not fight their aggressors when they are invaded? Despite my lack of knowledge on this topic, I think that the author did well at explaining it and laying out the details of that part of history.

I had no idea about this conflict before reading this article. It is interesting that the tension that eventually started conflict began in 1986 when Croatia wanted it independence so they began an attack on a Serbian garrison. This ended badly as the attack failed and Serbia went on the offensive and Croatia was force to defend itself for the oncoming attack.

Personally, I dislike when a piece starts off with multiple questions asked by the author to the reader. Understandably, the author is only trying to get the reader to ask these questions while reading the piece, but I would recommend presenting these questions in a different way so that readers like me do not become flustered with the rapid transition to questioning. Using a spectator to ask these questions, such as a civilian or soldier on the Croatian side of the conflict, can allow you to paint the setting with their eyes and engage the reader with his, or her, speculative thoughts on past, future and present. With that in mind, my comment is merely constructive criticism and this article was a very good read. Thank you.

This was a great article that really emphasizes how even though a military engagement might not end in victory it can still be a success. The Croatians may have lost but they proved their worth against the Serbian attackers. They showed the Serbians that this would be a hard-fought battle and they refused to be a pushover.

Dear Mr Sanchez Just a few corrections. Vukovar was not a village, with 42000 habitants it classifies by all as a large town. Even now as it stands with 11000 it is a town. Second the year in this quote is very wrong “The Yugoslav People’s Army was ready to head to battle and claim land on August 1998, starting with Vukovar” and also Croatia had fully legal referendum which resulted in vote to make Croatia independent state. During the days of the siege it was a quiet day when Serbs have thrown on the town well over a thousand shells. That was the reason for non existent infrastructure in the town. I had an honour to fight alongside Blago Zadro who was not only great commander but a wonderful human being as well as Marko Babic. Also as a fact I would like to add that Vukovar would not fall on that day when it did if we had ammunition and means to fight them, the human will was never in question. It would be also necessary to add to your article about mass murders and graves which followed fall of Vukovar. ZA DOM SPREMNI

The Croatians truly defended their country with pride, dignity, and dedication. It is amazing that so few Croatians were able to hold off so many Serbians for so long. I am sure it was a shock to the Serbians to find all those Croatian people, many not actually soldiers, fighting so hard. It is wonderful to see that all those Croatians gathered when their country called and fought for something they deeply believed in.

Thanks for bringing this story to light. Stories like this tend to not reach the United States and because of that we are not able to learn about the events that transpired in Eastern Europe. It was truly inspirational to hear the story of Zadro and Babic, the fact that they had destroyed so many tanks and APCs is very impressive.