The Dr. Seuss You Didn’t Know 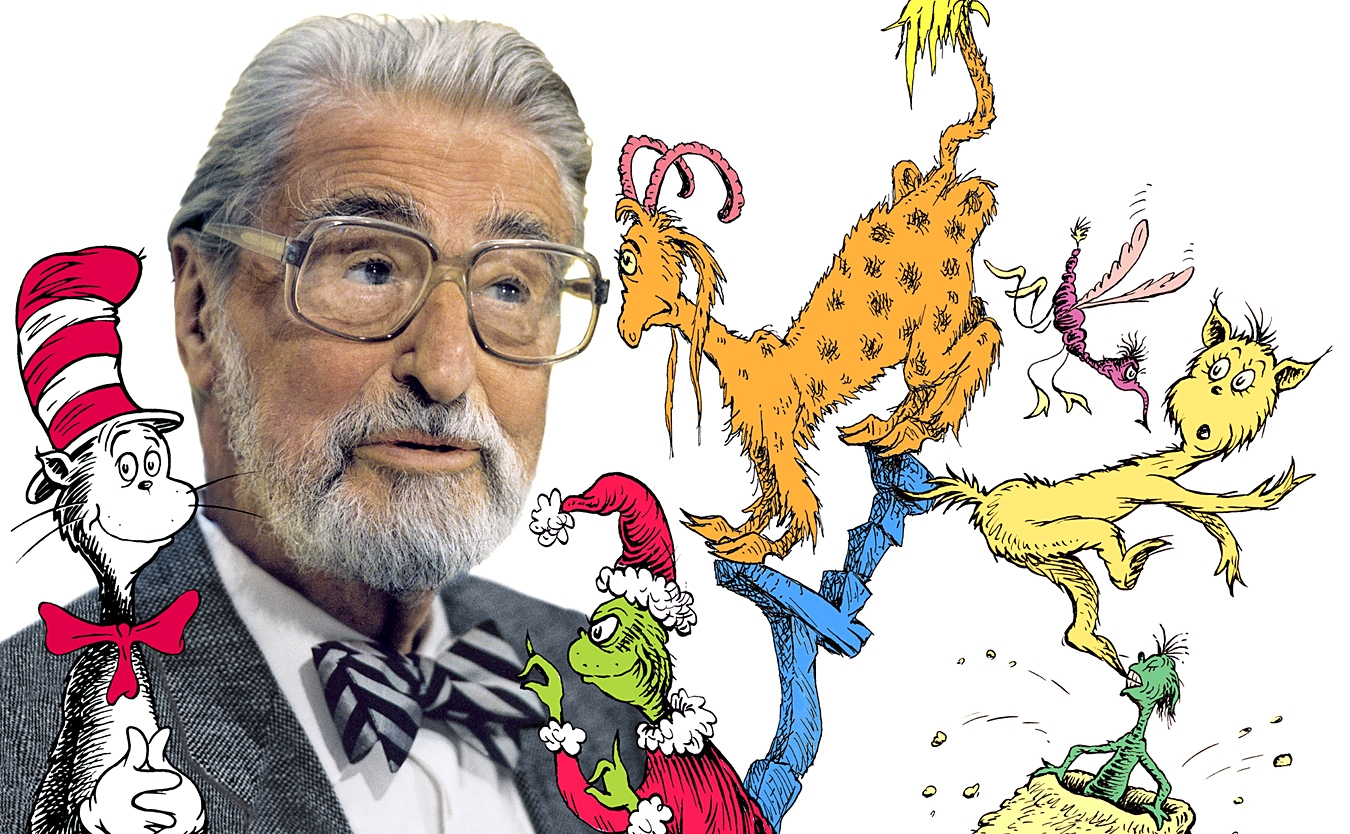 Theodor Geisel, beloved children’s author, had a life before he put the hat on the cat. Born March 2, 1904, in Springfield, Massachusetts, Geisel was the only son of German-born immigrants. He spent a normal childhood with his sister and parents, before going to college to become a teacher. Geisel dropped out of college shortly before completing his doctorate in literature. He would eventually turn his almost doctorate and his mother’s maiden name into his now famous pen name, Dr. Seuss.1

In 1927, Geisel decided to turn his passion for drawing and writing into a career in advertising. One of his early successes in advertising was his drawing for Flit insecticide, whose mascot looked very similar to the cat that would eventually wear a striped hat.2  He later created an entire campaign for Essomarine Oil, a division of Standard Oil, called Seuss Navy, in which he designed certificates of membership, pamphlets, and even ashtrays and cocktail glasses that were passed out at trade shows. The Seuss Navy ads ran from 1936 to 1941, and contained many of the sea creatures that would later appear in his books.3 Geisel used many of his made up creatures in various ad campaigns and was the first person to use humor to sell products, altering the advertising industry.4

In 1941, Geisel left advertising to work as a political cartoonist for liberal New York newspaper PM. He drew over 4oo cartoons targeting such topics as isolationism, antisemitism, and racism. He routinely mocked Hitler and Mussolini, but he had a particular flair for attacking American nationalism as well. Believing that the American Nationalist Movement was just another form of fascism, Geisel made Charles Lindbergh a frequent subject of his cartoons.5 After the Japanese attack on Pearl Harbor, Geisel began to use his cartoons to support the war against Japan. He drew cartoons that “depicted Hideki Tojo, the Prime Minister and Supreme Military Leader of Japan, as an ugly stereotype, with squinting eyes and a sneering grin.”6 Geisel was in support of Japanese internment camps and drew several cartoons about them.

It can be hard to imagine that Dr. Seuss could be a racist in his depiction of Asians, but he later admitted that this was exactly the case. At the time, PM did not receive one letter of complaint about Geisel’s stereotypical depiction of Asians, although they received many letters when Geisel mocked the German dachshund, which was popular among American dog owners. Dr. Seuss later said that his 1954 book, “Horton Hears a Who,” written after a trip to Japan and dedicated to a Japanese friend, is meant to be an apology to the Japanese people for his depictions of them during World War II. In the 1980’s, Geisel looked through all his children’s books and removed anything he felt was racist, changing them for any future publication.7

Geisel’s political cartoons ended when he joined the Army in 1943. The now Captain Geisel was assigned to a unit that made training films for the Army, working with the likes of Stan Lee (creator of super heroes) and Chuck Jones (creator of the Road Runner and Wile E. Coyote).8 Geisel and Jones would become life long friends and would work together on various projects, including the animated “How the Grinch Stole Christmas,” which is still shown every year on television.

Geisel’s first children’s book was “And to Think I Saw It on Mulberry Street,” and was published in 1937. However, his writing career almost never happened. The book had been turned down by 27 publishers and Geisel was ready to give up the idea of becoming a children’s author when he ran into an old college friend while walking down the street. His friend had recently become an editor at Vanguard Press and asked Geisel to send him the book so he could show his boss. Geisel would later say in interviews that it was pure luck that he walked down that side of the street that day.9

Dr. Seuss later claimed that he did not like to write books that had a moral or ethical lesson, because children could see a lesson coming and would not want to read the book.10 However, all of Geisel’s books, except his Beginner Books, contained lessons of some sort. Dr. Seuss wrote books with lessons on environmentalism, racial equality, the pointlessness of the arms race, materialism, and respect, just to name a few. He was one of the first children’s authors to write books for children with the respect and care typically reserved for adult literature.11

Dr. Seuss died on September 24, 1991 at his home. He was asked shortly before he passed away to leave a message for children. He wrote “The best slogan I can think of to leave the kids of the U.S.A. would be ‘We can…and we’ve got to…do better than this.’ He then crossed out ‘the kids of.'”12  Dr. Seuss left a legacy of children’s literature that will not soon be forgotten, but he did more than that; Dr. Seuss taught children to think.