The Enemy of My Enemy is My Frienemy: The Syrian Civil War 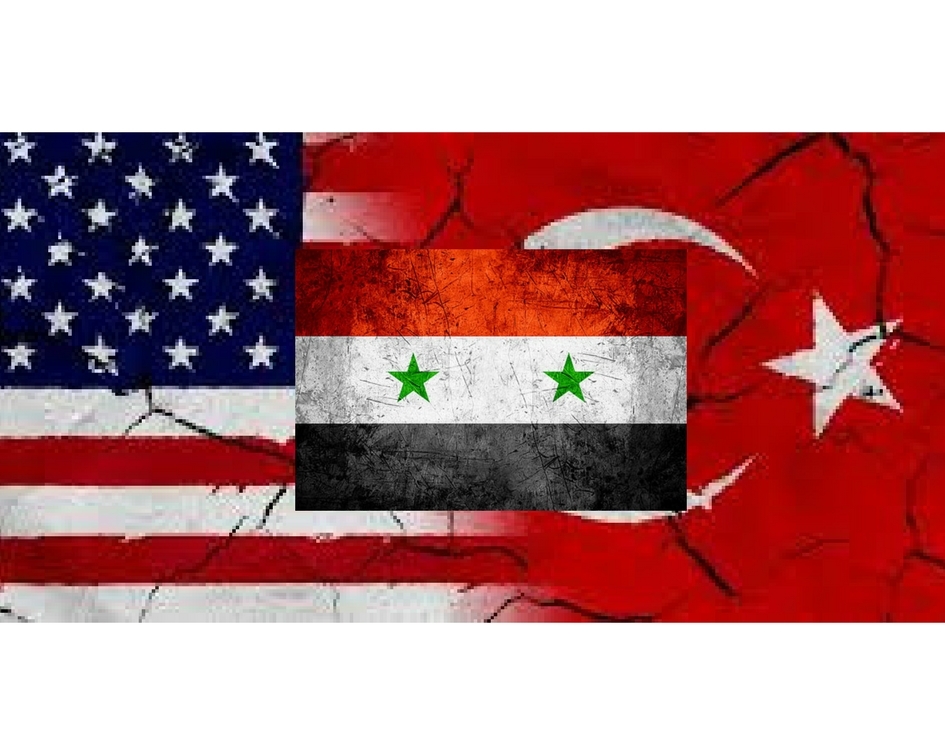 When the Syrian Civil War started in 2011 with protests against President Bashar al-Assad’s regime, it seemed like a clear-cut alliance system. Russia and Iran backed the regime but fought against the Islamic State of Iraq as well as against the Levant and ISIS/ISIL, while the United States and rebel forces allied to fight the Syrian regime and fight against ISIS/ISIL.1 The rebel forces consisted of groups like the Syrian Democratic Forces (SDF), Free Syrian Army (FSA), and the Kurdish forces, like the People’s Protection Unit (YPG) and the Kurdistan Worker’s Party (PKK). The YPG is the military branch of the Kurdish group in Syria. Turkey fought against the regime, but, in the beginning, did not directly fight against ISIL. Seven years into the war, those alliances were no longer clear cut. While the alliance between Turkey and the United States started off a little rocky, it eventually evened out, only to then become even more rocky. Scholars, such as Peerzada Tufail Ahmad and Emrullah Uslu, have seen changes in the alliance system, such that the United States and Turkey have simply made the fighting within Syria more complicated and have in the process prolonged the war. I argue that the alliance between the United States and Turkey has changed due to their similar views on the regime of President Assad, their differing of views on ISIL, and their differing views on the Kurds.

Before the war started, relations between Turkey and the United States was what one would call complicated. In addition to being NATO allies, Turkey was also considered a model for Muslim democracies in the Middle East. However, there were concerns over Turkey’s human rights violations, even though Turkey supported the United States’ War on Terror. From 2002 to 2012, Turkey worked with the US to stop the spread of radicalism in the Middle East.2

At the start of the Syrian Civil War, President Obama announced, “For the sake of the Syrian people, the time has come for President Assad to step aside.” This statement was followed by a series of financial sanctions, including the freezing of all assets of the Syrian Government and the block of all United States citizens from purchasing any products from Syria.3 However, the leader of the United States said that the United States would not be entering the Syrian Civil War beyond these sanctions unless a “red line” over the use of chemical weapons was crossed.4 “We have been very clear to the Assad regime, but also to other players on the ground, that a red line for us is we start seeing a whole bunch of chemical weapons moving around or being utilized. That would change my calculus. That would change my equation.”5

This was the start of the rocky alliance between Turkey and the United States. In the beginning of the conflict, the Foreign Minister of Turkey at the time, Ahmet Davutoglu, met with President Assad in hopes of coming to an agreement that did not involve more violence. These talks, however, did not yield any success, and so the violence continued.6

President Erdogan, Turkey’s leader, then openly shared President Obama’s sentiments in November of 2011 by calling on President Assad to “Just remove yourself from that seat before shedding more blood, before torturing more and for the welfare of your country, as well as the region.”7 Turkish President Erdogan had some resentment towards America after the hesitation of, first, not entering the war, and then second, not entering the Syrian Civil War again after the regime’s use of chemical weapons.8

In 2013, Syria conducted chemical weapons attacks in rebel-held Damascus. The attack against Damascus made by President Assad used sarin gas. President Obama had previously stated that the use of chemical weapons was a “red line” and the world believed, especially Turkey, that this would be the moment that the United States would enter the war in Syria. This was not the case. President Obama ordered a weapons strike against Assad, but decided to go to Congress for authority. This was seen as an attempt to place blame, either for the strike or no strike, on his opponents in Congress. At the same time, President Vladimir Putin of Russia convinced President Assad to listen to the Chemical Weapons Convention (CWC) and rid itself of chemical weapons. This made President Obama hesitate and eventually decide against any action, with or without Congressional support.9 It was not until 2014 that President Obama formally entered the Syrian Civil War, by sending in air missile strikes.

“We condemn in the strongest terms the horrific chemical weapons attack in the suburbs of Damascus on August 21st that claimed the lives of so many men, women, and children. The evidence clearly points to the Syrian government being responsible for the attack, which is part of a pattern of chemical weapons use by the regime.”10

Turkey had a similar reaction to the use of chemical weapons in August of 2013. In a press release, Foreign Minister Ahmet Davutoglu stated, “In the face of this massacre, which violates the international law and constitutes a serious crime against humanity, we call on the UN Security Council to fulfill now its responsibilities stemming from the United Nations Charter.”11

Another key series of events that further complicated the relationship between Turkey and the United States was the Turkish government tolerance for Jihadists, which are Muslim militants rooted in Islam. As previously stated, Turkey was a big player in the War on Terror until 2012. However, Turkey began to allow Jihadist groups to live in refugee camps and cross through Turkish borders into Syria. Despite the alliance between Turkey and the United States, Turkey’s quiet form of support for the Jihadists was an open secret.

At the beginning of the Syrian Civil War, Turkey allowed Jihadists to live in Turkish towns and be treated at their hospitals. Turkey had open arms for all those who opposed President Assad and those who would help in the fight against the Kurdish nation.12 In 2012, an alarming number of Jihadists were able to travel freely from Turkey to Syria. Then, at the start of 2013, arrests of Jihadists went down considerably within Turkey. The support was confirmed and undeniable in 2014, when three Turkish conveys were intercepted, filled with weapons headed for Syria. In a later interview conducted by the Washington Post, Abu Yusef, an Islamic state commander, admitted that “most of the fighters who joined [them] in the beginning of the war came via Turkey, and so did [their] equipment and supplies.”13

Beyond that of President Assad and ISIS, there was the matter of the Kurdish nation. Turkey has had a long history of suppressing the Kurdish nation, for a lengthy period of time only referring to them as “Mountain Turks.” In 1983, the Turkish government also passed laws that put restrictions on Kurdish language and cultural practices. No papers were allowed to be printed in Kurdish language, nor were any broadcasting to be spoken in the language.14

The United States, on the other hand, considers only the PKK as a terrorist group and remains firm in the belief that the YPG has no ties to the PKK. The United States has also been leading a U.S.-led coalition between the YPG, SDF, and United States forces since 2014. The Kurdish fighters have been one of the United States’ closest allies in the fight against ISIS. The coalition has taken back many ISIS strongholds in Syria, including the ISIS capital Raqqa.

By invading Afrin, Syria in Operation Olive Branch on January 20, 2018, Turkey further complicated the already complicated alliance between the United States and Turkey. Turkish forces allied with the Free Syrian Army, FSA, which was once trained by the CIA. Afrin is one of the Rojava cantons held by the SDF, Syrian Democratic Forces, and the Kurdish YPG. Turkey won the battle in Afrin, pushing Kurdish forces from the city. The President of Turkey, Erdogan, has stated that the next move for Turkey to take will be to push further into Syria to the city Manbij, another rebel held city, that has been held by the Kurds since 2016 after pushing ISIS from the city.  “We will continue this process until we entirely eliminate this corridor, including in Manbij.”17

The invasion of Syria to defeat the YPG has put the United States and Turkey on opposing sides of this part of the war. Iran has supplied the regime in Syria with troops and those Iranian backed Syrian militias have been sent into Afrin to help the rebels and Kurdish forces hold off the Turkish military, despite the intense and volatile history between the Kurdish nation and the Syrian government.18 The Turkish goal to push further into Syria will put Turkey almost directly into contact with American Special Forces. “This is what we have to say to all our allies: don’t get in between us and terrorist organizations, or we will not be responsible for the unwanted consequences,” President Erdogan has stated.19 The American forces still support the Kurdish YPG and one American military leader stationed in Manbij, Lt. Gen. Paul Funk, has stated “You hit us, we will respond aggressively. We will defend ourselves.”20

What happens when allies turn enemies? We have seen how Turkey’s fight against the Kurds and quiet support of the Jihadists and ISIL goes directly against the United States support of the Kurds and adamant opposition of ISIL. However, despite these differences, the relationship between Turkey and the United States has not been all disagreements, as both countries called for President Assad to step aside and remove himself from power, and continue to do so today. The differences and similarities these two countries have are only the beginning of a deeply seated conflict between two NATO allies. The relationship between Turkey and the United States is complicated and layered, and the Syrian Civil War only complicates the relationship more.