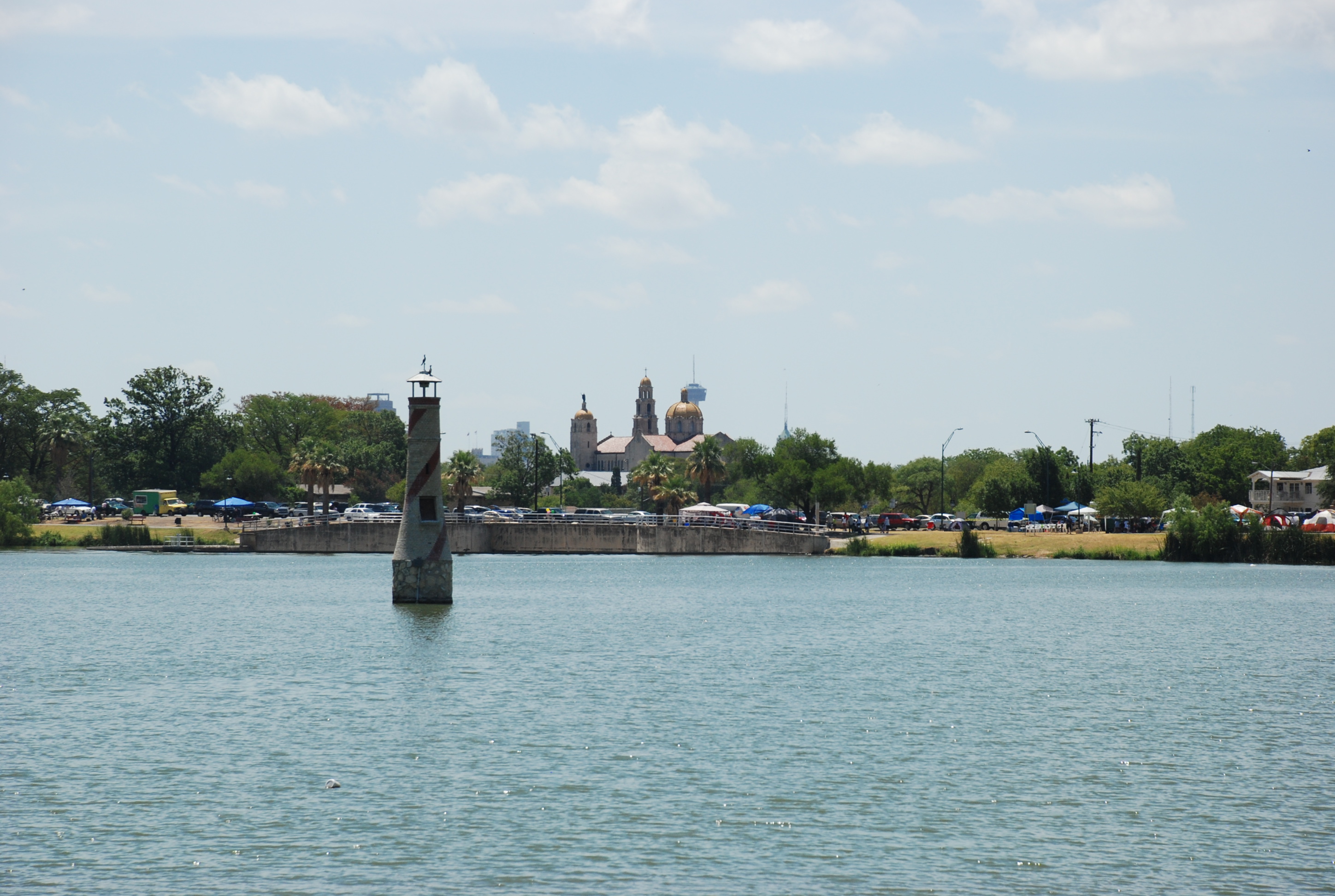 For over 100 years, Woodlawn Lake Park in San Antonio, Texas has been a place for visitors to relax or partake in community gatherings and local events – whether it be for the annual 4th of July firework spectacle or a picnic with family. Due to their vast quantity of natural habitats, many would not suspect parks to have a long or rich history. This, however, should not be assumed. Woodlawn Lake Park has gone through significant changes throughout the past century – all of which has helped it become what it is today. During the 2019 Earth Day celebration at Woodlawn Park, I had the pleasure of interviewing Alejandro Soto, the president of the Woodlawn Lake Community Association. Listening to his experiences and thoughts inspired me to look deeper into the history of the park.

The park’s history began when General W. Russ, F. H. Brown, and W. P. Anderson founded their business, the West End Town Company. They also bought the surrounding 1000 acres of land in 1887, naming it “Maverick’s Pasture.” Two years later in 1889, the 80-acre lake formed after a dam was built around Alazan Creek by George W. Russ and his company. Even throughout the early-20th century, the park was a popular leisure spot for San Antonio’s citizens, as a trolley connected the park to downtown San Antonio in Houston Street.1 With rowboats, an outdoor pavilion for people to dance and the newly invented electric bulbs, the lake had a reputation of being “the finest artificial lake in the south.”2

After going through financial hardships, the West End Town Company foreclosed the land in 1894, handing it over to Julia Anderson and F. H. Baldwin. After that, Anderson and Baldwin leased the area to the Peacock School for Boys up until 1910. After Baldwin’s death in 1918, Anderson gave the land over to the City of San Antonio. The West End Improvement Club stepped up in 1920 to renovate the park, planting a hundred trees, adding comfort stations and  renaming the place to “Woodlawn Lake.” Between 1915 and 1929, W. H. Suden, after leasing the land, added an island onto the lake. In addition, Suden incorporated film shows, rowboats, and a hotel. A $188,000 bond package allowed the city to begin building a community center alongside a pool.3

Alejandro Soto is the president of the Woodlawn Lake Community Association, a group focusing on developing the park and neighborhoods around it. Originally from Los Angeles, Alejandro moved to San Antonio in 2000. Seeing his previous neighborhood suffer because of neglect from the people, in 2003, Alejandro sought to get involved in the Woodlake Park community to make sure the same thing did not occur here. The Woodlawn Lake Community Association tackles issues such as lake drainage, street repairs and call complaints, to name a few. Littering is another problem that the group faces, especially during their 4th of July event. Alejandro believes that one of the hardest challenges they face is getting younger generations to get involved in their communities. The young are occupied with school, family and children, leaving the elderly people to be the most active.4

Throughout the 1920s and 1930s, drainage and silt began to contaminate the lake due to neighborhood and street construction in the area. Concurrently, Franklin D. Roosevelt’s New Deal program employed victims of the Great Depression to do public works around the country; one of these agencies was the Works Progress Administration. During this time, bridges, sidewalks, concession stands, tennis courts and a lighthouse developed.5 In the late 1930s, the Works Progress Administration dredged Woodlawn Lake – removing sediment and debris. The process of dredging persisted through the following decades with a dam and spillway constructed as an aid. In the early 1980s, the lake was drained for two years because of dredging. Fortunately, no issues with dredging have occurred in the last few decades. By the late 1990’s fireworks on the 4th of July sparked a yearly tradition at Woodlawn Lake Park. Finally, the city of San Antonio classified the park as a local historic district in 2000.6

Historic districts are defined by the City of San Antonio’s Unified Development Code as an area that contains a group of significant historical landmarks – which can range from buildings to natural resources. As of 2019, San Antonio has 29 historical districts and around 2000 individual landmarks. Some other prominent historical districts include the HemisFair, Alamo Plaza, Main and Military plaza, Mission (home of the Spanish frontier missions), and the Old Lone Star Brewery. Being listed as a historic district prevents the landmarks around it from being demolished by government officials or other organizations. The City of San Antonio has a detailed list of criteria that is required for an area to become a historic district, some of which includes their cultural integrity to the community and historical impact. As of 2019, there are seven areas that are eligible to be classified as one.7

The area surrounding Woodlawn Lake is also rich with historical significance. The 116-foot-tall Basilica of the National Shrine of the Little Flower, which is easily seen from Woodlawn Lake, resides nearby. Built in 1931 during the Great Depression, it was dedicated to the recently canonized St. Thérèse of Lisieux, who is nicknamed “The Little Flower.” In 1998, it officially became a part of the National Register of Historic Places, as well as becoming recognized as a Minor Basilica by the Catholic Church.8 Another nearby landmark is Thomas Jefferson High School. In 1932, it became the third high school to be built in San Antonio, costing 1.25 million dollars to construct. The high school was labeled as a Texas historical landmark and placed among the National Register of Historic Places by the City of San Antonio in 1983.9 Some of the most well recognized alumni from Thomas Jefferson High School include politicians Henry B. González, Ed Garza, and Julián and Joaquin Castro. The community around Woodlawn Lake Park is closely attached to these places, as many teenagers there attended Thomas Jefferson High School and those who are Catholic regularly visit the Basilica of the National Shrine of the Little Flower.10

Since becoming a historical district, many more people have come to visit Woodlawn Lake Park. With this comes the increased need for preservation. Alejandro is very pleased with the improvements that the park has had over the years – of which include renovating the gym and park entrances, and also creating a one-acre butterfly garden. Alejandro believes that the butterfly garden will help other people – especially newcomers – decide what kind of plants to grow and look at the variety that San Antonio has to offer. Additionally, the butterfly garden helps the passing monarch butterflies along with other park wildlife.11

Today, the park is the official gathering place in San Antonio for the Fiesta Earth Day and the Fourth of July. The park offers activities such as public fitness, dance classes, fishing, canoeing and kayaking.12 The Woodlawn Lake Community Association helps to preserve the nearby neighborhoods, creating a butterfly garden for the monarch butterflies, and working with local schools, churches and civic groups.13 Currently, the association is looking to resolve the issue of speeding vehicles, sidewalks in need of repair, and stray dogs. Residents also want more retail businesses opening up shop in the area.14

Recently, one significant change done to the park was the banning of smoking in all San Antonio parks, thanks to the efforts of the Woodlawn Lake Community Association. Looking into the future, Alejandro hopes that the city will add a bike trail around the park using existing streets without creating new pavements. The group is always looking towards improvements not only to the park, but also to its community. To Alejandro, Woodlawn lake park is a special one-of-a-kind neighborhood – one that cannot be found anywhere else in the world.15