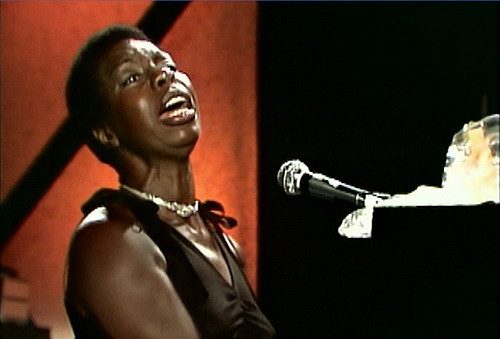 It is a jaunty ragtime melody that fools listeners into briefly perceiving the number as a feel-good pop song, yet sustains its relevance by acknowledging the continued failure of a full realization of Black freedom a century after the Thirteenth Amendment.1 It took Nina Simone an hour to write “Mississippi Goddam,” which is a song based on the place-names of oppression. It was written immediately in the wake of the 1963 church bombing in Birmingham, Alabama, where four African-American girls, none older than fourteen, were murdered while at Sunday school.

In this song, she mocked government promises, stereotypical insults, and the continuing warning of public leaders to “Go Slow,” which refered to those who would drag their feet in pushing the nation toward racial equality. This song had no intention of being uplifting with lyrics like “we shall overcome.” Instead, it is a song about a movement. A woman who did not have much to begin with and small hopes for the American future, sings, ‘Oh but this whole country is full of lies… You’re all gonna die and die like flies.”

Nina Simone never thought she was going to stay in show business. When she first got into show business, she wasn’t even a blues singer or jazz singer. She was a classical pianist who studied to become the first black classical pianist in America, and that’s all that was on her mind and what she prepared to be. She was born with the name of Euince Waymon in a town called Tryon, North Carolina, and she began to play the piano at the age of three or four years old.2

When Simone was seven, the choir in her church gave a program at the local theater, and she was on it. Two white women heard her playing some songs and one of them, Mrs. Mazzanovich, decided then and there to give Simone music lessons. For five years, she studied classical piano with this teacher. Simone would have to cross railroad tracks every weekend to get to Mrs. Mazzanovich. In the South, railroad tracks often divided the black community from the white. This scared her so much, and even more, she was terrified of Mrs. Mazzanovich in that she was white. But it was her white hair with combs in it and her pleasantness that Simone loved, which had been something alien to her. Mrs. Mazzanovich was determined to make Simone the greatest pianist. Therefore, everything was very disciplined. The songs she would play would include Bach, Beethoven, Debussy, Brahms, and … the list of classical artists goes on. Mrs. Mazzanovich was so invested in Simone that she organized a fund called the “Eunice Waymon Fund.” Simone performed many recitals, and they would further her collection to enhance her education after she left Mrs. Mazzanovich.3

However, from so much training and practicing, Simone was isolated from other children, white or black. When she would play with children, they would just want her to play the piano for them so they could dance. Another part of the isolation resulted from her color. She knew about it and lived in it for seventeen years, yet no one was allowed to speak about anything racial in the house. It was all kept inside and bundled in.

After graduating from high school, the money from the fund was able to send Simone to Julliard in New York for a year and a half. She then applied for a scholarship to Curtis Institute of Music in Philadelphia. She knew she was good enough; however, she was turned down because of her color. This really affected her and she never got over it. The money ran out and she had to find work. Simone got a job playing piano at a bar. But playing piano alone was not enough; she was told to sing as well in order to keep the job; and so she did. Since she didn’t want her mother to know that she was playing “the devils music” in bars, she changed her name from Euince Waymon to the well-known Nina Simone.4 It was a necessity for her to continue to work in order to pay for the classes she needed and become the great pianist she knew she could be.

Simone had a special connection with music. She was able to play and quickly adapt to the tune in a way that made her so unique. She had a wonderful way of taking a piece of music, and changing it to her own experience. Simone was interested in expressing herself in her music. Her voice could be described as a woman’s voice with the depth of a baritone. After performing at a jazz festival, everyone recognized that she was special. She recorded an album, “Little Girl Blue,” with eleven songs, in 1958, and the public fell in love with her version of I Love You Porgy, which had not been given any publicity or advanced expectation that it would become a hit. It climbed its way to the Top 20 Hits in the fall of 1959.5 From then on, her career went uphill quickly.

“They died in Birmingham, the nation’s most segregated big city. Dynamite exploded on Sunday.”6 This church bombing that occurred in 1963 is what did it for Nina Simone. She said, “First you get depressed, and after that, you get mad. And when these kids got bombed, I just sat and wrote this song.”7 Nina had not been involved in politics or singing political music, but after the bombing and knowing that she had a platform, she got involved. This song was very violent and moving because that was how she felt. “Mississippi Goddam.” These were words that not one black man would dare to say, but Simone did. Many people were so glad to hear her, a black woman with stature, say it, since they wanted to but never did. This song was revolutionary. However, there was no cursing on the radio or on television then, so the song was banned from being played by most media. Even DJs would refuse to play it and many LPs were cracked and broken in protest to her protest song. As the Civil Rights movement swung into high gear in 1963, Simone swung right with it.

Carnegie Hall is a concert venue located in Midtown Manhattan, New York City. This is where Simone debuted her song “Mississippi Goddam.” She was several thousands of miles from the racial turmoil of the Deep South, but she was ready to perform in front of a mostly white audience in Carnegie Hall. The crowd laughed after Simone mentioned the title of the song, until she assured them that she’s not playing. The song has an intense message with a comforting and bouncy backdrop of a show tune. It contains such furious assaults that the audience would need a bit of a breather, so she engaged in a little playful stage banter here and there.

Simone opens the song with “Alabama’s gotten me so upset, Tennessee’s made me lose my rest.” These states had been major battlegrounds in the racial struggles of black people ever since the end of the Civil War. Moreover, Alabama is where the church bombing had just occurred that killed four little girls. She continues with “And everybody knows about Mississippi Goddam,” which was in response to Medgar Evers, a civil rights activist, who had also just been assassinated in June of 1963. Evers was a major leader in the Civil Rights Movement, where he was a member of the Regional Council of Negro Leadership and at the forefront of the NAACP’s campaign to desegregate the University of Mississippi. He was shot in the back when leaving his home in Jackson, Mississippi. Simone refers to this as the match that lit the fuse. She continues having lost the ability to deal with the horrors around her, and sings, “Can’t you see it, Can’t you feel it, It’s all in the air, I can’t stand the pressure much longer, Somebody say a prayer.” Simone continues, mocking the South for their resistance to move forward with civil rights, and also condemning the strategies of the FBI’s anti-civil rights Counter Intelligence Program. She ends the song with a plea, “You don’t have to live next to me, Just give me my equality.”

In 1965, “Mississippi Goddam” was played at the Selma March in Montgomery, Alabama. This was extremely dangerous, as federal troops had been called in and were standing on all buildings with guns. Martin Luther King, Ralph Bunche from the United Nations, and other worldwide dignitaries were all seated in front of the audience while Simone sang.8 Everyone felt the song and the meaning behind it. The lyrics were filled with anger and despair and were different from the fast-paced rhythm of political music. They expressed a cultural pain and rage that everyone felt during the movement. Simone sang this song with so much anger that her voice broke that day, and it subsequently never would return to the same octave. This was her contribution to the Civil Rights Movement.

Simone was now able to let herself be heard about what she had been feeling all the time. As a child, there was never any complaining allowed about how being colored made others take advantage. But during the Civil Rights movement, she made sure everyone knew what she was feeling through the political music she continued to make. Nina Simone became an icon who refused to surrender to racism. Although she never became a classical pianist, she left an enduring legacy of jazz, blues, and protest music.