The “Shot Heard Round the World” 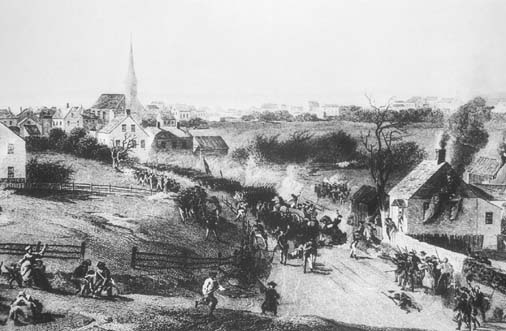 “BANG!” The first shots were fired on the village green at Lexington, Massachusetts on April 18, 1775. The British initiated the battle at Lexington, followed by Concord, Massachusetts. There were several events that led up to the Battles of Lexington and Concord, including the Stamp Act of 1765, the Boston Massacre of 1770, and the Boston Tea Party of 1773. These events illustrated the struggles the thirteen colonies had to undergo because of the British Crown and its numerous, restrictive policies. For months leading up to the war, townsmen and farmers of Massachusetts had been training and gathering arms and ammunition in order to be prepared to fight at a minute’s notice; these men were known as minutemen. Continental Congress had approved their preparations and these minutemen sat in wait for the British to make their first move.1

General Thomas Gage, commander of the British Garrison in Boston, had been aware of military preparations in the countryside. Given orders from England to arrest rebel leaders Sam Adams and John Hancock, Gage finally decided to act after learning about the large supply of ammunition in Concord. A detachment of roughly one thousand soldiers headed out from Boston to surprise the colonists and seize the supplies. General Gage’s moves were being closely monitored by the Patriots.2 General Joseph Warren, a spokesman for the anti-British rebels and a member of the committee, began to pay close attention to the British increasingly suspicious movement toward both Lexington and Concord. His attention to detail proved to be a main factor, serving to prepare the minutemen for battle. That night, Paul Revere and William Dawes were assigned to watch the movements of the British and to notify the people in the case of an advance.3 As Revere and Dawes caught sight of the British advancement, they rushed to notify the minutemen. Revere’s famous midnight ride has been immortalized ever since in Henry Wadsworth Longfellow’s poem, “Paul Revere’s Ride.”4

Now, armed with the knowledge that British troops were advancing on Lexington, Captain John Parker and his single company of minutemen stood on the Lexington village green awaiting the British arrival.5 The British arrived and shots rang out. Eight minutemen died and nine were wounded. The Patriots’ attack proved to be fatal to their own militia, but it helped slow down the British arrival to Concord. At this time word reached Concord and the minutemen were able to hide away some of their supplies and prepare for battle. As the British advanced through the ranks of British Major John Pitcairn, the Patriots stood on the Old North Bridge awaiting them. When the two sides came face to face, the first shot—known as the “shot heard round the world”—was fired. This loud statement of retaliation would be pivotal to the Americans, who were in anguish over British rule. The British retreated from Concord where they would encounter multiple surprise attacks from the Patriots.6 Neither side could have predicted that this would be the first battles of what would become the American War for Independence. The British army’s underestimation of the Americans’ resistance proved to be fatal, as they lost many soldiers and ignited something greater. The Patriots would not stop until they had independence; the American Revolution had officially begun.