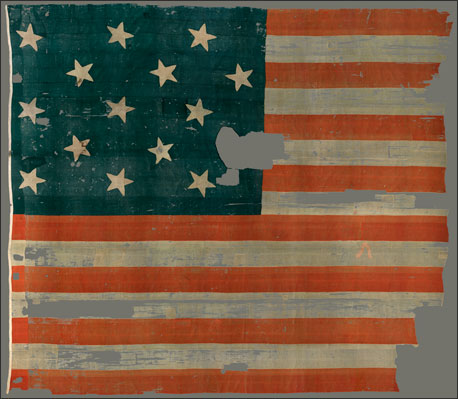 Francis Scott Key was born on August 1, 1779 in Terra Rubra, Maryland. After graduating college, Key began to study law in hopes of becoming an attorney.1 Soon after, Keys got married and had eleven children and moved to Georgetown where he started his own practice.2 Key became very successful in his work as a lawyer, and for hobbies he sang for the church and wrote poems, a lot of which are still appreciated today. When the War of 1812 broke out, Key enlisted in the US army.3

Francis Scott Key was sent to a British ship to negotiate the release of certain prisoners. Upon Key’s arrival to the ship, he showed the Commodore of the ship letters from British troops that had been captured by American forces.4 The letters explained how well they were being treated and that they were not harmed in any way. After seeing this, the Commodore let their prisoner William Beanes free, but before the three American men could leave, the British troops were preparing to attack Fort McHenry, and therefore needed to keep them on the ship so that they would not be able to return back to warn the American troops.5

For over twenty-four hours the two sides, American and British, exchanged fire. The British recorded that “over eight hundred shells” were shot at the fort.6 After twenty-four hours of fighting both on land and sea, Francis Scott Key waited for the smoke to clear and saw that the American flag at Fort McHenry was still waving high. Key immediately began to write a poem on what he had witnessed that day. The poem quickly rose to fame and gained the attention of almost every single American.7

Very few people know that the poem went through different phases before becoming the American National Anthem. The original title of the poem was “The Defense of Fort McHenry.” Key later added the tune from an old drinking song called “To Anacreon in Heaven.”8 Later, Congress met to decide on a song for the nation; all songs were rejected, including “The Defense on Fort McHenry.” People that opposed the song claimed that the lyrics were too difficult to sing, it was not martial enough, and it was only about one event in all of American history.9 People who supported the song loved that the lyrics were difficult; that way only professional musicians and singers could sing it before certain important occasions.10

While the first stanza of the poem is widely known and sung today, few have been able to appreciate it in its entirety. Here, then, is the original poem:

O say can you see, by the dawn’s early light,
What so proudly we hail’d at the twilight’s last gleaming,
Whose broad stripes and bright stars through the perilous fight
O’er the ramparts we watch’d were so gallantly streaming?
And the rocket’s red glare, the bomb bursting in air,
Gave proof through the night that our flag was still there,
O say does that star-spangled banner yet wave
O’er the land of the free and the home of the brave?

On the shore dimly seen through the mists of the deep
Where the foe’s haughty host in dread silence reposes,
What is that which the breeze, o’er the towering steep,
As it fitfully blows, half conceals, half discloses?
Now it catches the gleam of the morning’s first beam,
In full glory reflected now shines in the stream,
‘Tis the star-spangled banner – O long may it wave
O’er the land of the free and the home of the brave!

And where is that band who so vauntingly swore,
That the havoc of war and the battle’s confusion
A home and a Country should leave us no more?
Their blood has wash’d out their foul footstep’s pollution.
No refuge could save the hireling and slave
From the terror of flight or the gloom of the grave,
And the star-spangled banner in triumph doth wave
O’er the land of the free and the home of the brave.

O thus be it ever when freemen shall stand
Between their lov’d home and the war’s desolation!
Blest with vict’ry and peace may the heav’n rescued land
Praise the power that hath made and preserv’d us a nation!
Then conquer we must, when our cause it is just,
And this be our motto – “In God is our trust,”
And the star-spangled banner in triumph shall wave
O’er the land of the free and the home of the brave.13

I remember learning about this while I was in high school. I did not know the original lyrics however, so reading this was actually interesting how the lyrics changed. I also learned that the it was not our official national anthem until the 1931. I also learned that Key wanted to became an attorney and sang in a church and wrote poems for fun.

This article was very interesting. I never knew the origin or background information of the Star Spangled Banner. It was very inspiring to see it be adopted in the year of 1931. I did not know that they were considering other names before naming it the Star Spangled Banner. I thought it was weird that people thought it was too difficult to sing. In my 8th grade history class, I had to sing this anthem in front of my class and I wish I had known the origin of it. I love this poem and what it has transformed into.

Reading about how Wilson used this song to honor America’s ability to overcome has helped me to recognize how important Americans value honoring historical times. Nowadays we have drifted away from that honor these past couples of years. But, by having a song like the Star Spangled Banner performed at almost all events, it enables Americans to be reminded of the importance of historical battles, such as the battle at Fort McHenry. We should honor those that gave their life to the country.

Wow. I never even knew that there was more to the Star Spangled Banner more than just the first stanza we sing during the national anthem. It definitely makes us reflect on the freedoms we have and not take for granted those lives that have been lost over the course of history in order to preserve the honor and values of this amazing country. I find it unfortunate that such a powerful, uniting, and moving song has become an issue of such divisiveness and debate in today’s America. I’m glad someone chose to write an article portraying the history of the national anthem in a positive and patriotic sense.

I knew that the anthem came from a song sang after a battle but I did not know the battle nor the time when the battle took place. I did not know that it was not until 1931 when it was adopted as the National Anthem. I was surprised that other names were considered for the song and that people found the song really difficult to sing it.

I actually had no idea where the Star Spangled Banner came from or how it came to be used. The fact that the national song was finally accepted in 1931, which is a rather late date, astonished me. I’ve always believed that because it was so motivating, it was accepted as soon as it was written. It is really strange to observe how long it took for it to become normalized and then adopted as the national anthem of the United States.

What a great article! I kind of knew about the battle and how long the battle went. How amazing it was to see the flag still waving. I think it’s really powerful this poem is and how great that key wrote it at the war. I never knew that the lyrics changed. I also didn’t know that it was adopted in 1931. I think that seems kinda late. I wonder why it took so long and why it wasn’t normal for it to be our anthem.

I think this article was amazing especially the fact that I was able to learn more about the anthem. I found the background of the anthem super interesting since I did not know much about it, other than known as the nation’s anthem. In addition, I like the fact that the author added the anthem into the article. I also found interesting how different the words have changed.

This was SUCH an informative article. It always baffles me that everyone knows this song as the national anthem, but most people don’t see that it was a part of a poem and that there are three more stanzas after the first. Personally, if you were to have asked me to say the following line of the song, I wouldn’t have even known where to begin. I like how the author explained how this song came to be, and where it started. Great job.