The War of the Worlds: An Attack on the Fragility of American Life 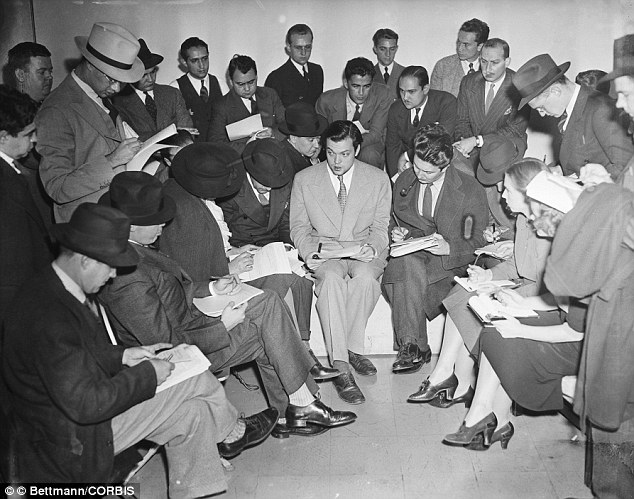 “At least forty people, including six state troopers, lie dead in a field east of Grover’s Mill, New Jersey, their bodies burned and distorted beyond recognition.”1  These were the words heard on the night of October 30, 1938 in homes all over the United States. It was the night before Halloween and the Mercury Theatre on the Air radio show wanted to give listeners a fright in celebration of the upcoming holiday.2 What was meant as a scary story in good fun, sent the listeners of the broadcast into a full blown panic.

The live on air radio production was an adapted story from H.G. Wells’s famous novel, The War of the Worlds. In the novel, the setting takes place in England, and a league of alien spaceships, first thought to be shooting stars and meteors, begin to land. People in the surrounding area grow curious, and decide to venture out and see what all the commotion is. As a man approaches one of the meteors, he realizes it is in fact not a meteor but a hollowed out cylinder. Soon a hatch on the cylinder begins to open and a huge, disgusting creature with long gray tentacles emerges. People begin to flee their homes and panic spreads throughout the town and later throughout England. The aliens attack for weeks, feeding on the blood of humans until finally meeting their deadly fate and falling victim to human bacteria.3

Actor and filmmaker Orson Welles teamed up with one of Mercury Theartre’s writers, Howard Koch to broadcast the show over the CBS radio network. Listeners were enjoying dance music when their program was suddenly interrupted by a report of a meteorite landing. To make the story even more believable, Koch decided to alter the script and changed the location from England to a small village in New Jersey.4 Much of the rest of the story was unchanged and there were “reports” of huge creatures wreaking havoc on the town and killing people with their death rays and poisonous gas. Koch took the story even further and had an actor play the part of a reporter who was live in Time Square and reporting the devastation and destruction of New York City before falling dead himself at the microphone due to an alien attack.5  Another actor on the show who was asked to play an anonymous politician, was able to alter his voice in such a way as to sound almost identical to President Theodore Roosevelt. The “politician” declared a state of emergency and stated that troops were being sent in to help stop the invaders.6

It may seem peculiar that anyone would believe this story as factual, but that is exactly what happened. Koch was careful to make sure there were no commercial interruptions during the program to lend even more authenticity to the special report. There were reports of people all over the East Coast fleeing their homes and some adorned with gas masks remembering that the masks had once been used as a defense against gas warfare in WWI.7  Two geologists from Princeton rushed to the site of the reported meteor landing to get their hands on samples, only to find all was well in the area.8 Radio and newspaper stations were flooded with inquiries about the events reported, demanding to know what was happening. Why would anyone allow themselves to become worked up over a little scary story such as this? To answer that question, one must simply look at the events throughout history prior to and those that transpired during the early 1930s.

The stock market crash of 1929 opened the doors to the Great Depression, which was a time when America saw rates of high unemployment, lower salaries, and increased poverty. In 1937 the German airship, Hindenburg, sailed from Frankfurt, Germany to New Jersey and exploded upon its arrival, killing 36 of its crew and passengers. Between 1934 and 1937, the Midwest experienced a period of drought, loose soil, and high winds resulting in the Dust Bowl, leaving thousands of farmers without crops or livestock for several years. War machines being created in both Germany and Japan caused rising tensions, and people throughout the world were on high alert for a possible attack. The Munich Crisis had recently been broadcast by radio throughout America, and citizens were on alert for invasion.9

Taking into consideration all that had recently transpired in America, one can see why a story of invasion was taken seriously and how it could easily send the country into panic. Sociologist Hadley Cantril said it best when he described the actions of the American people as “anxiety latent in the general population caused by years of economic depression.”10 Even though listeners were told four times during the broadcast that what they were hearing was a dramatization of Wells’s famous novel, the American people were already in such a panic, most did not even hear those words.

Unlike today, news was delivered much slower in the 1930s. People did not have access to social media the way we do today. The War of the Worlds radio broadcast linked Orson Welles to the greatest hoax in the history of broadcasting at the time. If something such as this were to happen in the news today, with the limitless sources to media available, the story would be quickly exposed as the fictional tale it is. The Federal Communications Commission investigated the program, but no laws had been broken and the Mercury Theatre faced no charges. The program had done its job and terrified the American people. At the time the show aired, Americans were still on edge about the possibility of war and this show exposed the fragility of American life.

The War of the Worlds

This was a very interesting topic, I have never heard about this event before. It was funny to see how American’s reacted to the fake radio show. Although, I do think I would have panicked in that day and age too especially if the radio show was never interrupted. It is sad to see America’s fragility, but I believe that we are now stronger with everything we have gone through these past hundred years. I believe that nowadays no one would react as ignorantly as these Americans due to all of the resources we have.

It’s amazing what the media can do to distort the human psyche. They can make one believe in something so strongly. I do think the once the excitement dwindled down it made everyone interested in the story and made them want to read or buy other books like it, in a way the book received advertisement.

this article had my full attention from beginning to end. It is really surprising that a radio broadcast shook so many people up and all that it was for was to scare people a little for Halloween. but you have to take into account that people will believe anything that they hear In the media so the radio back then was onw of the main ways of getting news they would believe it 100 percent.

I’ve heard stories about this, well, story (no pun intended). I can only imagine how frightening and tense this era was and it certainly is believable that people couldn’t have caught on that it was a hoax. As a fellow performer, I am in awe that they were able to make their audience fully believe (to the point of panic) that there was an alien invasion. I am amazed that the fact that the theater got into no legal trouble even though they caused wide spread panic…

Great article! I really enjoyed the details included in this article as well as the pictures that went along with it. I know that this radio show frightened a bunch of people but its honestly kind of funny how a simple radio show could get such a reaction from people. Before reading this article I had never heard about this happening so I was definitely interested in reading this article from start to finish. Overall this was very interesting article that I really enjoyed reading.

It’s really a shame that no one was penalized for throwing the country into such fear. Though, I like to believe that it is because of situations like the article describes that help us move forward and learn to take everything we hear with a grain of salt. Now, I didn’t even know that this was the same author of another article I read until after I finished this one and it just amazing to see the different contexts but the same amazing writhing style.

This is a very well-written and informative article. The story of the frighteningly convincing broadcast of Wells’ now-famous book is reasonably well-known in its own right, but speaking for myself, knowing that people believed the broadcast is one thing, knowing that a full-scale panic developed to the point that even scientific minds investigated the supposed scene of the landing is jarring, and somewhat humorous. The idea that such an outlandish phenomena could occur is given some disturbing grounding once the context of a nation recovering from one of the worst points in its history is brought to light, and the large-scale panic that was reached so easily is indicative. This article brings a story with many facets to life and does so very well.

Looking back it seems almost funny that such an accident could have caused that much trouble. It seems easy to dismiss this as a silly story, but back then it was hard to tell what was real and what was false over the radio. It was intentionally made to seem real and people did not have access to instant messaging back then like we do now. With all of the planning put into it, it must have seemed real to most people.

I was wondering why the people believed this up until I got to the second half of the article. Nobody would fall for this in present time, but considering what the American went through at that time, it is no wonder why it was hectic. The American people were anxious after the war and the depression, thus the broadcast announcement of an invasion would have probably been easily believed.

Wonderful article! I had not heard of this before reading this article, so I was intrigued the whole time while reading. Right now, the incident could be interpreted as a funny situation, but I could understand how scary it must have been listening to the radio broadcast at that time, especially what America was going through at that time. Overall, I thought this was an intriguing and well-written article!