The Wonder Drug of the Twentieth Century: Penicillin 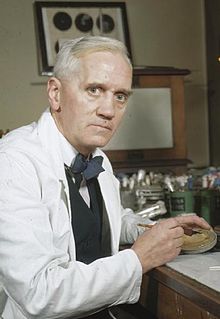 People all over the world began calling it a wonder drug. Penicillin. The discovery of penicillin became a gateway for more transformative discoveries. But shockingly, to our surprise, the discovery of such a crucial drug came about from an accident in an experiment in the laboratory of Dr. Alexander Flemming in 1928.

So who was Dr. Alexander Flemming before he became famous for discovering our “wonder drug” penicillin? He was third of the four children descended from lowland farmers in Scotland. Born in 1881, Alexander’s father died when he was at the vulnerable age of seven. He began his educational enlightenment at a moorland school in a small town called Darvel in Scotland, UK.1 Here, twelve students of all ages were taught in a single classroom. Following this, he attended Darvel School, which was a four mile walk for Alexander every school day. After witnessing his potential, he was awarded a two-year scholarship to attend Kilmarnock Academy in Scotland. After those two years, Alexander moved to London where he lived with his older brother Tom. Many of his brothers similarly fled the life of farming to live with Tom. Hugh, the oldest brother, was the only one left to attend the farm.

At the age of twenty, Alexander worked in a shipping office for four years, before he inherited some money from his uncle John Flemming. It was his older brother Tom who encouraged him to follow the same career as him, a physician, and so he did. Excelling academically, it was no surprise he was awarded a scholarship to St. Mary’’s Hospital Medical School in London. Coming from little money, Fleming sought after a brighter future than the one that was waiting for him at the family farm. His decision illustrates the endless possibilities that can come from what a person chooses to make of their situation.

Alexander Flemming was a scientist beginning another one of his multiple research experiments. He was a professor at St. Mary’s hospital, and oversaw a clinic that focused on patients who suffered from boils. Because of all this, he was asked to write on staphylococci, which is a type of bacteria that causes staph infections such as skin infection and blood poisoning. It was 1928, and he began examining the various properties of staphylococcus. Towards the end of July of that year, Flemming was packed up and eager to return home on vacation. He stacked his plates on the lab bench sitting along with many other plates from previous experiments.2 There were plates that were in desperate need to be washed and cleaned up. But Flemming was known for keeping his plates an extended period of time after incubation.

When he returned from his vacation, on Monday, September 3rd, he examined the staphylococci culture plates. Keep in mind that it was unusual to leave culture plates at room temperature. As Fleming was resuming his usual course of action to be taken for such a typical day, he had remarked to Merlin Pryce, his research assistant, that there was a lot of work to be done. He began by taking the top of the culture plate from a stack of several grimy plates; they had some form of biological research left over from earlier experiments. During this time, he came across an unusual plate. Fleming’s response was, “that’s funny,” while Pryce simply brushed it off as one of the plates that helped Fleming discover lyzosome, which was a previous experiment of Fleming’s. To his surprise, the growth of staphylococcus had been diminished, and instead, the mold had grown towards one end of the plate. That is, the bacteria surrounding the mold was being destroyed. The mold had grown on one side of the plate. The shock wasn’t from the presence of mold, which would probable happen in any biological experiment. Rather, it was the complete disappearance of the cultures of staphylococcus. This told him that there was antibacterial substance in the mold that caused the disappearance of staphylococcus. So he decided to make another culture of the mold in a tube of nutrient broth. After a week of being left in the tube, the culture that was diluted about 500 to 800 times had actually inhibited the growth of staphylococci again. After much research, Fleming discovered that this mold belong to the family of penicilliium and was eventually named Penecillium Notatum.3 This was Alexander Fleming’s aha moment, the discovery of penicillin.

Just imagine conducting an experiment for your organic chemistry or biology lab; resuming your usual routine, you’ve come across a potential discovery. Fleming had no intention of achieving such a discovery. In his research he had described it as a “white fluffy mass which rapidly increases in size…cultures darken to almost black.”4 But we have Fleming and his curiosity to thank in this very moment. Just as Pryce had done in that moment, so could Fleming have chosen to ignore the plate and simply wash away the bacteria from the plate. But Fleming instead decided to explore what he saw as curious. It was this very moment that penicillin was discovered.  Alexander Fleming was a very disorganized scientist. He was known for leaving his plates all over the bench and his experimental items left in the same place for days before cleaning up. Had he been a more organized scientist in his laboratory, penicillin might never have been discovered. One might say it is because of his untidiness that penicillin had been brought to discovery.5

Thus, the accidental discovery of such a drug sparked positive outcomes for the world in multiple ways. It immediately began saving the lives of hundreds of thousands of people who, prior to 1929, could not be saved with such assurance and ease from their sicknesses. Alexander Fleming was a bright scientist, but that is not to say that his discovery of penicillin was intentional. His messiness and curiosity is what allowed him to come across such a life-changing drug. On another note, discovery of penicillin was just a taste of what the medical science community has been capable of, and it sheds light on how much more there is still to be discovered. Penicillin was not the first and definitely would not be the last accomplishment for American medicine and for the world population.