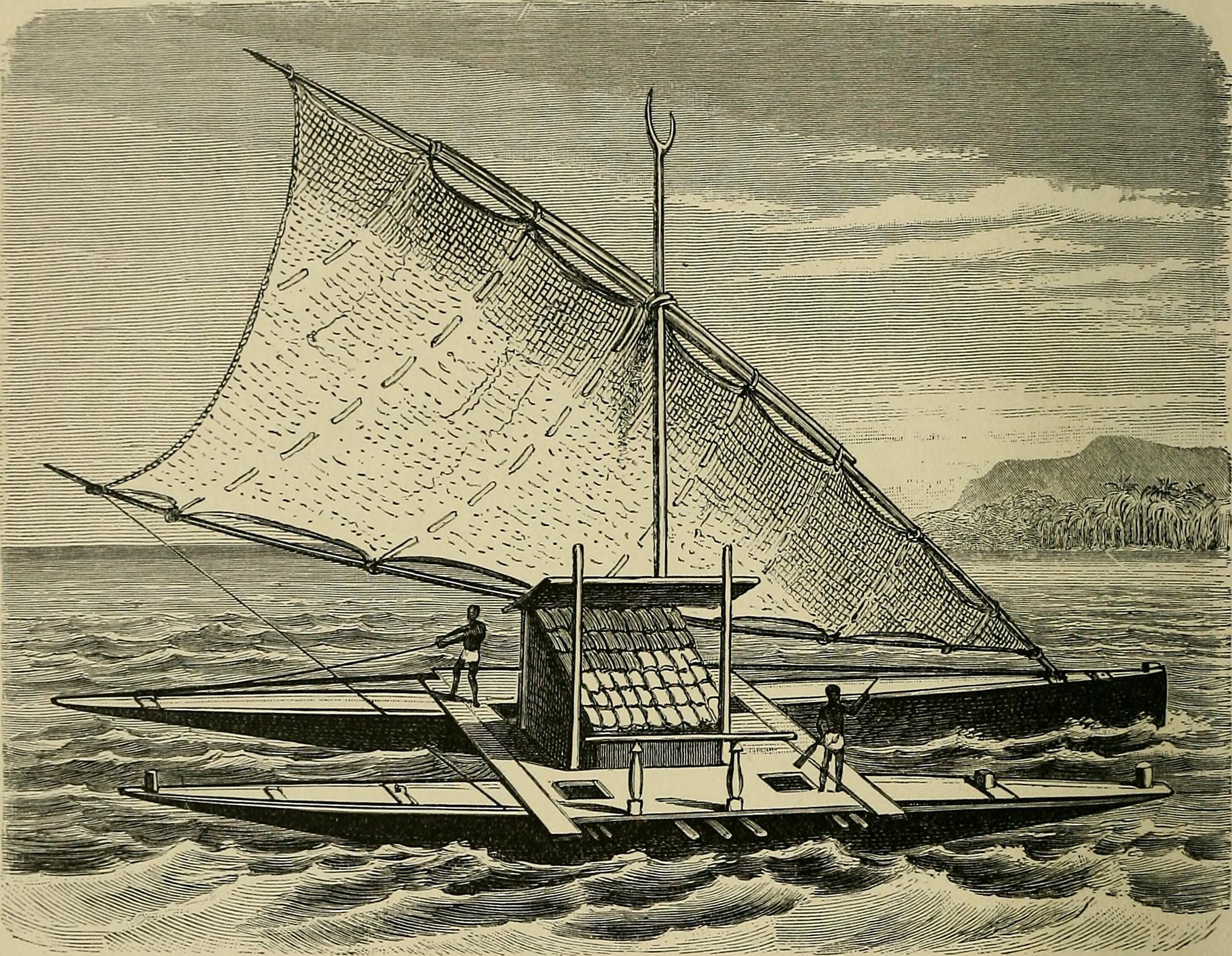 Traditional wayfinders of Polynesia, Micronesia, and Melanesia relied solely on natural elements such as celestial bodies, the winds, swells, the climate, and birds to navigate their way through the vastness of the Pacific Ocean. Traditional wayfinding is the practice of navigating that encompasses these natural elements to provide guidance on voyages. Pacific Islanders shocked early English sailors with their ability to manage long distance voyages, a practice that dates back to about 3000 BCE. This incredible practice begs the question: how were these people able to navigate without any aid from the kinds of navigational tools that we often use today? One answer that has been argued by cultural scientist Harald Haarmann is that they were able to instrumentalize their “refined perception of natural phenomena.”1

Wayfinding was not always recognized as an established talent of ancient Pacific Islanders. Early-modern Europeans believed that early Polynesians had probably drifted off-course during routine travel and accidentally discovered islands throughout Oceania. It was not until Captain James Cook observed the native people of the Hawaiian Islands that the notion that they had advanced navigation techniques slowly started coming into light.2 The earliest estimated movement of people to Oceania was between 3200 and 2800 BCE.3 After more extensive studies, archaeologists today have been able to determine that ancient Pacific Islanders had settled several islands before they came in contact with European settlers. Evidence shows that between 1290 and 1120 BCE, islands of Melanesia and Micronesia were being settled. In another flow of migration between 1120 to 1025 BCE, a period of heavy migration to islands such as Hawaii, Rapa Nui, and New Zealand took place.4 To understand how these voyages were successfully executed without the use of navigational instruments, we will look at some methods that wayfinders used in order to sail their way across the Pacific.

Master navigators began by calibrating their positions according to celestial objects, such as the sun, the moon, and constellations. Stars rise in the East and set in the West. They first chose a primary set of stars and constellations, which they knew would eventually set on specific points on the horizon. When the view of the horizon became obstructed, for example, by clouds, they would need to reference a secondary set of stars in the night sky. When this happened, navigators had to recalibrate themselves “by glancing at any section of the night sky, much as we can by glimpsing any part of a thoroughly familiar room.”5 When faced with challenges regarding the obstruction of their view of the sky, navigators resorted to their observations of other directional indicators to orient themselves. By referencing waves and ocean swells, or by observing certain birds, navigators could find indication of their proximity to land.

There are two forms of fluctuations that navigators referenced when observing the ocean itself. The first were ocean waves. Waves are ignited by local winds, which are winds that are confined to small spatial areas that range “from a few miles to 100 miles in width.”6 Waves were increasingly useful directional indicators when embarking on inter-island travels. On the other hand, navigators referenced swells during long distance voyages because they were not easily influenced by abrupt changes in wind patterns. The endurance of swells can last from a week to a month.7 Their consistency is what allow them to be exceptional directional indicators. Navigators also occasionally referenced certain types of birds to determine their location. While it may be unsure what birds ancient navigators used to detect their proximity to islands, we can look at how those that still practice traditional wayfinding use birds as an aid for navigation.8 There are two birds that serve as the most prominent indicators. The White Tern and the Brown Tern both sleep on islands at night and at dawn they embark on fishing trips. The Brown Tern is known to travel about 40 miles out to sea, while the White Tern can travel as far as 120 miles out. When wayfinders detect these birds in the day, they closely keep track of them. When the sun gets low and the birds retreat, they use their flight paths to indicate the direction of the island. “They know the island is close even though they cannot see it.”9

It is incredible that ancient voyagers acquired the skills to look and feel their way through the Pacific. Their lack of technical navigational tools did not hinder their travels.10 This craft is still heavily practiced throughout Oceania. Although the practice was under threat of modernization and westernization, the Polynesian Voyaging Society, which is based in Honolulu, Hawaii, has gone to great lengths to lead a revitalization of traditional wayfinding.

A well put together article that stayed interesting. I just can’t get over how ancient Pacific Islanders where able to navigate with such precision. Even with todays technology ships get lost for tones of reasons. Thousands of years ago the people had been smart enough to notice that stars acted as a map or how the waves and ocean swells pointed specific directions. It just makes you realize how much we depend on technology.

This is an obviously biased response, but I am confused as to how these navigators (way finders) of the sea were so heavily reliant on stars. I feel that they should have been curios about their dependency on those stars (by nature). With that said, I was aware that such a foot was possible but I still find it very impressive as they were able to employ entirely different techniques as compared to the average naval officer.

I’ve always wanted to know how ancient people navigated the world so well, and through this article I was able to get many answers to that question. It was surprising that they were able to navigate with just natural elements like celestial bodies, the winds, swells, the climate, and birds. It is amazing that by looking at a set of stars, some ocean waves, and even birds like The White Tern and the Brown Tern ancient voyagers were able to navigate their way through the pacific and discover, establish, and inhibit islands and settlements.

This question has crossed my minds many times when thinking about travel in ancient times. How did they do it? Well, this article answered that question for me. What surprised me the most is that people would navigate by positioning of the stars. This leads me to believe that people in the past were much more intelligent that modern day navigators. We often take travel mechanics for granted.

An organized article that remained intriguing. I can’t get over how antiquated Pacific Islanders where ready to explore with such accuracy. Indeed, even with todays innovation ships get lost for tones of reasons. A large number of years prior the general population had been sufficiently shrewd to see that stars went about as a guide or how the waves and sea swells pointed particular bearings. It just influences you to acknowledge the amount we rely upon innovation.

While I am impressed by their knowledge on the stars, I am also amazed by the fact that they used other things, like birds, to help them determine if they were going in the right direction. Imagine how long it took to gather and remember all that information. To know the stars, the wind currents, the waves, and the birds, all of that was by observation and experience which later got passed down from generation to generation. It baffles me that they were able to become master navigators without any kind of aid from navigational tools.

I wonder how accurate these navigation tactics were? Did the stars, waves, and birds give them a general sense a direction, or a more accurate direction? Nonetheless, I doubt it was as accurate as a map and compass, which fascinates me how much they had to familiarize themselves with the environment. I doubt anybody could do this in present time.

This is a very well written and fascinating article. I have always wondered how people traveled in ancient times. I have heard of wayfinding, but when I researched it I did not find a clear explanation of what it was. I like your article because it explains how it was used. It is interesting to hear that the Polynesians used the stars and constellations to navigate through the ocean.

I had never put myself to think on how wayfinders did and do what they did and do, and this article just amazed me when explaining me such a thing. The skills men can develop are certainly a natural construct, a reaction to the need of survival and adaptation. What remains interesting for me, nonetheless, is how this knowledge passed to next generations. Could it be that the oral tradition is a key factor, or would it be a selected group of people that mastered wayfinding? I will certainly look deeper into the topic someday. Great article!

Nowadays, humans are dependent on technology. I believe most people are so accustomed to this new era that in a situation as this one, many would not survive. GPS is at our fingertips. It seems we no longer depend on the celestial bodies, compasses, or weather for sense of direction. I understand these ancient voyagers were very skilled and advanced in their time.